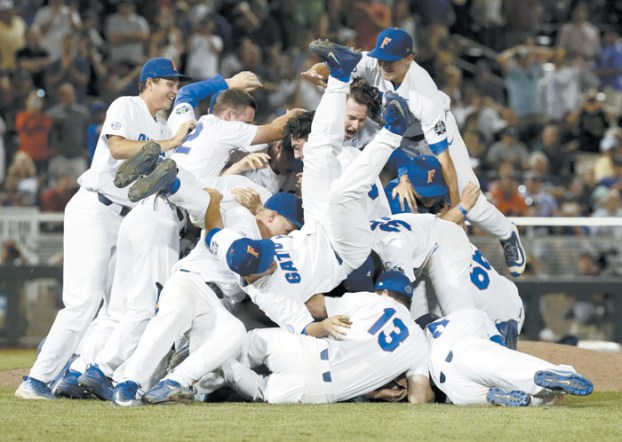 GATORS ARE THE CHAMPS

The Gators scored four runs in the eighth inning to pull away from LSU and beat their Southeastern Conference rival 6-1 Tuesday night to complete a two-game sweep in the College World Series finals for the 103-year-old baseball program’s first national title.

Florida (52-19) posted the eighth sweep in the 15 years of the best-of-three finals format, and first since 2013. LSU (52-20) lost for the first time in seven appearances in a championship game.

“Just a gritty group, that’s all I can say,” said O’Sullivan, the 10th-year coach who had brought the Gators to Omaha six of the last eight years. “There are other teams that may be bigger and stronger, our starting pitching has carried us the whole year, but we got some timely hits.”

Florida was in the CWS for the 11th time and previously had made it to the finals in 2005 and 2011, getting swept each time.

“They’re a very deserving national champion,” LSU coach Paul Mainieri said. “I’m happy for Kevin. He works hard, and he has had several teams that maybe were even better than this team and sat up here as disappointed as I am right now. Finally got his championship.”

Freshman Tyler Dyson (4-0) limited the Tigers to three hits in six innings in only his second start, and the Gators capitalized on LSU errors in the first and second innings to go up 2-0 against Jared Poche (12-4).

Things got interesting after Michael Byrne relieved Dyson in the seventh. LSU pulled to 2-1 and would have tied it if not for Jake Slaughter being called for runner interference at second base for sliding into shortstop Dalton Guthrie’s leg as he was throwing to first to turn a double play. Josh Smith, who had run home, was sent back to third, and Beau Jordan flew out to end the inning.

Kramer Robertson punched a single into right field leading off the eighth and took second on a wild pitch. The Tigers had runners on the corners when Cole Freeman beat Byrne’s throw to first for a bunt single. After Byrne struck out Antoine Duplantis, Jackson Kowar, who would have been Florida’s starter in Game 3, came on to face Greg Deichmann.

Deichmann grounded Kowar’s first pitch to first, and JJ Schwarz threw out Robertson at the plate on a play that stood after a video review. Zach Watson, the Tigers’ hottest hitter in the CWS, then flew out to end the inning.

The Gators scored four times in the bottom of the eighth. LSU reliever Zack Hess hit a batter with the bases loaded, Deacon Liput hit a two-run single and Schwarz had a sacrifice fly.

Last year was supposed to be O’Sullivan’s best chance to win it all. The Gators were the No. 1 national seed for the NCAA Tournament, and they had eight players who were taken in the first 10 rounds of the 2016 Major League Baseball draft. They went two games and out.

Florida this year brought back one of the nation’s top weekend rotations in Alex Faedo, Brady Singer and Kowar and a reliever in Byrne who led the country with a school-record 19 saves. Complementing the pitching was a defense that ranked in the top 10 in the country.

All that was missing was consistent offense. The Gators came into this game with no everyday player hitting .300, and they were ranked 227th out of 300 teams with a .258 batting average.

The pitching overshadowed all shortcomings, and the Gators ended up with the No. 3 national seed after sharing the SEC regular-season title with LSU.

Faedo, the Detroit Tigers’ first-round draft pick earlier this month, was the national leader in strikeouts and Singer ranked 11th. Coming into Tuesday, the pitching staff had combined to strike out at least 11 batters in eight straight games. Singer set a CWS finals record with 12 Ks in a 4-3 win Monday.

“I don’t think anybody thought we would get to this point,” O’Sullivan said. “We had our struggles throughout the year offensively. In mid-March we were hitting about .230 as a team. They kept working and believing, and I told them before the season started that we had what it took, the ingredients, to pull this thing off.”

Faedo was named the Most Outstanding Player after two strong starts against TCU. Faedo allowed five hits and no runs and struck out 22 in 14 1/3 innings against TCU.

By David Shaw sports@salisburypost.com SALISBURY — The 18-game, season-opening winning streak is done, but quite obviously Rowan County is not.... read more