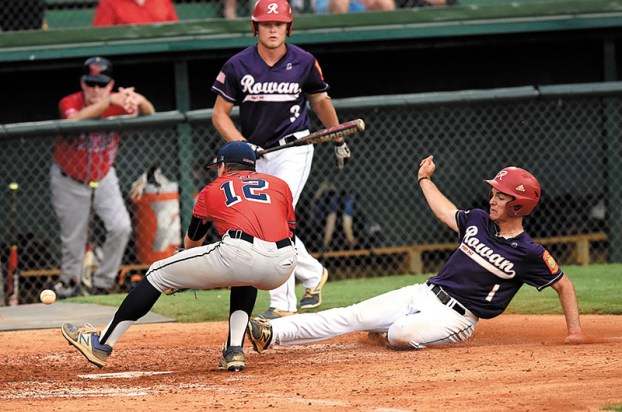 SALISBURY — The 18-game, season-opening winning streak is done, but quite obviously Rowan County is not.

Post 342 gave the adding machine another workout Monday night at Newman Park, where it dismantled Concord and clinched the Southern Division title.

“Nobody’s talking about it any more,” cleanup hitter John Owen said after Rowan prevailed 18-3 in seven innings. “We weren’t going to go undefeated all year. That pressure’s been relieved, and now it’s even more fun to play. We just have to go out and score runs and win ballgames.”

Rowan (21-1, 7-0) did both last night, collecting 15 hits and winning its third straight game. Owen provided the spark with a second-inning sacrifice fly and his teammates poured 93 octane on the blaze.

“We’re doing what we’re supposed to do,” said coach Jim Gantt. “We weren’t trying to go undefeated. It just worked out that way. We’re just trying to get better each day and the guys have done a good job.”

Post 51 coach Jaymie Russ made no excuses after Concord (11-4, 4-4) lost for the fourth time in its last five games.

Concord reached winning pitcher Griffin Myers for two runs in the top of the first inning. The right-hander worked at a deliberate pace — tip-toeing around base hits by Hayden Radford and Brett Laws, a costly infield error, a walk and losing pitcher Grayson Huneycutt’s sac fly.

“I had to calm down,” Myers said after winning his fourth game. “(Pitching coach) Russ Weiker came out and said my tempo wasn’t right. I was taking too long between pitches. He said to get the ball, get back on the rubber and throw the next pitch. Once I found some rhythm I started locating the ball a little better.”

“He just worked slow,” Gantt said. “It’s hard to play defense behind that. It felt like he was throwing one pitch every five minutes — and it was a ball. He had to fix that. Sometimes he’s just wild enough to be effective. And sometimes that’s good enough.”

It was as soon as Rowan opened the spigot and poured out 16 runs over the second, third and fourth innings. RC went ahead 6-3 against Huneycutt when Chandler Blackwelder’s third-inning grounder was misplayed into a two-run error. In the fourth, the leadoff hitter who can hit fastballs in his sleep right now launched a 3-2 pitch from Concord reliever Jacob Allred over the wall in left-field for a three-run homer, providing a 13-3 lead.

“He’s one of our best right now,” Myers said. “Just seeing the ball so well.”

The supporting cast included birthday-boy Henderson Lentz, who sprayed a couple of groundball singles to left and stole another base. Lee Poteat had three hits and coaxed a bases-loaded walk in the second. Owen added a two-run double and Tanner File — back at second base for the third straight game — contributed two singles, a walk and three runs scored.

“It’s hard to say if this is something special,” said Poteat. “It hasn’t gone to anybody’s head, but with every game our hitters are gaining more confidence.”

Owen went a step farther. “I wonder what it’s like to be a player on another team, preparing to play us,” he said. “That’s got to be hard.”

By Marny Hendrick sports@salisburypost.com CHINA GROVE — It was a very productive weekend for the “old” guys in the 15th... read more