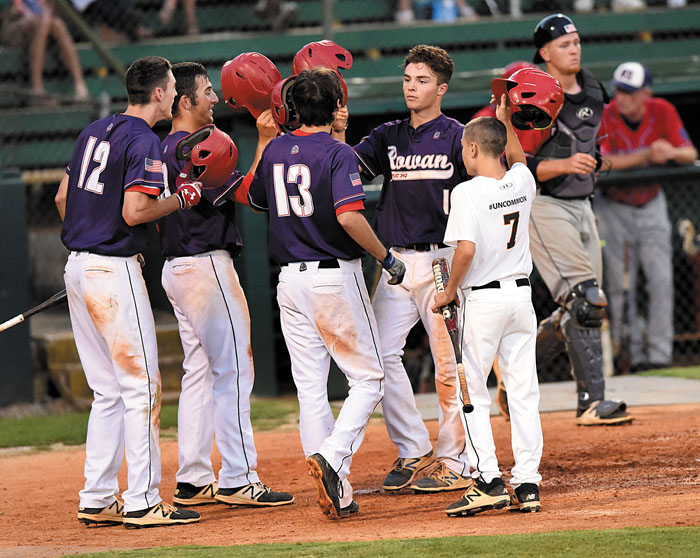 Rowan remained unbeaten at home by pummeling Stanly County, 17-7. Stanly fought at the plate, slapped singles all over the place and seemed to have two men on base all night, but Rowan still applied the mercy rule, finishing the evening relatively early with three runs in the bottom of the seventh.

“Just same ol’, same ol’, I guess,” Blackwelder shrugged, after Rowan (22-1, 8-0 Southern Division of Area III) plated double-digit runs for the 14th time and won via the 10-run rule for the seventh time. “Everybody in the lineup is getting on base. That helps out a lot.”

In its 18 games against North Carolina opponents, Rowan has scored 222 runs. That’s 12.3 runs per game.

The guys at the bottom of the Rowan lineup are getting on base constantly — No. 8 hitter Tanner File walked three times on Tuesday — and that helps explain how Blackwelder, Rowan’s leadoff man, already has produced 32 RBIs.

It also helps that Blackwelder, who is headed to UNC Pembroke, has become a monstrous hitter — .369 for the Rowan Legion team last summer, and .438 for East Rowan High this spring. West Rowan had a terrific pitching staff, and Blackwelder raked 9-for-13 against the Falcons, which gives you some idea of what he can do. This summer, Blackwelder has just gone berserk. He had a double and triple on Sunday and homered on Monday. On Tuesday, he had a triple and four singles.  He’s going to hit .400 this summer, and he might challenge .450.

“This is definitely the hottest I’ve ever been  in my life,” Blackwelder said. “I had one bad swing tonight, swung at an outside pitch, got under it and hit a fly ball, but the rest of my at-bats were pretty good. I don’t mind those singles. I’ll take them.”

After Rowan starter Joe Harrison pitched out of a second-and-third jam in the top of the first, Blackwelder triggered an eight-run Rowan explosion in the bottom of the inning. Owen’s three-run homer, his third, put Rowan on top quickly, and Stanly miscues helped extend the inning and turned the lineup over. On his second at-bat of the first inning, Blackwelder’s bases-clearing triple made it 7-0.

“The right fielder was playing me shallow and the ball got over his head,” Blackwelder said. “It was a hanging curveball, and I did my best to stay back on it.”

Henderson Lentz singled home Blackwelder,  and Harrison had an 8-0 cushion to work with.

After Lee Poteat, Owen and Hayden Setzer knocked in runs in the third, that cushion swelled to 11-0.

Harrison lasted 4 2/3 innings before Olen Stamper relieved him and got the last out in the fifth.

Harrison allowed 11 hits, but they were all singles. Two of the four runs he allowed were unearned. He only walked one, and his defense helped him out by turning a double play up the middle to end the third inning.

“Joe pitched better than it sounds,” Blackwelder said. “They didn’t hit that many balls really hard, but  a lot of balls found holes and some balls fell just over the heads of the infielders.”
Stanly (9-10, 3-5) scored three runs in the fifth and three more in the sixth to get as close as 13-7, but Rowan’s offense simply went back to work and finished off the visitors. Chandler Lippard’s double off the wall triggered the three-run seventh.

Stanly got three hits each from Jake Allen and Kameron Batten and  a two-run double from Noah Crisco. Stanly had a better showing than it did in a 22-0 loss to Rowan at Montgomery Park, but it still fell well short of an upset.

Rowan will rest today and will travel to Mocksville on Thursday and Concord on Friday.