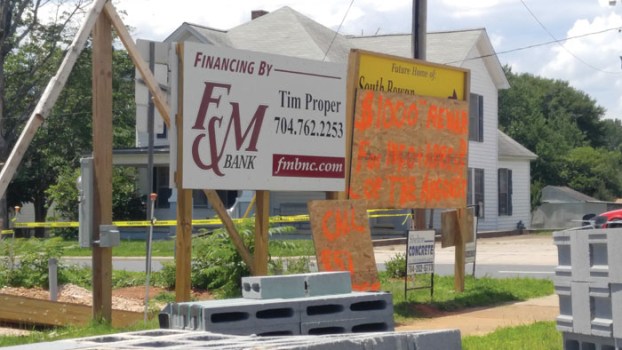 This homemade sign shows a $1,000 reward being offered for information that leads to the arrest, conviction of whoever set a fire inside the China Grove Animal Hospital being constructed now. The damage was confined to a section of the building, but investigators are working to determine who intentionally set the fire. Shavonne Walker/Salisbury Post

CHINA GROVE — Rowan County fire investigators hope someone may have seen something the night a fire was set inside South Rowan Animal Hospital, which is currently under construction.

The fire was discovered about 9:30 or 10 p.m. June 20 and was contained inside the building, said Fire Investigator David Sells.

The building is at North Main and East Church streets, the site of a former Cannon Mills plant. There was no structural damage except for the concrete flooring and some ruined building supplies, he said.

An accelerant was used to start the fire, Sells said.

Construction superintendent Shaun Freeman said the fire caused divots in the floor that will have to be chiseled away. The construction crew will cut away a large section of the floor and replace the damaged portion.

Freeman said firefighters used Oil Dri, a product used to soak up accelerant, and put sawdust on the spot as well.

SALISBURY — Richard Reinholz wanted to figure out how to make a summer basketball league affordable. Reinholz — executive director of the J.F.... read more