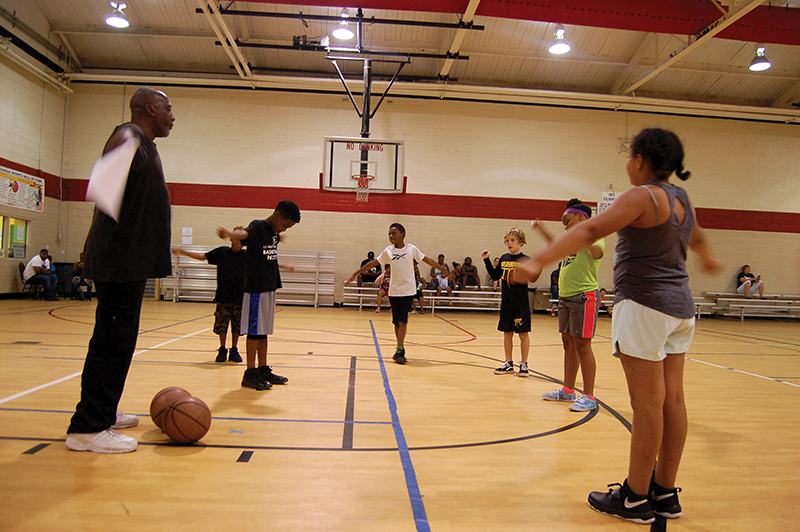 Coach Steve Jordan and his team loosen up their shoulders before they practice lay-ups. (Jessica Coates/Salisbury Post)

SALISBURY — Richard Reinholz wanted to figure out how to make a summer basketball league affordable.

Reinholz — executive director of the J.F. Hurley YMCA — wanted to make the program as accessible as possible, especially to underprivileged youth. He organized it with JLT Fieldhouse and the Salisbury Parks and Recreation Department.

But Reinholz didn’t realize just how many kids would take advantage of the opportunity.

“We were shooting for 150. We were going to be happy with 100 to 120. But having 187 in the short time we started advertising, in my opinion, is a success,” Reinholz said in an interview last week.

Since then, according to Antwuan Thompson, founder of JLT Fieldhouse, registration has increased to 197 participants.

In order to make the program as affordable as possible, Reinholz got a grant from the Robertson Foundation. The grant allowed the league to charge $15 per child for the two-month-long program.

“We don’t want this to be some college-level training, with the coaches teaching only X’s and O’s,” Thompson said Monday. “It’s about character building and basketball.”

Although each organization has held basketball programs separately in the past, this is the first time the three have joined together.

“We are thrilled with the idea of giving youth something productive to do during the summer, especially in early evening,” said Reinholz.

Steve Clark, who is in charge of athletics and programming at Hall Gym, said the program provides a place for kids from different parts of Rowan County to meet each other.

“It’s not like they’re playing on their school basketball team. We’ve got kids from all over the county,” Clark said. “There’s a big nucleus from inside Salisbury, but some from outside as well.”

The program began June 12. The participants will practice once a week for two to three weeks, then play two games a week until the season ends Aug. 19.

They will also participate in free basketball clinics put on by JLT Fieldhouse at Salisbury Academy.

Registration is closed for this year’s program, but Thompson said he expects the league will only get bigger next year.

For more information about the summer league, email Thompson at coacht@jltfieldhouse.com.