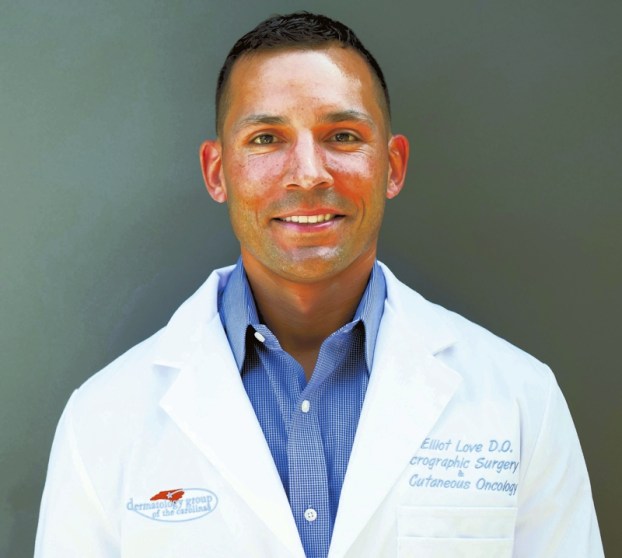 Dr. Elliott Love was one of 115 "American Ninja Warrior" contestants who were in the show's regional competition held in Daytona, Fla. in April. Submitted photo

Salisbury doctor might be on ‘American Ninja Warrior’ tonight

SALISBURY — Dr. Elliott Love and his family will be glued to tonight’s episode of “American Ninja Warrior” on NBC, because one of the contestants tackling the show’s obstacle course could be Love.

The show airs at 8 tonight on WCNC, Charlotte.

Love was one of 115 competitors who were part of the show’s regional competition held in Daytona, Fla., in early April. He is bound by a non-disclosure agreement to keep the results of that regional to himself until after the episode’s airing tonight.

So there’s no guarantee Love’s performance on the obstacle course will make the show’s final cut, although 15 people from the regional qualified to move on to the championship in Las Vegas.

Love, 39, is a doctor/surgeon in the Salisbury office of the Dermatology Group of the Carolinas. He and his family — wife Kassie and sons Landon, 10, Bennett, 8 and Miles, 6 — live in Davidson, and Love trained for “American Ninja Warrior” at Kinetic Heights Challenge Center in Charlotte.

The whole family accompanied Love to Daytona in April, and when it came time for him to take on the course, which had 10 obstacles, they were allowed to follow his every move on the sidelines.

The Loves were in Daytona for four days, April 5-8. Love acknowledged he was one of the older competitors. The only contestant he met who was older was a 65-year-old man who Love thinks viewers will definitely see tonight.

“American Ninja Warrior” held regionals in Los Angeles, San Antonio, Daytona, Kansas City, Cleveland and Denver. Love applied to be a contestant on the show in December 2016 and learned in March, about a month before having to be in Daytona, that he had been selected to be among the 115 competitors.

It was a conversation with his oldest son, Landon, that led to Love’s application. They were watching an episode of “American Ninja Warrior,” and his son asked, “Dad, do you think you could do that?”

Love answered that he thought he could, and Landon issued the ultimate challenge when he asked, “Why don’t you do it?”

Love said he has coached his sons in football, basketball, baseball and soccer over the past six years and has always told them they could do anything, if they practiced and set their minds to the tasks at hand.

How could he not try out for “American Ninja Warrior?”

Love is 5 feet, 10 inches and for the show weighed about 180 pounds. He said the obstacle course takes a combination of strength, agility, balance, foot speed and even acrobatics worthy of Spiderman.

“It has been amazing,” Love said of the whole experience. “I got to go down and meet some great people.”

The Post will have an updated version of Love’s “American Ninja Warrior” in Tuesday’s print edition.

“Tune in to watch and see,” Love said Monday afternoon. “I’ll be doing the same.”

By Mark Wineka mark.wineka@salisburypost.com GRANITE QUARRY — The Granite Quarry Board of Aldermen will hold a public hearing on the... read more