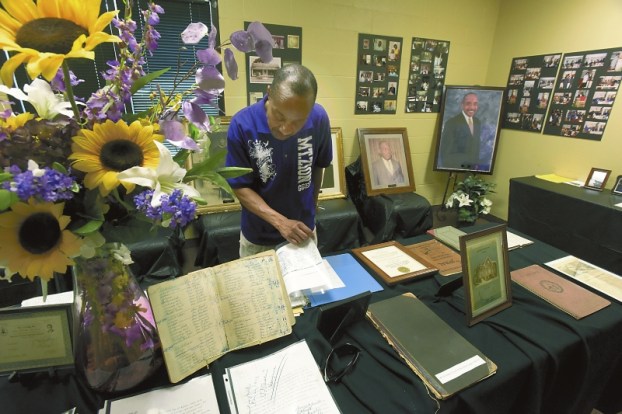 Rev. Nilous Avery, II looks over the slavery records of the founding father Rev Harry Cowan who was formerly a slave. Mt Zion Missionary Baptist Church is celebrating their 150th anniversity as a church. They are establishing a history room with many photos and records from the 150 years.They have photos of their former pastors. They have had only 7 pastors in 150 years. In this photo from right to left: Dr. S.R. Johnson, Jr, Dr. William M. Wyatt, Dr. Fisher R. Mason. photo by Wayne Hinshaw, for the Salisbury Post

SALISBURY — Lauresa Robinson is usually the person you go to for information, a trait she admits that usually leaves others declaring, “Well, ask Lauresa. She would know.” Robinson, 86, is indeed someone who knows. She has a wealth of memories of the days gone by at Mount Zion Missionary Baptist Church, a place she’s been a part of practically her whole life. She was on hand for the church’s sesquicentennial celebration this weekend.

Mount Zion Missionary Baptist was founded by the Rev. Harry Cowan and is the second oldest African-American church in Rowan County, right behind First Calvary Baptist, which was also founded by Reverend Cowan.

“It’s a moment of reflection and rejoicing. We are reflecting on the legacy and history of the church,” said Dr. Nilous Avery, pastor of Mount Zion.

In 150 years, Avery is only the seventh pastor of the church, with Cowan being the first. Cowan was known as the father of the state convention. Avery is the current president of the General Baptist State Convention of North Carolina. The convention, like the church, is 150 years old.

Church members, family, friends and the community gathered Saturday for a tailgate-style cookout that featured a barbecue and best homemade dessert contest as well as other activities. It was also a time to unveil the history room, which contained the many historical documents, portraits and personal pictures collected by the church and its members.

Robinson recalled attending the church with her mother as early as 7 years old. Robinson had nine siblings and she was next to the youngest. They would attend an afternoon service called the Baptist Young People Union. Her sister was an usher, but young Lauresa sang in the choir.

“I used to sing first soprano,” she said, but that was before her surgery about five years ago.

Dr. Waverly Camp Jr. was the organist and “he could play that thing,” Robinson declared.

The 1880 pipe organ that Camp played is still housed at the old church and underwent a restoration 37 years ago.

Many church choirs nowadays don’t march in, but decades ago it was a signal that the choir was in the sanctuary and were about to sing.

Robinson is one of the oldest members at Mount Zion behind Fannie Holmes, 97, Jessie Wood, 97, and Margaret Santino and Nora Lee Robinson. The women worshiped in the old Mount Zion, on North Church Street, that replaced Cowan’s original church, which was destroyed by a fire. The current church building, tucked at the end of Shirley Avenue, was constructed in 2004.

“My great-granddaughter was a baby and my grandson was seven when the new church was built,” Robinson said.

It’s likely that not that many people knew what hidden treasures were in an upstairs room of Mount Zion Missionary Baptist Church. The treasures were near perfectly preserved portraits of the founding pastors. Although the congregation no longer meets in the North Church Street building, the rich history of the church and its parishioners was birthed in that building.

Cowan, a slave who was given traveling papers to preach to other slaves throughout the area and the state, was considered the father of African-American Baptists in North Carolina and Rowan County. He served as the first pastor from 1867 to 1891.

The second pastor was the Rev. H.R. Minifield, then the Rev. John Washington, Dr. Fisher R. Mason, Dr. William M. Wyatt, the Rev. S. R. Johnson and Avery, the current pastor who has headed the church since 1993.

Some of the documents inside the history room include portraits of all of the pastors with the exception of the Washington, who was a missionary. One of the oldest documents is an 1896 deed for the old church property. In 1986, the church was placed on the National Register of Historic Places.

Mason’s wife, Fannie Mae, started a school out of the church. There’s also church Sunday school ledgers that detailed how much members gave in the offering. A marriage license of the Rev. Harry Cowan is also on display as well as bylaws, pictures of church events, church bulletins and funeral programs.

In addition to the history room, the church has begun a pictorial directory, which will have a picture of every single member and as many former members as can be gathered.

By Shavonne Walker shavonne.walker@salisburypost.com SALISBURY — Vonda Jenkins-Kimrey, along with her wife Carla, and their daughter Carlee Jo, 2, were... read more