JKK Foundation hopes to save children’s lives with helmets 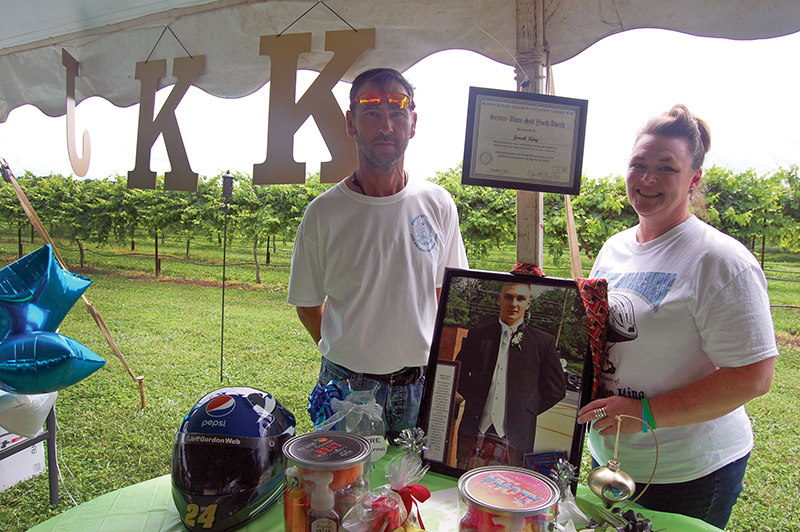 Kenneth and Jackie King pose next to a photograph of their late son, Jonah. The Kings started the JKK Foundation in honor of him after he died in a 2012 skateboarding accident.

SALISBURY — Under a large tent at Cauble Creek Vineyards Saturday, Jackie King talked about how her son Jonah reacted to the idea of being an organ donor when he was getting his driver’s license.

“The lady said, ‘Would you like to be an organ donor?’ And he said, ‘Heck yeah. They can have everything, I’ll be in heaven,’” Jackie said.

That happened when Jonah was 16. Less than a year later, in July 2012, he died in a skateboarding accident. He was not wearing a helmet.

“I would complain at him all the time, put your helmet on. And, you know, he was 16. He made a choice, he made a bad decision. If he had had his helmet on, he’d be alive today,” Jackie said.

Jonah’s organ donations touched the lives of 68 people, according to Jackie.

But that’s not the only positive thing to come out of the tragedy.

In the years since their son’s death, Salisbury resident Jackie and her ex-husband, Fayetteville resident Kenneth King, founded a nonprofit organization — the JKK Foundation — to make sure no family would suffer the same loss they did.

“Did I ever think this would happen? You know, I wasn’t the dad that was, ‘You’ve got to have a helmet on your head,’ ” Kenneth said. “No, I didn’t think it could happen. So it’s changed the way we look at things, my whole family. If we can prevent a child from having a traumatic head injury from riding a skateboard or a hover board or a bicycle, then that’s the whole point.”

On Saturday, the King family hosted the sixth annual Jonah’s Helmet event at Cauble Creek Vineyards. They have hosted this event every year since Jonah’s death, usually on the Saturday before his birthday — June 28.

At the event, both the family and volunteers collected helmets, roasted hotdogs and played corn hole with guests.

Over the course of an average year, the organization collects and donates between 1,000 and 1,500 helmets and gives them to charities in both Salisbury and Fayetteville.

The organization particularly emphasizes getting helmets to underprivileged children, according to Kenneth.

Kenneth said that bicycles are commonly donated during Christmas as gifts for underprivileged children. But he said it’s less common for the bicycles to be donated with helmets.

“My family and I, as well as some volunteers, we physically put the helmet on every child. They come through in a line and I’m the first person they get to talk to,” Kenneth said. “You know, I can’t swear that every one of them leaves there with that helmet on their head, I can’t swear that they wear it after that day, but I do know for a fact that I gave them the choice.”

In the next few years, the Kings hope to make the organization’s mission a national movement, like Mothers Against Drunk Driving, said Kenneth.

Kenneth cited a Centers for Disease Control and Prevention study that said 26,000 young people go to the hospital every year because of traumatic head injuries caused by bicycle accidents alone.

For more information on the JKK Foundation, visit jkkhelmetfoundation.com.