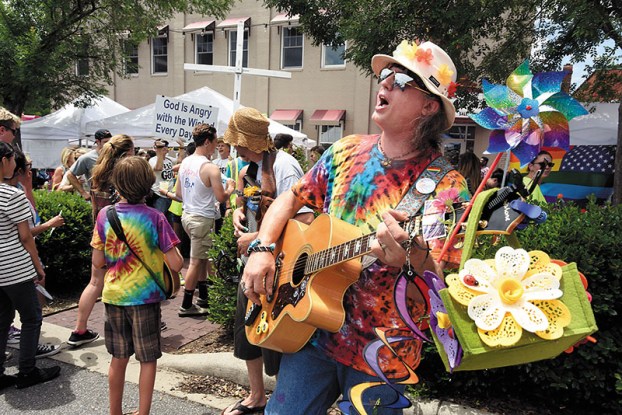 CJ Peters, right, and Elliott Smith, back to camera, and Kent Smith sing as they move around on Fisher Street during the 2917 Salisbury Pride Festival. Wayne Hinshaw / for the Salisbury Post

SALISBURY — Vonda Jenkins-Kimrey, along with her wife Carla, and their daughter Carlee Jo, 2, were all smiles as they greeted friends while walking together at this year’s Salisbury Pride event. The couple, who were one of Rowan County’s first same-sex couples to obtain a marriage license, have been part of the Pride event for years.

The Kimreys always have a good time at the “family-friendly” event, they said.

This year marks the seventh year for the annual Salisbury Pride event, which was held Saturday between Lee and Fisher streets.

Vonda said she felt as though the entertainers are what set the Salisbury Pride apart. The entertainment is why many the people attend.

“That’s one of the biggest draws,” she said.

Some of the most colorful hair, makeup, and clothing was worn during Saturday’s Salisbury Pride event, which in a way became an expression of the kind of colorful event. Friends Haiden Mathis, along with her sister Rose Hulce, best friend Sydney Mitchem and their friend Camdyn Ballard wore colorful hair, T-shirts and makeup.

Hulce said she dyed her hair turquoise because she wanted to be out there with her look and included rainbow-colored lipstick. The teens said they felt free at the event.

Of the protestors and naysayers, Hulce said, “people who are against us should know we’re not going to be broken down.”

There were dozens of performers from as far as New York and Las Vegas and as locally as Salisbury and Charlotte who took to the main stage that bordered Fisher and Lee streets and dance stage on Fisher Street.

Cierra Nichole was one of those local entertainers who performed during Saturday’s event on both the main and dance stage. Nichole, a drag performer whose real name is Tony Land, was born and raised in Salisbury.

Nichole has performed at the event for five years and has served on the Salisbury Pride board for the last two years. Nichole, who lives as a male, said he didn’t identify as being gay until he was 20.

“I felt there was no place for me but in bigger cities like Winston and Charlotte,” he said.

It was an eye-opening experience that he said it’s not just about being LGBT, but it’s about “coming together and having some fun,” he said.

He’s at home at the event where he can “come out to see people and enjoy the festivities and have a good time.”

The down-to-earth atmosphere makes it easy to interact with the audience, Nichole said.

He encouraged everyone to put aside their preconceived notions of what the Salisbury Pride is about and just know it “is made for family fun.”

“Our job is to let people forget the problems they have at home and enjoy being in the moment,” Nichole said.

Kourtinee Pope-Kollins, the reigning Miss Charlotte Latin Pride, was on hand to not perform, but support the event in general. Pope-Kollins was stopped numerous times by some people at the event to pose for pictures. Pope-Kollins wore a humongous crown that was jokingly referred to as weighing about five pounds.

There were 101 vendors with people from all over the southeast, organizers said, more than three times the amount of the first year. The event’s first year was in 2011 and there were 30 booths.

The event seemed to not be without its share of protestors shouting at passersby and carrying signs. Pride event volunteers were scattered throughout the area wearing their rainbow tie-dyed shirts with the words peace keepers on the back. There was one minor incident where an event goer and protestor exchanged angry words and got very close into each other’s faces. The two were quickly separated by event volunteers and Salisbury Police.

“They have a right to be here too,” event volunteer Leslie Cataldo could be heard telling the event goer and carefully patting him on the shoulder.

Salisbury Police officers walked throughout the event as did event volunteers making sure everyone was safe. This year was the first time the police department had a recruiting booth at the event.

This year’s award recipients were Margaret Almeida and Steve and Lina Drinkard. Almeida received the Ralph Ketner Ally award for outstanding community leadership. She moderated the Trans Forum this past year. She is currently a pastor at Second Presbyterian Church in Salisbury. Previous winners have been Ralph Ketner, the Cataldo family, Ashley Jo Farmer, William Stanback, Mike Clawson and Sue Day Whitley.

By Shavonne Walker shavonne.walker@salisburypost.com SPENCER — Leroy Burch isn’t fond of museums, but that’s where he thought his son and... read more