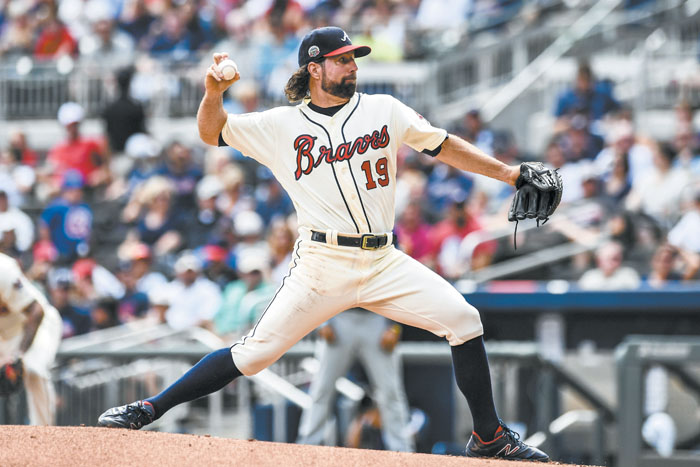 ATLANTA (AP) — Brandon Phillips is thriving in his Atlanta homecoming. He’s motivated to make it last as long as possible.

Phillips gave Atlanta the lead with a two-run homer in the third to continue his productive homestand, R.A. Dickey threw seven strong innings and the surging Braves beat the Milwaukee Brewers 3-1 on Saturday.

Phillips has homered in three straight games after delivering game-winning hits in back-to-back games against Miami on June 17-18, early in the 10-game homestand. Phillips, 35, is hitting .306 with seven homers.

“I’m just happy the Braves gave me the opportunity to come home and play in my hometown like this,” said Phillips, who attended Redan High School in Stone Mountain, Georgia, part of metro Atlanta.

“Hopefully I can do it more than one year. Hopefully things can work out the way everybody in this clubhouse is thinking.”

A continued upswing by the Braves could make management more willing to keep Phillips past the trade deadline. The Braves (36-38) have won four straight and nine of 12. Atlanta is only two games under .500 for the first time since having a 6-8 record on April 19.

Dickey (6-5) allowed one run in seven innings to improve to 5-1 at SunTrust Park. He had control of his knuckleball as he gave up five hits with one walk while winning his third straight home start.

“He was getting ahead of guys, working it both ways, more left to right than up and down,” said Milwaukee’s Travis Shaw, who said Dickey was even tougher to hit when shadows became a factor in the middle innings.

“Throwing consistent strikes like that makes it tough,” Shaw said.

The Brewers’ lead over second-place Chicago in the NL Central fell to one-half game.

Phillips had two hits, including the homer off Matt Garza (3-4) into the Brewers’ bullpen behind the left-field wall. The homer drove in Ender Inciarte, who singled.

Jim Johnson gave up a single to pinch-hitter Jesus Aguilar with two outs in the ninth before striking out Lewis Brinson for his 15th save in 20 chances.

Keon Broxton led off the game with a single off Dickey. He stole second and later scored on a fielder’s choice grounder by Hernan Perez . Dickey did not allow more than one baserunner in any inning after the first.

Phillips homered in four straight games with the Reds on May 4-7, 2016.

Phillips celebrated his son Micah’s fourth birthday by wearing special cleats adorned with his son’s name and favorite cartoon characters. He and most Braves players also wore their pants up high, near the knees, because that is Dickey’s style.

“We had to do something different for R.A.,” Phillips said.

Catcher Tyler Flowers and first baseman Matt Adams were the only starters to have their pants cover their socks, as normal.

Outfielder Nick Franklin, who was not in the starting lineup, was ejected by second base umpire Jerry Meals in the first inning. Franklin and others in the Brewers’ dugout were apparently objecting to the amount of time given the Braves to consider an appeal on Dickey’s pickoff attempt on Broxton at first base.

It was Franklin’s first career ejection, and it left manager Craig Counsell with a limited bench.

“You can’t get ejected there,” Counsell said. “… Puts you behind the eight ball. Somebody else should do the arguing there.”