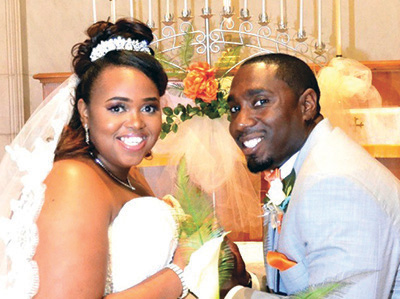 Rev. Dr. Earl C. Johnson officiated the 4 p.m. ceremony, which was followed by a reception at Livingstone College School of Culinary Arts and Hospitality Management.

The groom is the son of Mr. and Mrs. Benjamin and Suzette Davis Sr. of Salisbury. A 2000 graduate of West Rowan High School, Justin received a Bachelor of Arts degree in Communications and Theatre Arts from Western Carolina University in 2005. He is also a member of Phi Beta Sigma Fraternity, Inc. and an All-Conference Star in Track and Field while attending Western Carolina University. He is currently the Head Track and Field and Cross Country Coach at Livingstone College.

Following a seven day Caribbean cruise on the Carnival Cruise Line, the couple are making their home in Salisbury.