Landis man killed when mo-ped crashes, pins him under car 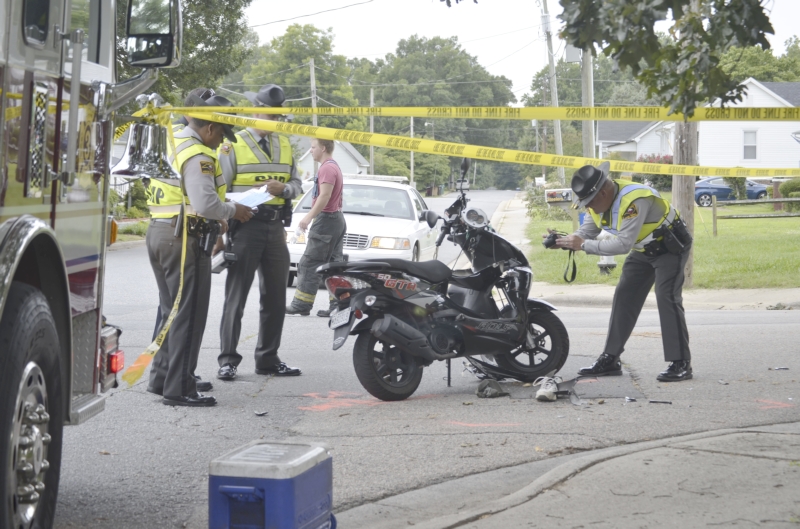 State troopers take pictures and go over details with Landis Police of a two-vehicle crash at the intersection of West Hoke and South Zion streets in Landis. The rider of the moped collided with a Toyota Avalon, not shown, and was thrown. He was pinned underneath the vehicle and was freed by Landis and China Grove Fire Departments. Shavonne Walker/Salisbury Post

LANDIS — A Landis man was killed Sunday after he was struck by a vehicle and thrown from his mo-ped at the intersection of West Hoke and South Zion streets, just a few blocks from the Landis Fire Department. The man was pinned underneath the car.

Earl Michael McCraven, 55, was riding a GTA 50 mo-ped and died at the scene. The driver, Eva Marie Gainey, 22, also of Landis, was driving a Toyota Avalon. Police say she stopped at the stop sign and proceeded through the intersection. It appears Gainey did not see McCraven. The two vehicles collided in the intersection, throwing McCraven from the mo-ped.

Landis and China Grove Fire departments arrived quickly and used air bags to lift the car about two feet so that emergency personnel could free McCraven from underneath the car, said Landis Battalion Chief Stephen Overcash.

Overcash said the man was free in under five minutes. Overcash said he had a faint pulse, but shortly thereafter EMS confirmed he was deceased.

Speed is not believed to be a factor and neither is impairment. Police Capt. Roger Hosey said as per protocol officers did draw blood from Gainey to test whether she was under the influence of any impairing substances.

“There’s no suspicion that she was under the influence,” Hosey said.

Gainey is not being charged at this time. The investigation is ongoing and police will consult with the Rowan District Attorney regarding the case. Landis Police investigated the crash and were assisted by China Grove Police and the State Highway Patrol.

Officers and troopers worked to gather information from Gainey and other witnesses at the scene. The collision occurred in a residential neighborhood. Many of the neighbors sat on their front porches and stood in their driveways while troopers and police took pictures of the scene.

Gainey was taken to Carolinas Medical Center NorthEast complaining of back and neck pain.