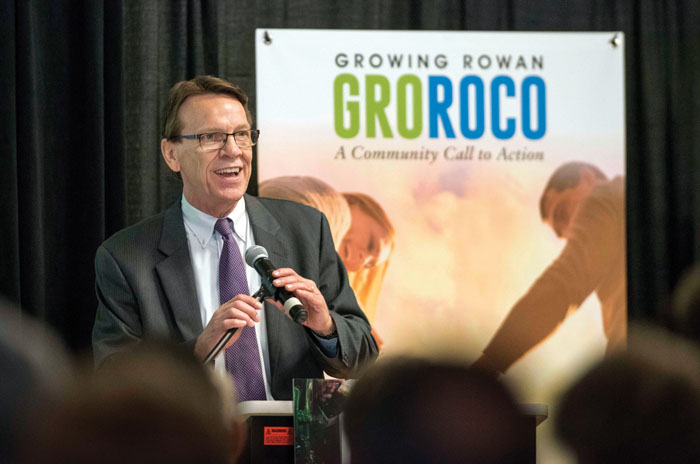 What might attract someone to relocate to Rowan County?

Ask Rod Crider, the new head of RowanWorks economic development. Crider moved here recently from Wayne County, Ohio, and the factors that drew him could be good motivators for other people — perhaps even new industry — to choose Rowan.

Crider shared his story during  Friday’s Growing Rowan meeting at West End Plaza. Before accepting the Rowan job, he was “sitting pretty good,” as he put it. The agency he’d been leading for  years was one of the top economic development organizations in the country.

He saw something in Rowan County that longtime residents might miss as we go about our business day-to-day — opportunity and potential.

The Charlotte region is one of the fastest-growing regions in the country, and North Carolina has risen to the ninth most-populous state. With more people comes more opportunity, and Rowan itself might be “sitting pretty” in regards to location. Proximity to Charlotte is one of the things that differentiates Rowan from a lot of other good, solid communities that are looking for growth. Look at North Wilkesboro, Surry County and Burke. Far removed from a metro area, they’re going to struggle even more to as the tide of growth is drawn to metro areas and the counties around them.

We’ve all seen the growth of Charlotte-Mecklenburg spill over into the adjacent counties of Cabarrus and Iredell. Rowan is just a few more miles up the road. Already 2.5 million people are within a 60-minute drive. Growth is coming our way, Crider said.

He also saw a commitment to change when he looked at Rowan County. There’s been some shakeup in elected officials, and several key organizations have relatively new leaders — the school system, the Chamber of Commerce and others. They all share a commitment to move the community forward, he found.

Leadership was a big factor for Crider, too. Between the mayor, county commission chairman, city and county manager and others, he saw leaders who collectively have a lot of experience and have cultivated a culture of collaboration.

It’s easy to see Crider fitting in here, getting along with the leadership group but set apart by the extra expertise and perspective he brings to the conversation. For that he gets instant respect.

Sometimes it helps to have someone remind us of important principles.

“Where there is no vision, the people perish,” Crider quoted Proverbs. Our imagination determines our destiny, he said, and all memorable achievements are brought about by people with vision. He gave the example of Amazon founder Jeff Bezos, who expanded what was essentially a mail-order book business into a retailer  bigger than Walmart. Recently Bezos bought Whole Foods, bringing his retail acumen to the world of bricks-and-mortar.

Without vision, communities lose their vitality, Crider said, and offered the city where he grew up, Detroit, as an example. Known for the loss of automotive jobs and the city’s financial crisis, Detroit has turned a corner and is becoming known as a model for urban revitalization.

Salisbury-Rowan is no Detroit, Mich., but this area has a lot in common with Wooster, Ohio, from whence Crider came. Within 45 minutes of a metro area — Charlotte for us, Cleveland for Wooster — ag-urban communities offer residents the best of both worlds.

When the Daily Record in Wooster reported on Crider’s departure,  the chairman of his Wooster board, John Crum, said that during Crider’s tenure the area experienced business growth and saw its economic development council  built into a professional and effective organization. “We had all of the right raw material, great location, work force, cooperation in both the nonprofit and for-profit sector, and Rod was able to package that together to gain visibility in the economic development world.”