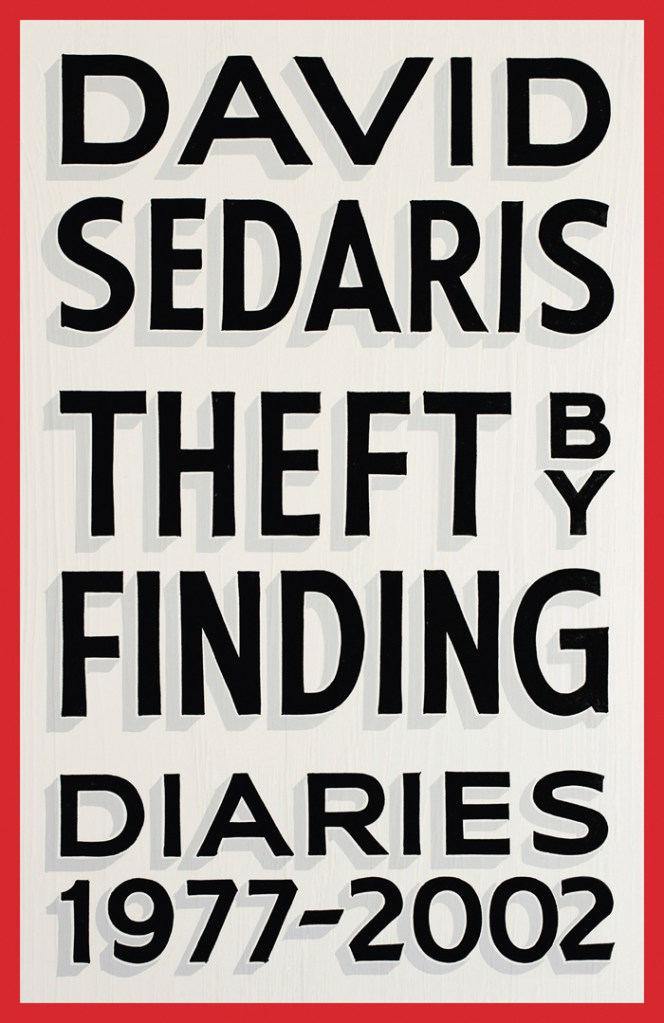 David Sedaris has spent decades mining his life for nuggets he can polish and sell: the time he was a department store elf, going to the dentist in Paris, his time in a nudist trailer park. His essays tend to meander over a true-ish story from his life, with characters a bit more eccentric than the people you tend to meet in your life, like the taxidermist with the mummified human arm or his neighbor who dyed her teenage daughter’s hair gray in order to keep being the pretty one.

To a true Sedarist many of the essays in his new book – a collection of his diary entries over 25 years called “Theft by Finding” – might seem familiar. But what’s new here is the lack of polish, at least in the early Sedaris. Here we see 1977 Sedaris, slowly morphing from a transient fruit picker thinking about becoming a sculptor to someone whose diaries will sell for $28 a pop. Reading the book is like a very long class in becoming an essayist. Sedaris learns the voice that will make him a star.

Because of the diary format, a careful reader can identify the precise day it happens: Oct. 2, 1986. Page 145.

Sedaris is 29 and a student at the Art Institute of Chicago. He’s taking writing classes along with visual arts courses and hasn’t expressed interest yet in becoming a writer. It’s 40 pages or so before he sells his first story for $15 to New American Writing.

He has discovered he says, a list from Adult Children of Alcoholics, “telltale attitudes” that describe themselves and their “hidden anger.”

“We feel isolated, different from other people,” is one. “We judge ourselves harshly” is another. “We focus on others rather than looking honestly at ourselves.” “We live from the viewpoint of victims.”

The reader of this diary who isn’t David Sedaris has not, at this point, been told if Sedaris is in fact an adult child of alcoholics. He has already complained that the list applies to just about everyone. This entry might just be about an interesting found object. It might not just be about that at all. Sedaris knows. The other reader does not. So here’s how he ends the entry:

“Is seven out of eight bad?”

That coyness, that withheld information, that possibly meaningful kicker is the first sign of the writer that Sedaris will grow up to be.

Suddenly the diary is being written for an outside audience, the one who doesn’t know what isn’t said. The value added here is witnessing a writer’s craft congealing. You start with the raw material and you watch Sedaris learn how to use it.

Four years and three weeks later, he’ll get an interview for the elf job.

Sedaris will be at Ovens Auditorium in Charlotte Oct. 21, 8 p.m. Tickets start at $75 at http://ovens.auditoriumcharlotte.com/events