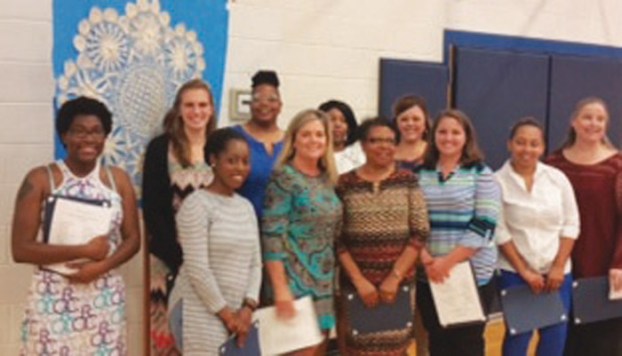 The May Friendship Celebration of the Church Women United was held at the J.F. Hurley YMCA on May 5 for a luncheon meeting. President Dorothy Gill-Smith, Moore’s Chapel AME Zion, presided. Chair Vickie Kotlarz welcomed more than 130 women and men from nine different denominations.

The theme for the program was “Kindling Ladies attached New Fires of Love” based on scriptures Luke 12:49 and Matthew 18:1-14.

The Fellowship of the Least Coin offering was received. This is a worldwide ecumenical movement of peace and reconciliation. Through this movement, Christian women around the world meet and pray with each other and are reminded to live a reconciling and forgiving life with others. Each time a woman prays for justice, peace and reconciliation, she sets aside one “least coin” as a tangible token toward her prayer being answered.

The hands on mission project for the celebration was directed by Ecumenical Action chair Mary Marlin. Items for the Good Shepard Clinic were collected. Jean Allen, director of the Clinic, received the gifts and reported on the work of the clinic.

Another focus of the May Friendship Celebration is to recognize young church women. Since 2002 this recognition has become a way to involve younger women and promote inter-generational dialogue. Church Women United feels the need to recognize and affirm our younger sisters in Christ who are working in many different vineyards of church, school, community and business. The following young women were recognized:

The next Salisbury-Rowan Church Women United Celebration will be the Human Rights Celebration on Friday, Aug. 4, 7 p.m. at Moore’s Chapel AME Zion Church, 500 Partee St. The hands on project will be school supplies for Communities in Schools.

Altrusa International of Salisbury Inc. hosted the Altrusa International District Three Inc. Conference at the Marriott Twin City Quarter Hotel in Winston-Salem May 4- 6. The Conference theme was “100th Anniversary Celebration.” Altrusa International was organized on April 11, 1917 in Nashville, Tenn. The Salisbury club was chartered May 14, 1936. The clubs are comprised of professional men and women whose main emphasis is literacy and service to their communities. The 26 District Three Altrusa Clubs are from North Carolina, South Carolina, Georgia and Florida. Sponsors for the District Conference included Cheerwine and Our State Magazine. The Conference service project supported The Village Rally in Salisbury.

Some of the Salisbury Altrusa club’s recent projects include local scholarships, a literacy fair and book give away, Salisbury Housing Authority Village Rally, and reading to children at Head Start schools.

Altrusa International of Salisbury  meets the first Thursday at 6  p.m. from September to June at Trinity Oaks.

Earl Gray introduced guest speaker for the evening, Maureen Collins.  Maureen owns The White Azalea.  Her showroom is in the Black Lion on Park Road in Charlotte.  Maureen lived in Brooklyn, New York for 11 years in and studied art all her life.  She took private oil painting lessons and with her artistic abilities, she developed a love of gardening.  After working for an accounting firm for 38 years, retirement brought her to do something she really wanted to do.

She began teaching oil painting and decorating homes.  While teaching, decorating and gardening. Maureen decided to try her hand at building a fairy garden.  With the eye of an artist, she brought the supplies and built an incredible fairy garden right before our eyes.  She taught us to fill the container to the very top with dirt, and the key to having it look “enchanting” was to build and hide things. You must find the focal point of the pot, have some height for the eye to follow up and around. Her hands worked like magic as she used gravel from the Philippines to make a path to the miniature fairy house, sat rubber boots by the front door, plants of English ivy and thyme, covered areas of the dirt with moss, hung a lantern along the path, added a squirrel, small flowers, a fairy wrought iron fence and a raccoon. When finished it was beautiful and intriguing to study and find all the details. The completed fairy garden would retail for $120.  Some gardens get gnats and Maureen suggested mixing 1 tablespoon apple cider vinegar with 2 cups of water and spraying the garden.  Maureen graciously gave us the Fairy Garden as a door prize for the evening and new member Cathy Wilson won the prize.

Refreshments were hosted by Vicki Graham, Kathleen Tilgham, and Earl and Shirley Gray.

Tim Downing will be the speaker for the June meeting and the program will be on sustainable gardening.  Anyone interested in gardening is invited to the June 26 meeting at 7 p.m.

DENTON — –The 47th Annual Southeast Old Threshers’ Reunion, the largest steam, gas-engine and antique farm show in the Southeastern U.S., will take place June 30-July 4 at Denton FarmPark. Along with historic demonstrations of threshing —from horse-drawn to steam —  and gas-powered machinery, hundreds of antique tractors, cars and engines will be on display.

The festival began as a celebration of threshing, the process of separating edible grain from the inedible chaff that surrounds it. In recent years, the reunion has expanded to include more than 1,000 antique tractors, including the “Allis’s of the East” collection of tractors dating from 1914-1985. Other activities include wood sawing demonstrations, border collie herding, crafts, tractor-pull and pedal-pull contests for all ages, live music and kids’ activities. A new addition this year is the personal collection of Coca Cola memorabilia by Keith Loflin.

Centuries ago, threshing was done by hand, a very laborious process referred to in the Bible. Several different horse-powered threshing methods followed until steam- and gas-powered machines — and finally, the automated combine — were invented. All methods will be demonstrated at various times throughout each day of the reunion.

Before the official event begins, the Sixth Annual Tractor Ride will take place on June 29 at 9 a.m. Those who wish to ride can register the morning of the event between 8-8:30 a.m. Registration fees will benefit Baby Bundles of Fort Bragg.

Denton FarmPark is a family-owned historical park. A full-size steam train encompasses the park on a 1 ½ mile track.

Denton is about 40 minutes from Salisbury.

Home again The next best thing about traveling is coming home. Ireland was wonderful but we’re glad to be back.... read more