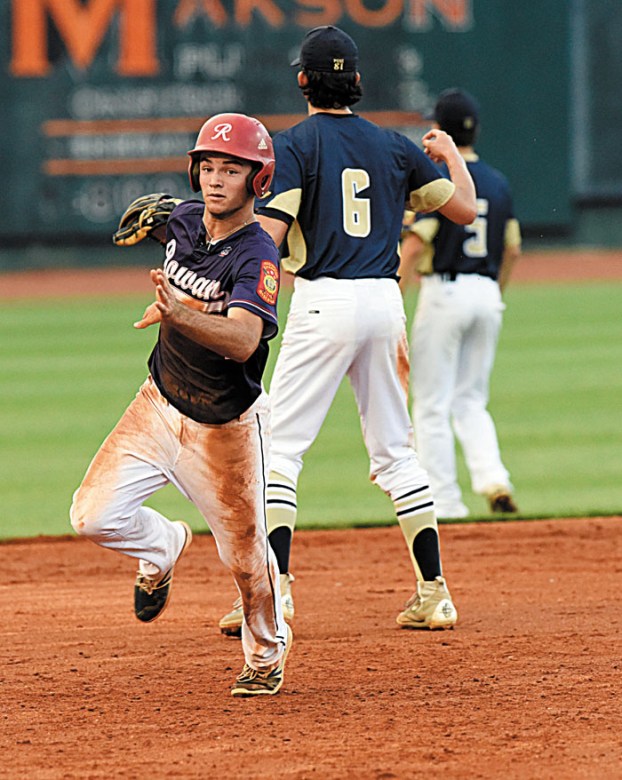 Wayne Hinshaw/for the Salisbury Post ... Rowan’s Chandler Blackwelder, shown rounding second base during an earlier game this season, went 5-for-5 Friday night as his team pounded Kannapolis, 18-8, at Newman Park. Rowan is now 18-0 this season. The Southern Division leaders stretched their winning streak to 18 games Friday night when they hammered visiting Kannapolis, 18-8, in eight innings.

“We’re a back-inning team,” winning pitcher Will Brown said after Rowan collected 21 hits, erased a five-run deficit and improved to 5-0 in division play. “Even though we were down in the first few innings, I knew we weren’t going to give up. Nobody wants to give up.”

He’s right. Post 342 is starting to resemble an old-time carnival fighter — taking on all comers and daring opponents to take a swing. It played this game with quiet insouciance, landing prominent blows until Kannapolis threw up its arms and surrendered.

“Rowan’s a very solid baseball team,” coach Joe Hubbard said after Post 115’s barren season continued. “We’ve played them four times and given up a ton of runs. They run and force the issue as well as any team I’ve ever seen. You feel pressured to make perfect plays.”

Kannapolis (0-10, 0-5) was far from perfect, but did build an 8-3, fourth-inning lead against Rowan starter Olen Stamper. The right-hander allowed eight hits — including Joe Tolone’s two-out home run in the third and doubles to Jacob Tuttle and Casey Richie — before Brown relieved with one out in the fourth.

“The offense has carried us the last couple games,” said Rowan coach Jim Gantt. “Middle relief has been good. (Thursday) night it was Joe Harrison and tonight Will Brown. He settled in and stopped them from scoring. That was key.”

Brown won his second game by yielding just one run in 3 2/3 innings of relief. He allowed four hits and struck out three.

“Innings like that are really fun,” said Blackwelder, who went 5-for-5 and reached base six times as Rowan’s leadoff batter. “I go through spells where I’m not making good contact, but I’m seeing the ball really well right now. On the home run, the pitch was low and inside. I didn’t really get under it, but I got it, and in this park you never know.”

Outfielder Henderson Lentz went 3-for-4, reached base five times, stole a base and was nailed trying to score from second on a fourth-inning passed ball.

“It’s the domino effect with us,” he said. “We’re silent for a while — one run in one inning, two runs in another — then break out for seven. Coach Gantt tells us not to be scared, to be aggressive and play the game the way it’s meant to be played.”

The game ended in the Rowan eighth when John Owen legged out an infield hit and took second on a low throw, advanced to third on Chandler Lippard’s groundout and scored when Trevor Atwood hoisted a sacrifice fly to shallow right field.

“There’s no such thing as a comfortable lead in Legion ball,” he said. “We scored eight runs, which should be enough to win most games. We just couldn’t stop them.”

NOTES: Blackwelder, who bashed one of three Rowan homers Thursday night against Mocksville, has three round-trippers this season. The team has eight. … First-baseman Walton suffered a mild hamstring injury stretching for a ball on RC’s inning-ending double play in the fourth. He later crunched a line-drive single off the left-field wall and was replaced by Lippard. … Former South Rowan favorite Tristan “Shaggy” Wyatt had two hits and an RBI for Kannapolis. … Rowan plays a double header in Florence, SC today before returning to Newman Park for games on Sunday, Monday and Tuesday.