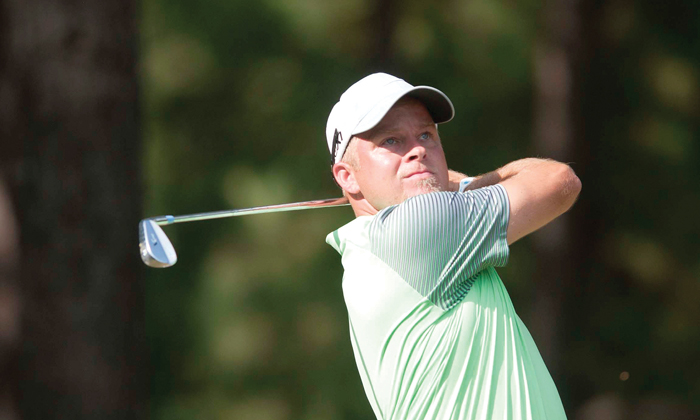 The 22-year old defending Rowan Masters champion finds himself back in the semifinals after breezing to a couple of unfettered victories Saturday at the Warrior Golf Club.

“I’d really like to win this again,” Purcell said after finishing his quarterfinal round some 90 minutes before dehydrated co-survivors Andrew Morgan, Keith Dorsett and Sean Kramer. “It’s cool coming back as the defending champion. That’s something I haven’t gotten to do many times, so I guess I’m right where I want to be.”

Purcell — the recipient of a Communications degree from USC-Upstate last month — is there because he stayed out of harm’s way. Even a 35-minute rain delay couldn’t dampen his performance in a second-round win against Richard Cobb (3 & 2) and quarterfinal decision over 24th-seeded Patrick Gregg (6 & 4).

“Last year, I was just happy to be here,” Purcell said. “I didn’t know what to expect. I’d never made it past the second round.”

He flew around the picturesque course in his afternoon match with Gregg, carding five birdies, no bogeys and completing 14 holes at 5-under par. “It was a good match on the front nine,” he said. “But if you’re making birdies, (your opponent) has to make birdies to stay tied.

Purcell took the lead for good on the par-4 seventh hole, when he sank a 30-footer for par. He also parred No. 10 to go 2-up, then sealed the deal by making birdies on 11, 12 and 13. It earned him a berth in this morning’s semifinals against Kramer, a 32-year old, participating in the Masters for the 15th time.

“I’ve never missed it since it started (in 2003),” said Kramer, the 12th seed who needed 41 holes to edge Josh Brincefield (1 up/19 holes) in the morning round and South Rowan High School classmate Ryan Burke (1 up/22 holes) in the quarters. “Yeah, it’s a little more laid back when you go against an old friend, but it still had that competitive vibe to it.”

Kramer rallied from three holes down after nine to beat Brincefield, who missed a six-foot putt for par on the first extra hole. Burke, seeded 13th, erased a two-hole deficit with two to play when he birdied the 17th and 18th, before Kramer prevailed on the 22nd.

“I hit a good drive on four,” he said. “And then played it conservatively. I hit it on the green, two-putted for par and Burke hit a bogey.”

The other semifinal pits a couple of seasoned vets who know their way around the course. Sixth-seeded Dorsett is a seven-time Rowan Masters champion who last won in 2012. At 38, he’s looking to ornament the tourney’s history. Morgan, a 2003 South Rowan grad seeded No. 10, makes his first Sunday appearance when he tees off at 8 a.m.

“This is tough,” Morgan exhaled after dispatching Jordan Taylor (4 & 3) in Round 2 and Pfeiffer-bound redhead Parker Chavis (1 up) in the quarterfinals. “I give Keith props. To win this seven times like he has is impressive — and really hard.”

Morgan had two birdies and two bogeys against Chavis, who had a two-hole lead after 12 before the rain delay. “I got a break, got rested up and went back out there and played better,” he said. “This was actually my worst round. I’m getting old, getting tired. You play 36 holes (in a day) and you get sloppy. I was sitting in the cart thinking I needed to go home and take a nap.”

Granted a reset by Mother Nature, Morgan emerged by winning the par-5 13th hole with a birdie, then captured 15 and 16 with pars. “Chavis) was on a roll and I was struggling,” Morgan said while sipping a post-round beverage. “The rain delay kind of slowed him down and helped me out.”

“I made it to Sunday morning two years ago,” he said. “It shows me that golf around here keeps getting better and better, even if it’s getting harder to win. That’s good for the county, but at my age, playing the kids, I’m fighting fatigue. They’re used to this.”

Dorsett reached the semis by outlasting 11th-seed Matt Swaringen 2 & 1 in the second round and 14th-seed William Little (1 up/19 holes) in the quarters. “It was basically two grueling matches,” he conceded. “I earned my way by making more birdies and eagles than my opponents.”

Against Swaringen, Dorsett sank three birdies and two eagles to build a three-hole lead with three to go. Both golfers birdied the 17th and final hole.

Little was a hole up on Dorsett through 12 when the skies opened up — and still ahead by a hole after 15. Dorsett squared the match at 16, where he chipped within 15 feet of the cup and won with a par. On the decisive 19th, Little’s third shot sailed 10 yards past the pin while Dorsett’s settled on the doorstep.

“I had two putts to win the match,” he said after draining a four-footer. “But I wanted to go ahead and make the first. That way I won it on my own.”