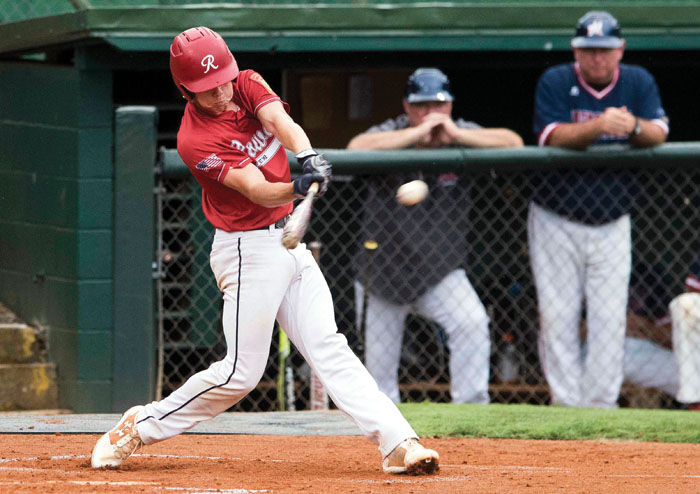 SALISBURY — The Rowan American Legion team sandwiched an ugly start and a nearly ugly ending around a powerful display of hitting last night, preserving its thus-far perfect season at 17-0.

Post 342 pounded out 18 hits, including three home runs, to roll past Mocksville-Davie Post 54, 17-7, in a contest shortened to 7 innings — by the mercy rule. Rowan improved t0 4-0 in the Southern Division of Area 3 despite committing three errors and falling behind, 2-0, right out of the gate.

“That is kind of how it has been all season, playing from behind,” stated veteran right fielder Lee Poteat after posting a stellar 4-for-5 night at the plate with two RBI and a double. “Luckily we battled back to get ahead, then scored those seven runs in the third inning for a cushion.”

The third-inning outburst did stake Rowan to 10-2 lead, thanks to doubles by Poteat, Chandler Blackwelder and Brandon Walton, plus a standup triple by Brett Graham. But it was a wild-and-wooly seventh inning that saw the two teams combine for 10 runs, six hits, three errors and a walk-off wild pitch.

First Mocksville (7-9, 2-3) avoided the mercy rule in the top of the seventh, trailing 12-2. Post 54 jumped on Hayden Setzer for 5 runs (4 unearned) on two hits and three walks. An RBI-single by Henry Stone, then a two-run throwing error by Rowan not only extended the game, but made it an uncomfortably close, 12-7 score.

But as they have done so many times this season, Rowan had an emphatic answer with five runs of their own to end the game, thanks in large part to a clutch three-run homer by third baseman John Owen that made it 15-7.

“I decided beforehand that if he gave me a pitch to hammer I was going to do what I could with it,” Owen said. “Luckily, I got a pitch I could hit over the F&M sign in left.”

The big blow continued a remarkable hot streak for the East Rowan graduate, since he took over the third base job eight games ago. Last night, Owen was 3-for-6 with six RBI and has now driven in 18 in those eight games, while batting close to .350.

The game ended four batters later, as a Graham RBI-single made it 16-7, then Brycen Holshouser scrambled home on a wild pitch to close it out by the 10-run-rule.

Rowan head coach Jim Gantt was somewhat amazed that his team made three errors and issued a walk in the first inning, but still managed to be ahead, 3-2, when the inning ended. “People have talked about how things have gone this season with things like that, ” he said. “but we are fortunate to have a pretty good offense at times. Our pitching is good at times, but not tonight.”

Rowan pitching did only allow five hits to the visitors from Mocksville but starter Brandon White lasted just two innings after issuing three walks and being victimized by the errors. While Setzer had trouble closing out the game in the seventh, Noah Gonzalez came on to record a pair of strikeouts to end the frame.

The real pitching star for Rowan was lefty Joe Harrison of North Rowan, who came on in middle relief in the third and posted four shutout innings of two-hit baseball. The effort earned the win  for Harrison as he improved to 3-0.

Post 342 will be back home tonight at Newman Park against Kannapolis in another division contest.

NOTES: In addition to Owen’s clutch three-run homer, Rowan got long balls from Chandler Blackwelder in the fifth and from first baseman Brandon Walton in the fourth. Walton’s blast earned everyone in the Park a free hot dog from the Hot Dog Shack in Granite Quarry. “That is the second time I have done that this season,” Walton said with a grin. “The last time it was a double off the wall. Tonight, I don’t usually get good 3-1 pitches but he (Highman) threw it right where I like it.” Rowan posted a total of 7 extra-base hits for the game.