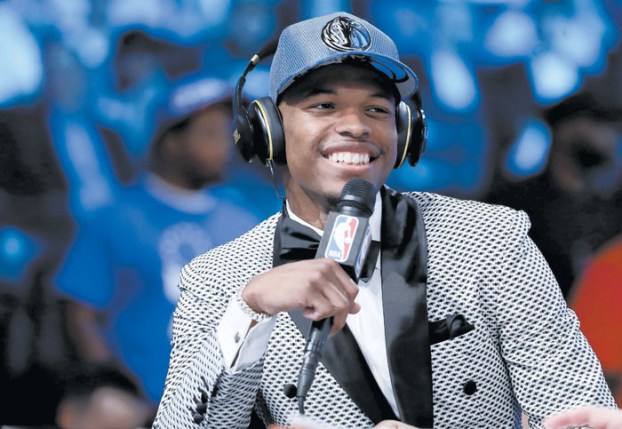 Dennis Smith Jr. answers questions during an interview after being selected by the Dallas Mavericks as the ninth pick overall during the NBA basketball draft, Thursday, June 22, 2017, in New York. (AP Photo/Frank Franklin II)

By SCHUYLER DIXON, AP Sports Writer
DALLAS (AP) — North Carolina State freshman point guard Dennis Smith Jr. was still available when the Dallas Mavericks came up at No. 9 in the NBA draft — the same spot that led them to Dirk Nowitzki nearly 20 years ago.
Coach Rick Carlisle described “thunderous” applause in the Dallas draft room Thursday night. President of basketball operations Donnie Nelson may have lost count of the chest bumps.
“This is the guy that we were after,” said Nelson, who said before the draft that point guard was the team’s biggest need. “And if we would have drafted a lot higher, he was the guy that we had circled.”
Carlisle projected Smith as a starter, with the obvious caveat that the job won’t be handed to the 19-year-old who left the Wolfpack after his freshman season, barely a year removed from tearing a knee ligament as a high school senior.
If Smith does start, he’ll be the rare case of a draft pick to do so in Dallas. Nowitzki did it for about half the season in 1998-99, after the Mavericks used the sixth pick to get Robert Traylor for Milwaukee and had the Bucks take the 7-foot German with the ninth choice. That’s the last time Dallas entered the draft with a top 10 pick.
The addition of Smith means four of the five starting spots are filled, because if he doesn’t start, he’ll likely be behind Yogi Ferrell. The former Indiana guard had a dazzling debut in Dallas that earned the undrafted rookie earned a two-year deal after joining the team on a 10-day contract.
But the Mavericks believe Ferrell is a better fit as a backup, with veterans J.J. Barea and Devin Harris also available to play point. The other three starters under contract are Nowitzki, shooting guard Wesley Matthews and forward Harrison Barnes.
Dallas is likely to match offers for center Nerlens Noel, a restricted free agent. The Mavericks acquired him at the trading deadline last season when they were retooling the roster to get younger after a woeful start led to a 33-49 finish. It was just the second time in the past 17 seasons that Dallas has missed the playoffs.
“This is a historic night for us,” Carlisle said. “Playmaking is an especially important part of the NBA game now, that having guys like Dennis Smith Jr. that can create simply on their own, and on pick and rolls, pick and rolls with Dirk, is a great blessing for us to have.”
Smith enrolled early at NC State in January 2016 after the high school injury so he could play as a freshman. He’s the only Atlantic Coast Conference player to record two triple-doubles in the same season, and he averaged 18.1 points per game. Smith led ACC freshmen in scoring, assists and steals.
His only season with the Wolfpack was challenging because of the in-season announcement that coach Mark Gottfried wouldn’t return as the team struggled to a 15-17 finish. Nelson figures that’s part of the reason Smith was still around when it was the Mavs’ turn.
“I can use it as fuel to the fire,” said Smith, who set NC State’s freshman scoring record and was the school’s first top 10 pick since Tom Gugliotta went sixth to Washington in 1992. “I’ve been underrated my whole life. That’s perfectly line with me. I’m accustomed to it.”
Carlisle said the Mavericks didn’t bring in Smith for an individual workout because they didn’t think he would be available. The club recently sent a couple of representatives to his pro day in Raleigh, North Carolina, and Smith had a video phone conversation with Nelson, Carlisle and former Dallas guard Michael Finley, now a member of the front office.
“This is one we had to get right and one what we had to get lucky with,” Nelson said. “We feel both of those things kind of fell in place. You don’t want to get too excited about players, but he’s got all the right stuff.”
___
More AP NBA: https://apnews.com/tag/NBAbasketball