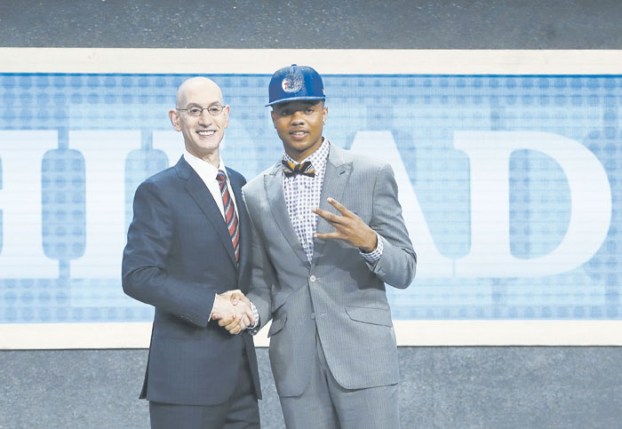 Washington's Markelle Fultz, right, poses for a photo with NBA Commissioner Adam Silver after being selected by the Philadelphia 76ers as the No. 1 pick overall during the NBA basketball draft, Thursday, June 22, 2017, in New York. (AP Photo/Frank Franklin II)

CAMDEN, N.J. (AP) — The Philadelphia 76ers have put The Process in the hands of Washington guard Markelle Fultz.

Fultz, the 6-foot-4 guard, was selected No. 1 overall in the NBA draft Thursday night and joined former LSU guard Ben Simmons as consecutive top picks for the Sixers.

Widely reviled and also admired, the Sixers’ plan to go from worst-to-first by openly stripping the roster bare of talent to lose and gobble draft picks has resulted in Joel Embiid, Simmons and now Fultz.

Embiid and Dario Saric will finish in the top three when rookie of the year results get announced on June 26, and Simmons is expected to be ready for next season after recovering from foot surgery.

Embiid welcomed Fultz to Philly with a tweet — what else ? — where he proclaimed the new nickname was FEDS : Fultz, Embiid, Dario, Simmons.

“He used to tweet and retweet my stuff,” Fultz said. “Once he figured out I had a chance to go there, he started showing more love and everything like that.”

Fultz averaged 23.2 points, 5.7 rebounds and 5.9 assists in 25 games during his lone college season at Washington , excelling on a team that finished 9-22 and lost its final 13 games. Fultz led the Pac-12 in scoring, finished No. 6 among all Division I players, and was the top freshman scorer in the country.

Could it be that Fultz’s arrival mean The Process is finished?

“We’re going to try to make the right decisions to finish this project,” Colangelo said.

The Lakers selected Ball with the second overall pick in the NBA draft Thursday night, eagerly accepting the potential risks and enormous rewards surrounding the sublime UCLA playmaker with an attention-grabbing father.

“This is crazy,” Ball said in a phone interview. “You can’t really tell by my emotions, but I feel good. I’m happy to be home.”

After the worst four-year stretch in franchise history, the 16-time NBA champion Lakers are rebuilding with the point guard who led the nation with 7.7 assists per game last season a few miles up the 405 freeway with the Bruins. With preternatural court vision, a solid scoring touch and a desire to become a leader, the Los Angeles-area native had everything that his favorite team’s top brass wanted.

“Guys are going to naturally gravitate towards someone who wants to make them better,” Lakers coach Luke Walton said. “To me, he’s the type of player that, when he’s on the floor, all four guys that are out there with him become better instantly. And that’s a quality and a trait that not many people have. The great ones all have it, and we hope that by the way he plays, everyone else on our team becomes better.”

The Lakers also don’t appear worried about attaching themselves to LaVar Ball, the voluble family patriarch with aspirations of building a global sports empire around his three talented sons, one $495 pair of sneakers at a time.

LaVar Ball has vowed that oldest son Lonzo would end up with the Lakers for two years, claiming he could speak his dream into existence. Moments after it became a reality at the draft in New York, LaVar pulled on a purple-and-gold hat featuring the logo of his Big Baller Brand company — and then declared Lonzo will lead the Lakers back to the playoffs next season as a rookie.

“I’m a very optimistic person, but I don’t look that far into the future,” Walton replied. “Right now, I’m hoping (Lonzo) leads us to a couple of summer league victories, and we’ll take it from there.”

Lonzo Ball didn’t blink at his father’s latest pronouncement: “You don’t play to lose, so that’s definitely the goal. … I think they have enough talent. The right people are in charge.”

Lonzo Ball usually grins or sighs when his father gets on the microphone, but he openly acknowledged he also wanted to land with the Lakers, who needed a fortunate showing in the draft lottery just to end up with the second pick. After that bit of serendipity, the Lakers made their plans for Ball well-known earlier this week when they agreed to trade point guard D’Angelo Russell to the Brooklyn Nets.

When asked if his father might tone it down now that the family dream has been spoken into reality, Ball laughed.

Walton gets it: After all, he is the son of Hall of Famer Bill Walton, the genial basketball blowhard.

“That will make it more challenging a little bit, but I think that every top draft pick that comes in has a target on their back,” Walton said. “The best players in this league want to set the tone with these young players early, to let them know what it’s like here. I know when I was a young player, I had a target on my back from my own teammates because of things my dad said, but it ended up working out.

“What’s incredible is that according to Zo, his dad has been great. He’s always been there for him. He has supported him. He obviously loves him, and that’s what you want out of a father, so I’m not overly concerned with that.”

LaVar Ball raised his family in Chino Hills, a Los Angeles suburb 35 miles east of Staples Center. Lonzo Ball has never attended a Lakers home game, but he rooted for Kobe Bryant on television and modeled his game after Magic Johnson, who took over the Lakers’ basketball operations in February.

Ball receives comparisons to Jason Kidd for his offensive abilities. His cool playmaking turned UCLA into the highest-scoring team in Division I, and he scored 14.6 points per game despite an unorthodox shot.

Ball was named the Pac-12’s freshman of the year, beating out No. 1 pick Markelle Fultz from Washington. He was the conference’s first player to average 14 points, six rebounds and seven assists per game since Kidd did it at California.

“I’m sure he’ll fit into our culture,” Walton said. “He’ll help improve our culture with the way he plays, the way he passes, his selfless nature, and that’s why we took him.”

The Sixers kept the project rolling later in the first round, striking a deal with Orlando to acquire the 25th pick, center Anzejs Pasecniks from Latvia. The Sixers will give up a future draft pick that could be a protected first-rounder in 2020, a person with knowledge of trade told The Associated Press on condition of anonymity because the deal had not been officially announced.

Pasecniks, a 7-1 center, could be stashed overseas and continue to develop before the Sixers bring him over.

Over the past 10 seasons, only two other freshmen had a better scoring average in college: Kevin Durant for Texas in 2006-07 and Michael Beasley for Kansas State in 2007-08.

Philadelphia had the No. 1 draft spot three previous times, taking Doug Collins in 1973, Allen Iverson in 1996 and Simmons. The Sixers also hold four second-round picks (36, 39, 46, 50) on Thursday. The Sixers acquired the No. 1 pick in a deal with Boston for the third pick, plus an additional first-rounder in either 2018 or 2019.

“We’re going to keep driving to get it perfect,” Colangelo said. “It’s well on its way there.”

The Sixers went 28-54 this past season, after winning 19, 18 and 10 games in the previous three seasons, starting a rebuilding campaign more commonly known as The Process. Embiid had adopted the nickname as his own and was commonly introduced as “The Process” at home games this season.

“This city has to feel fantastic,” coach Brett Brown said.

The tease of the potential ahead has caused Sixers fans to react with their wallets: the Sixers said Wednesday they have sold a franchise-record 14,000 season ticket packages for next season. The Sixers said they expect to sell out all 41 home games next season and fans can be added to a wait-list program. Consider, four years ago, the Sixers’ season-ticket base at this time of the year was at 3,400. They sold a touch under 10,000 last season and have accepted more than 1,000 partial plan deposits just this week.

“By adding a player of Markelle’s caliber to our promising roster, we believe we’re incredibly well positioned for the future,” team owner Josh Harris said. “This is a tremendous night for the Sixers and our great fans.”

Fultz, wearing orange sneakers made of basketballs at the Barclays Center, is a natural talent on the court that moves with fluidity and ease, and his abilities and tendencies have been dissected heavily heading into Thursday’s draft. Off the court, he is exceedingly loyal to those that believe in him.

“I don’t think it’s one thing I can’t do. I think I do everything at least decent,” Fultz said.

He is also a fan of posting trick shots to social media. A lover of Chick-fil-A and his own homemade fried rice. His drive and humility comes from once being cut from the varsity of his high school team.

“You realize he’s got the chip but he doesn’t go out of his way to show it,” Colangelo said. “I think there’s an inner drive there and it’s something that makes him special. He’s motivated to prove people wrong but not in a bad way.”

By Steve Reed AP Sports Writer CHARLOTTE (AP) — Malik Monk was overwhelmed at the idea of being drafted by... read more