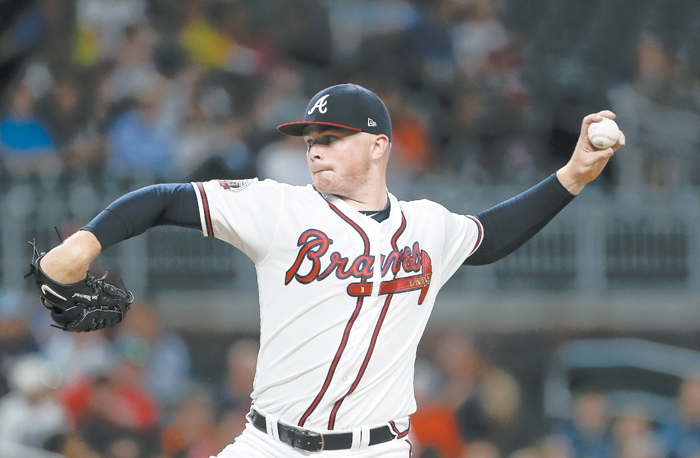 By CHARLES ODUM, AP Sports Writer
ATLANTA (AP) — Matt Kemp hit a two-run homer off Cory Gearrin in the 11th inning to lift the Atlanta Braves to a 5-3 win over the San Francisco Giants on Wednesday night.
The homer, the third of the game for Atlanta, was Kemp’s seventh game-ending shot of his career.
Gearrin (1-2) walked Nick Markakis with one out before Kemp’s homer barely cleared the right field wall..
Matt Adams hit a two-run homer and Tyler Flowers also homered off Jeff Samardzija.
Braves Sean Newcomb, who gave up one run in six innings, was denied his first win when Hunter Pence’s homer off Braves closer Jim Johnson tied the game at 3-3 in the ninth. It was Johnson’s fifth blown save in 18 chances.
Luke Jackson (2-0) pitched the 11th for the win.
The Giants, who snapped a seven-game losing streak by beating the Braves 6-3 on Tuesday night, have lost 10 of 12.
Adams has flourished in what was intended to be a fill-in role at first base while Freddie Freeman recovered from a fractured left wrist. Freeman said Wednesday he plans to play third base when healthy to keep Adams’ bat in the lineup.
Samardzija led 1-0 before Adams’ homer over the center field wall drove in Nick Markakis, who led off with a single. Adams has 11 homers in his first 117 at-bats with the Braves, and 12 overall for the season. Adams’ career high for homers was 17 with the Cardinals in 2013.
Brandon Belt’s triple into the right-field corner off Newcomb drove in Pence for a 1-0 lead in the second.
Denard Span tripled off Arodys Vizcaino with one out in the eighth and scored on Vizcaino’s wild pitch to Brandon Crawford.
Newcomb retired his final 13 batters and allowed one run on three hits in six innings.
Samardzija allowed three runs on six hits in seven innings. He had eight strikeouts
Flowers homer bounced off the top of the wall into the netting attached to the left field foul pole and bounced back to left fielder Austin Slater. A review confirmed the homer.
The start of the game was delayed 1 hour, 15 minutes by rain.
TRAINER’S ROOM
Giants: A MRI revealed inflammation in 3B Eduardo Nunez’s left hamstring. He will test the hamstring on the field on Friday in San Francisco and could land on the DL if there is no improvement. He has tried to play through hamstring discomfort most of the season and has missed four of the last five games. … LHP Madison Bumgarner (left shoulder) threw 35 pitches over two innings in his second simulated game. He is scheduled to throw three innings in a rookie league game on Sunday.
Braves: Freeman (fractured left wrist) hopes to be cleared to hit following a CT scan on Friday. Freeman took grounders at third base and said he is targeting July 14 against Arizona as his first game off the DL. He confirmed his plans to move to third base to keep 1B Matt Adams’ bat in the lineup.
TOP DRAFT PICKS SIGN
The Braves have signed their first 24 draft picks, including right-hander Kyle Wright, the No. 5 overall selection. The team also signed OF Drew Waters, the No. 41 overall pick.
UP NEXT
Giants: RHP Matt Cain (3-6, 4.99) is 4-3 with a 3.16 ERA in nine career starts against Atlanta. He was the losing pitcher despite allowing only one run in seven innings in a 2-0 loss to the Braves on May 26 in San Francisco.
Braves: LHP Jaime Garcia (2-5, 3.59) pitched 6 2/3 innings in the 2-0 win over the Giants on May 26. For his career, he is 4-1 with a 2.54 ERA against San Francisco.
___
More AP baseball: https://apnews.com/tag/MLBbaseball