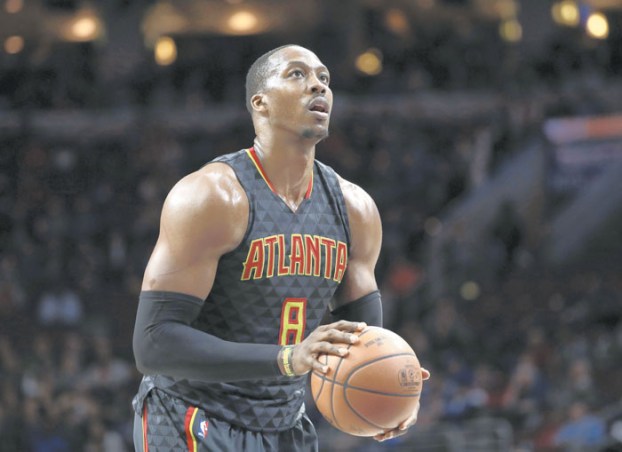 FILE - In this March 29, 2017, file photo, Atlanta Hawks' Dwight Howard prepares to shoot a free throw during the team's NBA basketball game against the Philadelphia 76ers in Philadelphia. A person familiar with the situation says the Charlotte Hornets have reached an agreement to acquire center Howard from the Hawks. The Hawks are sending Howard and the No. 31 overall pick in Thursday's NBA draft to Charlotte for center Miles Plumlee, shooting guard Marco Belinelli and the 41st pick, the person told The Associated Press on condition of anonymity Tuesday, June 20, because the trade is not yet official. (AP Photo/Matt Slocum, File)

Hornets coach happy to have new center in Dwight Howard

Clifford is familiar with Howard, having coached him for six seasons as an assistant in Orlando and Los Angeles.

“I know what he has to do to play well,” Clifford said Wednesday. “He understands that I know him. I know his game. Being around him in different settings I have a feel for what he likes to do… There is no reason he can’t get back to playing at a really high level.”

General manager Rich Cho said Clifford’s familiarity with Howard is a major reason the Hornets pulled the trigger on a trade that sent guard Marco Belinelli, center Miles Plumlee and the No. 41 overall pick in the NBA draft to the Atlanta Hawks in exchange for Howard and the No. 31 overall pick. It meant taking on Howard’s contract, which will pay him $47 million over the next two seasons.

Now the question becomes if Howard can bounce back from two tumultuous seasons in Atlanta and Houston, and also fit in in Charlotte.

Howard was an NBA All-Star eight straight seasons from 2007-14.  But Howard didn’t play in the fourth quarter two of Atlanta’s first-round playoff games last season, something that irked the 13-year NBA veteran. Atlanta dealt Howard to Charlotte just one year into a three-year, $74 million contract.

While Clifford acknowledges that the 31-year-old Howard isn’t as athletic as he once was, he said the 6-foot-11, 265-pound center will bring defensive toughness and physicality — something the Hornets woefully lacked last season while finishing 36-46.

Howard is the NBA’s leading active leader in shots blocked and rebounds.

He’s also a three-time NBA Defensive Player of the Year and has been selected to the NBA All-Defensive team five times.

“For three years when people looked on the schedule and saw we’re playing Charlotte on Wednesday it was like, ‘Oh man that’s not going to be easy,’” Clifford said. “But last year, in the last 25 games, it was easier. And we’re not going to win that way. Dwight can go a long way toward changing that back to the way it was.”

Howard was not present at the news conference Wednesday at the Hornets arena and has not commented on the trade.

However, Howard spoke with team owner Michael Jordan on Tuesday night and indicated that he was “pumped up” about joining the Hornets, Cho said.

Clifford doesn’t buy into the notion that Howard is a locker room cancer who can be a disruption to his teammates. Having coached him for six seasons, Clifford said he thinks Howard will be welcomed in Charlotte and fit in nicely.

“Listen, this is an easy guy to like,” Clifford said. “This isn’t some guy who is hard to deal with. He’s bright, he’s fun-loving and has a great sense of humor and great wit. … I think he will fit in very well.”

Howard, the No. 1 overall pick in the 2004, has averaged 17.5 points, 12.7 rebounds and 2 blocks in 954 career games played.  Howard’s 58.5 shooting percentage ranks fourth all-time in NBA history and he is coming off a season in which he made a career-high 63.3 percent of his shots.