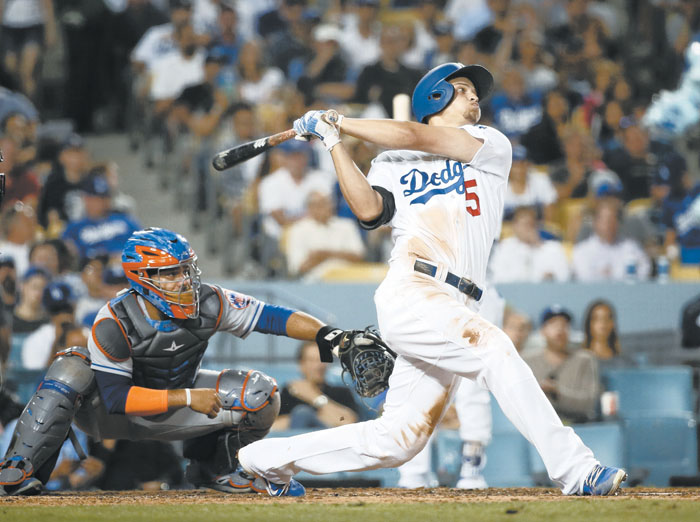 Aaron Judge revealed that he received an invitation to the All-Star Home Run Derby, then promptly went out and hit another home run. Cody Bellinger surely will get an invite, too, after becoming the first rookie to hit 10 home runs in 10 games.

Welcome to them, and welcome to a new era in baseball, where balls are flying over fences at record rates. It’s a throwback to when Barry Bonds and Mark McGwire were in their juiced prime, but hopefully for different reasons.

The why is debated, but the trend is unmistakable. Startling, almost, because only three seasons ago baseball hit a 20-year low for home runs.

At pitcher-friendly Dodger Stadium, where games for the better part of a half-century were likely to end up 1-0 or 2-1, eight home runs were hit the other night, including two by Bellinger. He came back the next night to hit another, only to be overshadowed by teammate Corey Seager, who hit three in a 12-0 win over the New York Mets.

So what’s behind the power surge? Depends on who you ask, though theories range from a tighter baseball to hitters trying to launch balls at a higher angle. Since this is baseball, there will always be some suspicion that home run hitters are getting some chemical help despite tougher testing for performance-enhancing drugs.

Even baseball lifers can’t put their finger on it.

“Maybe if you broke it down, if you get the dudes from Freakonomics to look at it, they might be able to break it down properly,” Cubs manager Joe Maddon said earlier this month.

You don’t need Freakonomics to notice more hitters are swinging from the heels than ever. It’s easy enough to see from in front of the television on any given night, as .220 hitters try to justify big contracts with three-run shots over the outfield wall.

In stat-obsessed baseball, any number of numbers can be used to quantify what’s happening. Launch angle and exit velocity are the new buzzwords, thanks to the introduction of MLB’s Statcast three years ago that measure things previously only estimated by the human eye.

Power hitters are trying to hit more flyballs, and more of them are going over fences.

Of all the power stats available, though, here’s a startling one to chew on: Dodgers ace Clayton Kershaw has let up 17 home runs in less than a half-season, more than he gave up in any full season in his previous nine years in the big leagues.

His explanation? He doesn’t really have one.

“You hope your mistakes are hit for singles or doubles,” Kershaw said. “It just so happens mine are going out of the ballpark right now. I don’t know what you do to change that, other than stop making mistakes”

Kershaw is not alone in feeling the pain. Around the league, pitchers are struggling to keep the ball inside the park any way they can.

Six players have hit three home runs in a game already, and we haven’t even reached the All-Star break. In Cincinnati earlier this month, a 5-foot-10 journeyman named Scooter Gennett — who entered the game with 38 home runs in five seasons — became the 17th batter in MLB history to hit four home runs in one game.

The Astros’ George Springer has already hit eight leadoff home runs this season, five short of the record set by Alfonso Soriano in 2003. And hitters are on track to break the record set just last season of 111 players hitting 20 or more homers in a season.

None of this is bad news for baseball, where the view has always been that home runs put fans in seats.

So far this season, it’s been Home Run Derby almost every day.

Tim Dahlberg is a national sports columnist for The Associated Press.