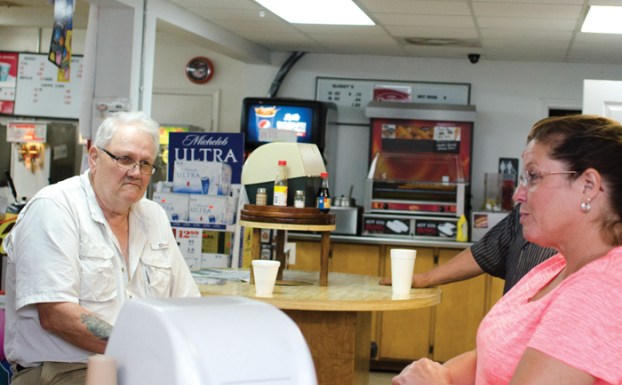 An empty seat at the round table: Friends remember Bobby Hooks, who died in a traffic collision Tuesday Bobby Gene Hooks is shown here, right, in a picture with friends and employees at M&L Mini Mart in Faith which is where he stopped most mornings. He was a regular fixture at the store. Hooks was killed Tuesday in a two-vehicle crash on Faith Road and South Jake Alexander Boulevard. Photo submitted by M&L Mini Mart

FAITH — There’s an empty stool at the round table inside Faith’s A&L Mini Mart.

Anyone who has ever shopped at the locally owned store probably knows about the pair of tables in the back of the Main Street hangout where regular or first-time customers sit for a meal.

But breakfast just wasn’t the same Wednesday morning without regular customer Bobby Gene Hooks. He was killed Tuesday in a two-vehicle crash at Faith Road and Jake Alexander Boulevard.

Hooks, 70, was driving his Ford F-150 pickup when he collided with a service truck for James River Equipment. He was thrown from the pickup. A Rowan County sheriff’s deputy who came upon the crash administered CPR until emergency personnel arrived, but Hooks died at the scene. The crash occurred about 2:20 p.m. in front of Thrivent Financial, sending both trucks in the opposite direction.

He left the store after eating breakfast and said he wanted to check on his wife, Donna, who was sick.

“He said she may need him,” Freeman said of their last conversation.

Freeman and others at the store were devastated to learn of Hooks’ death. He was more than just a customer, she said. He was a father figure to Freeman, especially after the passing of her own father, Allred Fink, who died six years ago in a collision at the same intersection.

“He never met a stranger,” Freeman said of Hooks. “He was an all-around good guy.”

Freeman’s family has a house on High Rock Lake, diagonally across from the home of Hooks and his wife. Last Saturday, Freeman wasn’t feeling well and she’d barely begun to nap when Hooks woke her with a kiss on the forehead and asked her if she were feeling better.

If there was ever a law enforcement officer or someone in the military or fire service eating at the mini-mart, it wasn’t unusual to hear Hooks whisper to the staff that he would cover that person’s meal.

Hooks would spend a couple of hours inside eating and giving the other guys a hard time.

Hooks was a Vietnam War veteran and a native of Cheraw, South Carolina, but he and Donna moved back to her hometown of Faith about eight years ago. The couple attended Faith Baptist Church, and Bobby was a member of the American Legion.

The Hookses have one child who lives in Faith, and their other children live in South Carolina and Georgia. The pair also have grandchildren.

When Hooks first started eating breakfast at the store, he told the staff he was there because he wanted to find out about the infamous round table. One of the two tables is original to the store. It’s the one where Bobby Hooks liked to sit.

“You don’t find more people like him,” said Richard Collins, a regular customer and friend.

Round table regular Gene Cable said he found out Hooks was killed Wednesday morning. Cable was late getting to the mini mart and he didn’t see Hooks’ truck. Regular customer Zane Robertson told them he’d driven upon the wreck and discovered Hooks had died at the scene.

“He will be missed,” Cable said.

Cable estimates he’s known Hooks for about a year.

“If there was any kinder heart then I don’t know where you’d find him,” Cable said.

Hooks for years worked as a supervisor and, out of habit, was usually dressed up, but he would also inevitably spill something on his shirt, Freeman said with a smile. KRISTI CRAVEN/ SALISBURY POST Cindy Freeman holds up the bib that Bobby Gene Hook would wear every morning when he would eat his omelet at A & L Mini Mart in Faith on June 21, 2017.

Zane Robertson’s wife, Anna, made Hooks a bib, which they all laughed about at first until Hooks actually began to use it.

On Wednesday morning, Freeman sat the bib on the stool that Hooks would have sat down to for breakfast.

Freeman said the store’s regulars will be lost without Hooks.

“He will be missed, especially around the round table,” Cable said.

It’s not clear if Hooks had a medical emergency, police officials said. The Salisbury Police Department continue to investigate the crash and asks that anyone who was in the area when it happened contact Master Police Officer Matt Benjamin at 704-638-5333.