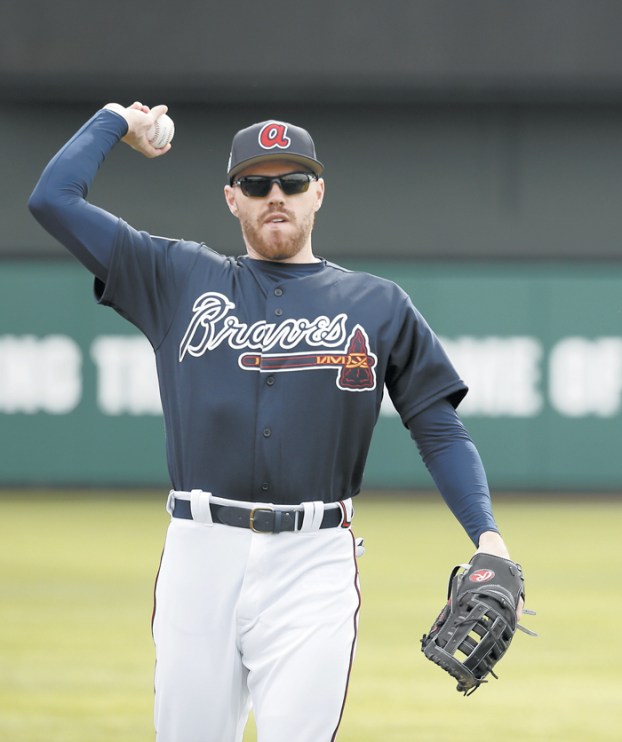 FILE - In this Tuesday, Feb. 21, 2017 file photo, Atlanta Braves first baseman Freddie Freeman warms up during a spring training baseball workout in Kissimmee, Fla. Freddie Freeman plans to move from first base to third base to keep Matt Adams’ bat in the Braves’ lineup. Freeman took grounders at third base before batting practice early Wednesday, June 21, 2017 and also made throws to first base.(AP Photo/John Raoux, File)

Braves’ Freddie Freeman ‘100 percent go’ on moving to third base

ATLANTA (AP) — Braves star Freddie Freeman plans to move from first base to third base to keep Matt Adams’ bat in the Atlanta lineup.

Freeman took grounders at third base before batting practice Wednesday and also made throws to first base.

Freeman was leading the National League with 14 homers when his left wrist was broken by a pitch from Toronto’s Aaron Loup on May 17. Freeman was expected to miss about 10 weeks. He said Wednesday he hopes to return on July 14, which would be just over eight weeks since the injury.

Despite not playing at third base since high school, Freeman says “I’m 100 percent go on it. My mindset is coming back as a third baseman.”

Freeman said he first mentioned the move to third base about two weeks ago and then began thinking more seriously about the move as Adams continued to post big numbers at first base.

Since coming to Atlanta in a trade with St. Louis on May 20, Adams is tied for third in the majors with 10 home runs. He is tied for second with 27 RBI. He has hit .296 in that time.

The combined 24 homers by Freeman and Adams are the most for any team’s first basemen.

The only other way to keep Adams’ bat in the lineup would be moving him to left field, where he played at times with St. Louis. But the Braves don’t want to remove left fielder Matt Kemp or right fielder Nick Markakis from the lineup.

“That doesn’t come around very often,” said Freeman of Adams’ production. “He’s been pretty much incredible for much of the last month. You can’t take that away and you have to look at every option to keep that bat in the lineup.”

“It says a lot about him that the best player is going to do anything he can to make this team better,” Snitker said. “I think it’s pretty cool.”

“You watch him play first base and you know it’s not like he’s this goon over there who is not athletic,” Snitker said. “His footwork, his arm is a weapon there, his hands are good. He’s an agile kid. … That’s not to say he’s going to play like Chipper but there’s no reason with his hands and arm and athleticism he can’t go over there and do a really good job.”

“I got a text last night that said ‘Seriously?’” Freeman said.

“He just told me it’s going to be tough to do, moving to third,” Freeman said. “I said I understand that. I haven’t played there in 10 years. But when you want to win, you’ll do anything to win.”

If Freeman makes a successful move, it could change the team’s long-term outlook on Adams, who might otherwise have been seen as a possible trade piece following Freeman’s return to the lineup.

“Nothing is set in stone right now but it shows the type of guy he is,” Adams said.

Freeman hopes to be cleared to hit following tests on the wrist on Friday. He plans to accompany the team on its road trip to San Diego and Oakland next week and continue to work daily with third base coach Ron Washington at third base.

“My first baseman’s glove is getting tucked away at the back of my locker and I’ve got an infielder’s glove sent to me tomorrow,” Freeman said. “My mind is 100 percent on third base.”

Hornets coach happy to have new center in Dwight Howard