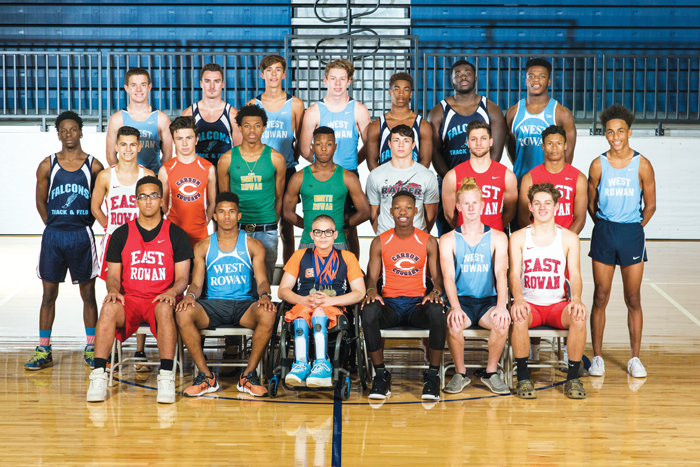 Westbrook is a long, lean, 6-foot-3 with a 36-inch vertical and a wiry body, practically exploding with energetic muscles. In other words, Westbrook can jump.

Westbrook also can run. Ask Central Cabarrus High about that. In Carson’s football game with the Vikings last fall, Westbrook, a 4.5 sprinter, had a kickoff return touchdown, followed moments later by an interception return touchdown. No one in Carson history had ever provided that sort of double trouble in the same night. As much as one person can win a football game, Westbrook won that one.

Westbrook’s spring sport was track and field, where he combined his running and jumping abilities. He was the undisputed county king in the long jump and triple jump.

“I’m proud that I was able to set school records in track,” Westbrook said. “There was a time when I really loved track, but as the years went by, the most important aspect of track was how well it prepared me for  football.”

Westbrook probably has competed in his last track meet. He’s a Catawba football signee and head coach Curtis Walker expects him to be an impact player and a future star as a defensive back. Catawba is starting a track and field program, but Westbrook is fully focused on seeing how good a football player he can become. He needs more weight and strength, but those things are sure to come with natural maturity and regular visits to the weight room.

Westbrook first got interested in track and field when he was at Southeast Middle School. A lot of coaches helped him get his track career off the ground, including Missy Williams, the mother of Westbrook’s basketball teammate, Jailen Williams.

Westbrook was no overnight sensation. As a Carson freshman, he was far from earth-shaking. In the Rowan County Championships, he finished a modest 11th in the high jump and a distant ninth in the long jump.

“That freshman year, I felt like maybe I just wasn’t going to be good enough,” Westbrook said. “But that’s when I made a decision that I had to put in more work. I set some goals, and I was lucky enough to accomplish a lot of them.”

It was a different Westbrook, more polished and confident, showing up for the track meets as a sophomore in the spring of 2015. He had varsity football and basketball success under his belt by then, and that probably made a difference.

He logged his first major titles that spring, winning the long jump in the Rowan County Championships as well as the South Piedmont Conference Championships. In both meets, he was runner-up in the triple jump. He also took second in the SPC in the high jump.

It’s unusual for an athlete to compete in all three jumps — so many leaps, and different kinds of leaps, exact a toll on the body, especially the knees — but Westbrook is a team guy, and the Cougars needed the points. He was a regional qualifier in the long and triple jumps, but he was worn down by then. He didn’t come close to his best marks in the regional.

“I won some championships, but I still didn’t feel like I’d done anything that outstanding,” Westbrook said. “I knew I had to keep working, that I wasn’t where I wanted to be yet.”

More work meant more accolades as a junior in the spring of 2016.  His junior marks stretched the tape down the pit a bit more. In the Rowan County Championships, he defended his title as the county’s long jump champ and won the triple jump for the first time. He also was second in the high jump and fourth in the 200 meters in a magnificent, exhausting effort.

“It was a good meet, although still felt like I could do more,” Westbrook said. “I was satisfied, but not really, if you know what I mean.”

He placed third in the 3A Midwest Regional to qualify for the 3A State Championships, and he took second place in Greensboro with an effort of 22 feet, 5.5 inches.

There didn’t seem to be any track worlds left to conquer for Westbrook, but as a senior in 2017, he went out and topped himself. He didn’t compete in the high jump as a senior, but he exceeded all his previous accomplishments in the long jump, triple jump and 200 meters.

“He was a pleasure to coach,” Carson coach Jason Stanley said. “It made the coaching staff’s job much easier, knowing we had a guy who was  going to go out and score 38-40 points for us, on his own, every meet. He’s one of those rare athletes who could have excelled in any event we needed him to compete in. Yes, he was a county and conference champion in the long and triple jumps, but had he put his time into other events, he could’ve been a champion in the 100, 200, 400, 800 or the high jump. Besides being our school record-holder in the long jump, triple jump and 200, he’s in the top three in Carson history in the 100 and 400. He’s that type of athlete.”

In his final Rowan County Championships, Westbrook took first in the long jump for the third straight season and added his second triple jump title. He was runner-up in the 200 and helped Carson’s 4×400 relay team take second place.

In the South Piedmont Conference Championships on May 2-3, Westbrook pushed to a higher level. That’s when he posted three personal bests and broke three school records. He won the long jump (22 feet, 8.5 inches) and triple jump (46 feet). In the 200, he was clocked in 22.56 for third place.

In the 3A Midwest Regional, Westbrook placed second in the long jump and third in the triple jump. He qualified for the 3A State Championships in both events, but he was drained and sore by that point. He competed only in the long jump and placed fifth (21 feet. 2.5 inches) in his farewell meet.

“I’ll miss track some, but I’ll manage,” Westbrook said. “I’ll have a lot more free time now to do things that will help me with football and school.”

Westbrook’s parents, Shaun and Tonya, are delighted their son became a superb athlete, but while they encouraged him gently in sports, they pushed him more firmly into academics. School has always come first for the Westbrooks, and Brenden made A’s and B’s. He plans to major in criminal justice at Catawba. He sees his future in law enforcement. It’s a way to help people.

On Monday, with his senior beach trip in the books, Brenden started his summer job, working with youngsters at the Hurley YMCA. They couldn’t have a better role model.

“He was just a great leader for our track team,” Stanley said. “He’s an exceptional young man.”

It was a good year for boys  track and field in the county.

East Rowan junior Sean Incardona placed second in the county in three events, while versatile senior teammate Lee Sharum pulled off an unusual double by winning the pole vault and shot put in the SPC Championships.

Salisbury sophomore Tyrone Johnson earned the title of “fastest man in the county” with victories in the 100 and 200 in the Rowan County Championships.

North Rowan junior Daylnn Cuthbertson took eighth in the triple jump in the 2A State Championships.