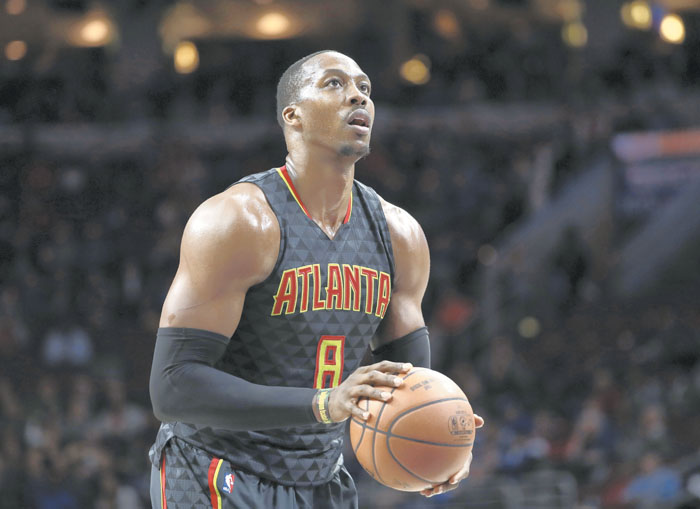 FILE - In this March 29, 2017, file photo, Atlanta Hawks' Dwight Howard prepares to shoot a free throw during the team's NBA basketball game against the Philadelphia 76ers in Philadelphia. A person familiar with the situation says the Charlotte Hornets have reached an agreement to acquire center Howard from the Hawks. The Hawks are sending Howard and the No. 31 overall pick in Thursday's NBA draft to Charlotte for center Miles Plumlee, shooting guard Marco Belinelli and the 41st pick, the person told The Associated Press on condition of anonymity Tuesday, June 20, because the trade is not yet official. (AP Photo/Matt Slocum, File)

By CHARLES ODUM, AP Sports Writer
ATLANTA (AP) — Dwight Howard’s Atlanta homecoming was short-lived.
The Hawks sent Howard and the No. 31 overall pick in Thursday’s NBA draft to Charlotte for center Miles Plumlee, shooting guard Marco Belinelli and the 41st pick, getting the deal completed late Tuesday night.
Howard, an eight-time All-Star and three-time NBA Defensive Player of the Year, will be playing for his third team in three seasons following a disappointing one-year return to his Atlanta hometown.
“We are excited to add a player of Dwight’s stature to our roster,” Charlotte general manager Rich Cho said.
“He has been a very talented player, an elite rebounder and rim protector as well as a physical presence since the moment he entered the league. Howard’s best seasons came alongside coach Steve Clifford and we believe their familiarity will make an immediate impact for the Hornets this upcoming season.”
Clifford was an assistant with Orlando and the Los Angeles Lakers during Howard’s stints with those teams.
“I’m excited about working with Dwight again,” Clifford said. “He brings a defensive mindset, shot blocking ability and a level of physicality that will be a huge asset for us. We look forward to him continuing his career here in Charlotte.”
Howard signed a three-year, $70.5 million deal with Atlanta and then sat out the fourth quarter in two of six playoff games in the Hawks’ first-round loss to Washington.
Howard’s averages with the Hawks — 13.5 points and 12.7 rebounds — were close to his production in his last of three seasons with Houston in 2015-16. Still, he finished the season unhappy about his diminished role in the playoffs, when he averaged eight points and 10.7 rebounds.
“It was very difficult. I want to play,” Howard said after the season. “I want to be on the floor. I want to make an impact. You can’t do it on the bench.”
The Hawks were eliminated in the first round for the first time since 2014. Following the season, coach Mike Budenholzer resigned his additional role as president of basketball operations and Wes Wilcox stepped down as general manager.
The Howard trade is the first deal for new Hawks GM Travis Schlenk, who faces the difficult challenge of re-signing free-agent forward Paul Millsap.
“It is extremely important for our organization that we maintain our flexibility and this trade helps us achieve that critical goal,” Schlenk said. “We appreciate the contributions that Dwight made on the court and in the greater Atlanta community this past season.”
Howard, 31, is due to earn $23.5 million each of the next two seasons.
Plumlee, 28, still has three years remaining on his contract at $12.5 million per season. Belinelli, 31, is set to earn $6.6 million in the final year of his deal.
Michael Jordan’s Hornets have been attempting to land a star player for quite some time and Howard potentially gives them that if he can return to playing at a high level.
Point guard Kemba Walker has developed into an All-Star, but Nicolas Batum struggled last season after being handed a $120 million, five-year contract — the largest ever given to a Hornets player.
The trade also satisfies the Hornets’ search for a true center since losing Al Jefferson to free agency last summer. They had hoped that Roy Hibbert would fill the role of a rim protector, but injuries slowed him down and he was eventually traded to Milwaukee in a midseason deal that brought Plumlee to Charlotte.
Plumlee wasn’t much of a contributor last season for Charlotte and he was beset by injuries.
The Hornets traded away their first-round draft pick in 2016 to acquire Belinelli after losing Courtney Lee and Jeremy Lin in free agency. Belinelli played in 74 games last season and averaged 10.5 points per game on 42.9 percent shooting.
___
AP Basketball Writers Jon Krawczynski in Minneapolis and Tim Reynolds in Miami, and AP Sports Writer Steve Reed in Charlotte contributed to this report.