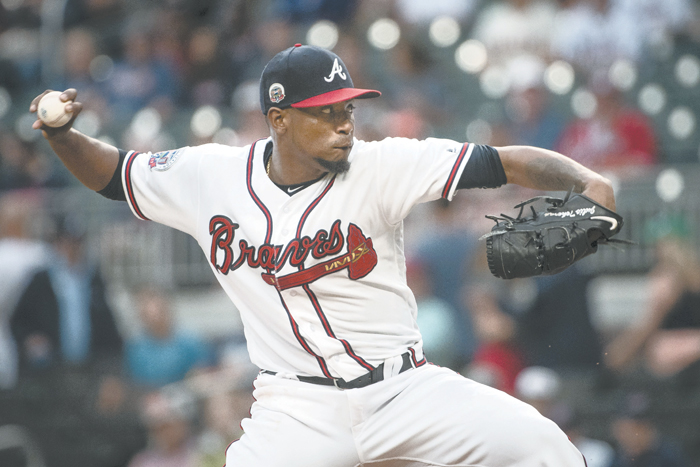 Matt Moore (3-7) pitched seven strong innings for his first win in over a month, and the shaky Giants bullpen protected the lead.

Julio Teheran (6-5) was up 2-0 and cruising toward his first home win since opening night at SunTrust Park, only to be let down by his defense in the eighth inning. The Braves were charged with three errors in all, the biggest coming when shortstop Dansby Swanson dropped a throw trying to turn a double play.

On the very next pitch, Slater lined one into the right-field seats for his second homer of the season. The Giants went on to score five runs in the inning, also taking advantage of throwing errors by reliever Ian Krol and first baseman Matt Adams.

Mark Melancon worked the ninth for his 11th save in 15 chances.

The Braves jumped ahead in the third. Johan Camargo lined one over the head of center fielder Denard Span for a run-scoring triple and came home on a sacrifice fly by Ender Inciarte. It looked like the lead would stand up until the Atlanta defense fell apart.

Hunter Pence reached on a grounder to third base that was generously ruled a hit after Camargo dropped the ball trying to make the throw. Brandon Belt followed with a sharp grounder to second baseman Brandon Phillips, who picked it off and threw to Swanson for what should have been a force out at the very least.

Swanson was looking to get two — only he dropped the ball trying to rush his relay throw. Umpire Quinn Wolcott initially ruled Pence was out, but the call was overturned when the review showed the rookie shortstop never had control of the ball.

Slater’s homer put the Giants ahead for the first time all night, and they tacked on two insurance runs while getting only one ball out of the infield.

Josh Osich and Sam Dyson worked out of trouble in the bottom half, Belt homered in the ninth to pad the lead and Melancon closed it out.

Stephen Piscotty had a two-run double off Casey Fien after Edubray Ramos (0-5) started the inning with two walks. Molina and Pham followed with homers as the Cardinals had their biggest output of the season in an inning.

Aaron Judge hit his major league-leading 24th home run and Gary Sanchez his 12th as New York climbed back from a 3-0 deficit.

MIAMI (AP) — Bryce Harper started the scoring with a two-run single that extended his hitting streak to 13 games, and Gio Gonzalez pitched seven innings to help the Nationals beat the Marlins 12-3 on Tuesday night.

Daniel Murphy had two RBIs and hit his 12th homer for the Nationals. Teammate Stephen Drew had three hits and three RBIs, and Ryan Zimmerman drove in three runs with a double and a single.

Dickerson had his 29th multihit game of the season with two hits. He drove in Tampa Bay’s first run with a third-inning single, then capped their scoring with his 16th home run in the fourth.

MILWAUKEE (AP) — Chad Kuhl got his first victory since April, Andrew McCutchen homered for the fifth time in seven games and the Pirates beat the Brewers.

CHICAGO (AP) — Anthony Rizzo hit another leadoff home run to help Mike Montgomery get his first win of the season in the Cubs’ victory over the Padres.

Rizzo homered on the second pitch from Jhoulys Chacin (6-6) and was the third leading off in seven games since Rizzo was moved to the top of the order by manager Joe Maddon. In those seven games, he is 6 for 6 with a walk to open the first inning.

It also extended his hitting streak to a career-high 14 games.

and came on the day Rizzo took a call from the league office about a collision at home plate with Padres catcher Austin Hedges the previous night.