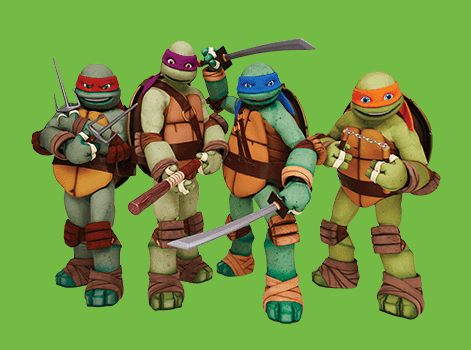 Leonardo, Raphael, Donatello and Michelangelo, everyone’s favorite mutant ninja turtles, are coming to Tweetsie Railroad! Nickelodeon and Tweetsie Railroad invite children to meet the costumed characters when they visit the theme park July 7-9, 2017. The characters will be making scheduled appearances in the Hacienda to take pictures and interact with fans throughout the weekend. Fans can spend time with the Teenage Mutant Ninja Turtles and enjoy a day of Wild West adventure at North Carolina¹s first theme park.

Since its launch in 2012, Nickelodeon¹s all-new CG-animated Teenage Mutant Ninja Turtles has re-energized the iconic characters from this wildly popular franchise. Currently in its third season, the series is seen in over 170 countries and territories, and translated in over 50 languages. Teenage Mutant Ninja Turtles follows four mutant turtles: Leonardo, Raphael, Donatello and Michelangelo‹who battle evil from the New York City sewers. The series is created at Nickelodeon Animation Studios in Burbank, Calif. The Paramount Pictures feature film premiered summer 2014, and to date has grossed almost $500MM worldwide, with a sequel set to be released in 2016.

Visitors can enjoy special appearances from Leonardo, Raphael, Donatello and Michelangelo at 11:00 a.m., 1:00 p.m. and 3:00 p.m. daily, as well as the rides, shows and Wild West fun available all season long at Tweetsie Railroad.

Nickelodeon, now in its 37th year, is the No. 1 entertainment brand for kids. It has built a diverse, global business by putting kids first in everything it does. The company includes television programming and production in the United States and around the world, plus consumer products, online, recreation, books and feature films. Nickelodeon¹s U.S. television network is seen in almost 100 million households and has been the number-one-rated basic cable network for 20 consecutive years.  Nickelodeon and all related titles, characters and logos are trademarks of Viacom Inc.
About Tweetsie Railroad
Tweetsie Railroad opens for its 60th Anniversary season on April 7, 2017. Hours and dates vary; check Tweetsie.com before planning your visit. Tweetsie Railroad is located on U.S. Highway 321 between Boone and Blowing Rock, North Carolina. For more information about the 2017 season at Tweetsie Railroad, visit Tweetsie.com or call 877.TWEETSIE (877.898.3874).

By Austin Young  For the Salisbury Post Salutations from the Fatherland. Some time ago, as a few of you may... read more