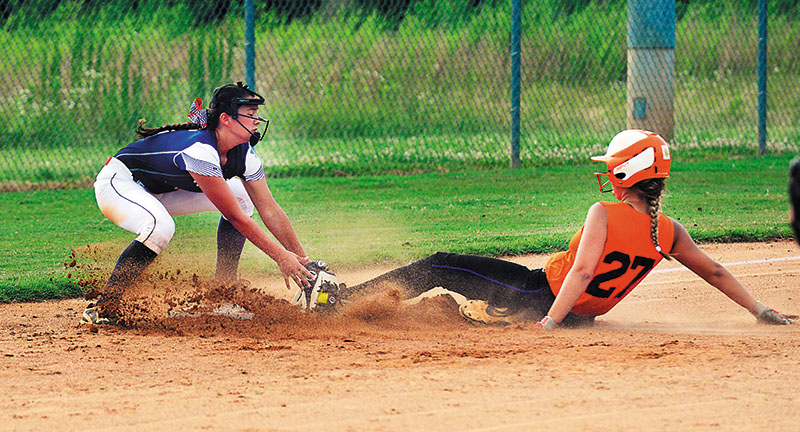 Still, helping Legion softball get off the ground in Rowan County is providing a new avenue for her to shine, and she plans to make the most of it.

“It’s a chance to make history all over again,” Walton said.

Walton did manage some history on Monday. She drove in the first two runs, as Rowan (2-2) won its first-ever home game at Jesse Carson High, 3-0, against Stanly County.

Legion softball games are five-inning doubleheaders that go by quickly. The other wrinkle different from high school softball is an 11-player lineup, with two “extra hitters.” That gives more girls a chance to swing.

“It was a good first night,” Rowan manager Todd McNeely said. “We had the kind of crowd we were hoping to see and we saw two quality ballgames with a lot of good pitching and defense.”

In the first game, Rowan pitcher Maddie Hunter, a Gray Stone Day School graduate headed to Catawba, walked the first two batters she faced and was in an immediate jam.

“It was kind of a tight strike zone, but I needed to work through it,” Hunter said. “I just had to find a consistent pitch, and I did.”

Hunter got a swinging strikeout on a pitch up around the letters to record her first out of the night, and it was smooth sailing after that. The last nine batters Hunter faced went down meekly. She struck out five in her three innings of work.

“I live in Rockwell, so this is fun playing with some of the East Rowan girls I know,” Hunter said. “This is a new beginning.”

Stanly pitcher Adison Campbell, a rising junior at South Stanly High, maintained a scoreless tie for three innings, but the home team gathered momentum in the top of the fourth when young Rowan third baseman Ellen Yang made two nice plays, stabbing a bullet before charging and making an accurate throw on a slow bouncer.

Rowan players gathered around coaches before batting in the bottom of the fourth.

“These games are going to come down to who can get to the other pitcher first,” McNeely said. “We told the girls we had to get some baserunners, and it didn’t matter if it was hits or walks. We told them if we could just get a run we would win.”

Yang bats 11th in the Rowan lineup, so even though it was the fourth inning, it was her first trip to the plate. She drew a pivotal walk to start the inning.

Leadoff hitter Maddie Trexler’s bunt traveled only a few inches in front of the plate, but the East Rowan outfielder is fast enough that Stanly had no play and Rowan had two on. When a pitch squirted a short distance away from Stanly’s catcher, Yang set sail for third and was ruled safe in a close play, as Trexler moved up to second base. Walton was next.

“She was pitching everybody away,” said Walton, a lefty swinger who had bounced to the third baseman on her first at-bat. “I needed to make an adjustment and to do what I could as far as placing the ball.”
Walton adjusted and sliced a liner toward the left-field chalk. Yang trotted home, and Trexler also scored easily. Walton alertly advanced to second on the throw home, and then moved over to third on a passed ball.

Cleanup batter Brooke Lowery, a lefty slugger who is a rising senior at South Rowan, had smashed a single her first time up, and this time she sent a towering drive spiraling toward the right-center gap. Lowery was thrown out trying for a triple, but her blast gave Rowan a 3-0 lead.

“Hitting is contagious,” McNeely said. “And as soon as one of them starts, they all do.”

Haley Strange, a youngster who just finished the eighth grade at Erwin Middle School, relieved Hunter for the fourth inning. She pitched a tense fifth that included two walks and a single, but she didn’t allow a run. Rowan catcher Mackenzie Sprinkle helped her out. Sprinkle, a rising junior at East Rowan, blocked a pitch in the dirt and threw out a runner trying to advance to third base. Yang made a nice tag, and Rowan got a huge call.

Then the game ended on a sharply hit ball that Lowery fielded a step from first base.

But Stanly won the second game behind shutout pitching by Campbell.

“She threw a lot more off-speed pitches in the second game,” McNeely said. “And we struggled to adjust.”

Rowan pitcher Karley Teague (East Rowan) walked Chloe Rabon with the bases loaded and two out in the fifth for the game’s only run.

“We almost had a strikeout to get out of that inning, but we didn’t get a close pitch,” McNeely said. “It was a tough one. Karley pitched a great game.”

NOTES: Shortstop Hannah Pratt (West Rowan) had hits in both games … Rowan hosts Cabarrus  County (2-0) on Thursday. That doubleheader starts at 6 p.m. Admission for adults is $6.  … McNeely’s many duties on a long Monday at the ballpark included field maintenance and concessions cleanup. He’s optimistic that more volunteers will climb on board.