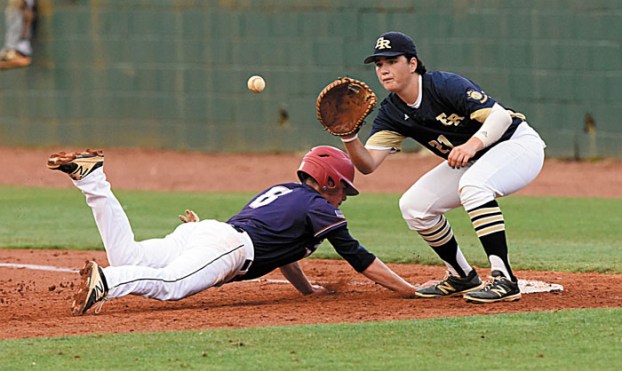 Legion baseball: Rowan rolls to 16th win in a row

Kannapolis fell, 16-14, to Rowan on opening night after a fierce fight and also had a chance for a while on Tuesday.

Rowan led only 2-0 going to the fifth inning against Kannapolis starter Drake Vernon, but that’s when Lee Poteat doubled and scored a balk. Moments later, Chandler Lippard, who had two quick strikes on him, destroyed a down-the-middle, 2-and-2 fastball for a three-run homer, and Rowan was up 6-0 and headed for the winner’s circle once again. The final score was 12-1.

“Going 16-0 in baseball, just isn’t something that happens a lot,” Myers said. “But we just go out and compete. We believe if we do our jobs, then we’ll win.”

Myers (3-0) was efficient in his six innings — four hits, no walks, no wasted time. He went after early contact and got it.

“When I was warming up, I felt great, and it carried over into the game,” Myers said. “They’re an aggressive team with the bats, and I was getting a lot of quick outs. I had command of everything and I was hitting spots. The slider was especially good for me tonight, and even when they hit the ball hard, it went at somebody.”

Vernon, a lefty from A.L. Brown, was tough in the second, third and fourth, but Lippard’s bomb changed the game in the fifth.

Rowan tacked on single runs in the seventh and eighth before piling up four more in the ninth. Cleanup man John Owen was glad to get another chance to swing in the ninth. He was the only guy in the lineup who hadn’t produced a hit, and he creamed a two-run double.

Rowan had 15 hits, including six doubles, two by Poteat. Trevor Atwood had three hits. Lippard and Brett Graham had two. Owen, Atwood and Brandon Walton drove in two runs each.

Kannapolis catcher Tristan “Shaggy” Wyatt, who played at South Rowan High, drove in the Kannapolis run in the fifth. Kannapolis strung together hits by Jacob Tuttle, Cal Hubbard and Wyatt against Myers in that inning. Tuttle scored from second base on Wyatt’s sharp single.

Will Brown pitched the seventh and eighth for Rowan. Kannapolis hit several balls on the nose, but they were caught.

Noah Gonzalez threw the ninth for Rowan. Kannapolis (0-9, 0-4) loaded the bases with two hits and a walk, but Poteat made a running catch in right field to end the game.

NOTES: Rowan has won 10 straight against Kannapolis. The last victory by Kannapolis against Rowan County came on Jordan Goodman’s walk-off homer off  Brian Bauk in 2012, with a late-arriving Corey Seager standing in the on-deck circle. Seager had been watching himself get drafted in the first round by the L.A. Dodgers on TV, then rushed to the ballpark. …  Rowan coach Jim Gantt is making quick progress toward  500 Legion wins. Last night was No. 482.  … Kannapolis second baseman Matt Baucom, an All-State player from A.L. Brown, made a fabulous defensive stop for an out in the sixth inning. … Rowan has a big game at Concord tonight and will be home on Thursday night against Mocksville, a game that was a road game on the original schedule. … The boxscore for the game is in Scoreboard.