In Gold Hill, tall tales abound, but in the end, they pay off 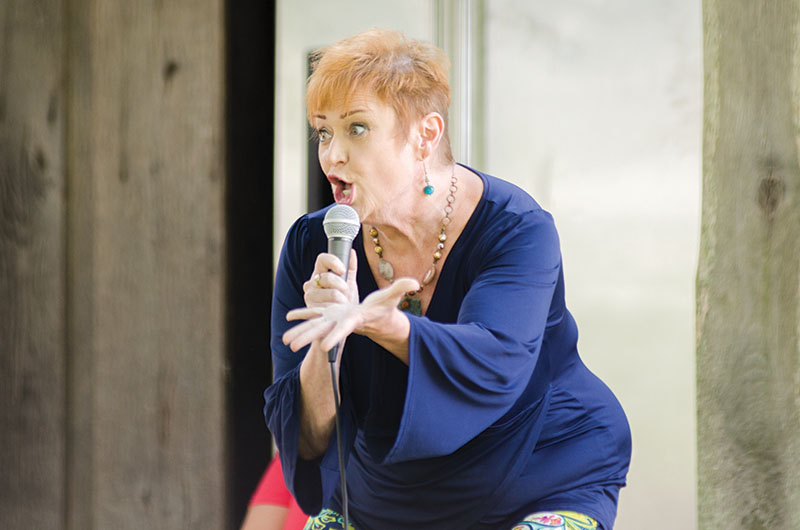 GOLD HILL — When they called it the “Tall Tale Tellers Festival,” they weren’t kidding.

If you wanted to hear about scary forests, talking snakes, strange gardens, a place called Sunshine, big fish, Bigfoot, five-pound tomatoes and a child’s haircut gone terribly wrong— among other things — then Gold Hill was the place to be Saturday afternoon.

A good-sized crowd sitting on rock fences, at picnic tables, on coolers, in lawn chairs or on the grass spreading out from The Arbor in the Historic Gold Hill Village heard 10 different storytellers competing for cash prizes.

In the end, Vickey Cline won the day and the $250 first-place prize for her tall tale — or was it? — about her disdain for cows and how important it was to keep them out of the “Big Woods.”

In those woods, the ticks were as big as box turtles. The spiders were so large that deer became tangled in their webs. The creek was so cold the fish came out frozen. And going after the mosquitos required a hunting permit.

Kier Skipper took home the second-place prize of $100 for his original story, done completely in rhyme, on why you should never have carpet on your floors.

Third place and $50 went to Spencer Dixon, who shared the story of Sikapotat, a prankster fish that magically grew to be three canoes long at the Victory Junction camp for kids, thanks to having eaten one of the magical feathers in King Richard Petty’s cowboy hat.

They all participated in this first Tall Tale Tellers Festival, sponsored by the Gold Hill Merchants Association. Host Sandy Hickman, who owns the Back Home shop in the village, judged it a great success.

After the tale-telling was over, many people stayed and visited some of the village’s stores, which include Back Home, Southern Belle & Pearls; Bakery Baskets & Gifts; River Pines Art, the Be Inspired Feelin’ Station, Morgan Ridge Vineyards at the Village, Montgomery Store, Mauney’s Store, Mr. Fulbright’s Shop and Post Office Concessions, J.J’s Produce and Nancy Knowles’ Photography.

The stories Saturday, told amid a backdrop of big shade trees and a picturesque pond, generally were kept to about 6 minutes. The volunteer judges were Jackie and John Mills, Judith Kroll and Susanne Dillingham.

Markham used to operate the village restaurant, which is looking for a new tenant, and in her tall tale, she said two things are certain: 1) taxes; and 2) Gold Hill is haunted.

Markham told her audience about the ghost in the restaurant kitchen and being in Mauney’s Store and hearing the footsteps of ghosts walking back and forth upstairs. Or how about that orb of a spirit caught by the surveillance camera at File’s Store?

Callahan preferred to tell his story about Nancy, the dancer, and her connection to President Lincoln from the comfort of a rocking chair.

You might have heard the story before, Callahan told his listeners, but “you haven’t heard it the way I tell it.”

Osborne and Burding told wildly different stories, but somehow each one involved a talking snake.

Burding’s snake was much scarier, threatening to eat her protagonist at midnight after she had gotten lost in the woods. It was a pair of white birds, which the storyteller had freed in the woods as a child, that ended up saving her life some 25 years later.

Now that’s a tall tale, which involved a thousands-year-old temple, too.

Osborne’s protagonist, Bob, made a fortune off his talking snake, but he titled his story “The Reptilian Tragedy,” because Nate the snake died in the end. Bob had to make a choice between killing Nate or pushing a lever that would end the world.

The moral of Osborne’s story: “Better Nate than lever.”

Insert the moan here. And so it went in Gold Hill Saturday.