Childress moves up to 19th, Edwards 22nd at NC Amateur 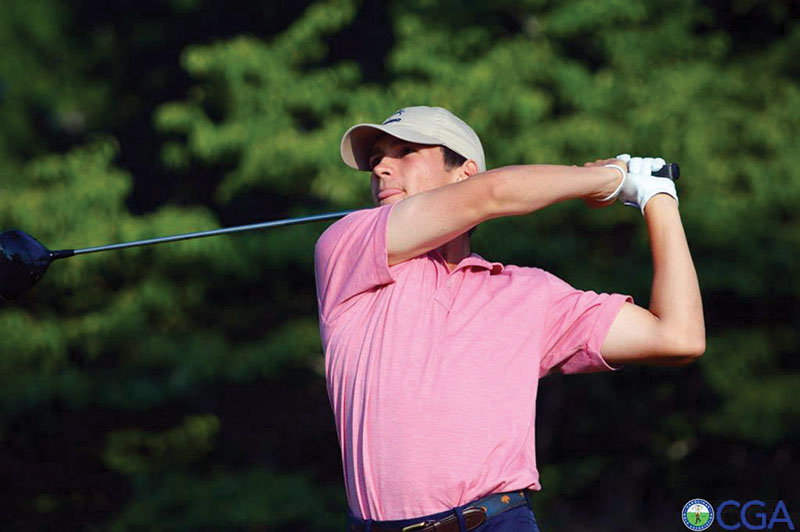 Photo courtesy of the CGA Michael Childress, of Salisbury, tees off at River Run Country Club in Davidson on Sunday, during the final round of the 57th North Carolina Amateur Championship. Childress shot a 73 to finish in a tie for 19th place.

Eric Edwards and Michael Childress, both of Salisbury, finished in the top 25 of the 57th North Carolina Amateur, Sunday at Davidson’s River Run Country Club.

Childress, a 17-year-old senior at Cannon School in Concord but whose home course is the Country Club of Salisbury, made the biggest move on Sunday, shooting a 1-over par 73 and going from 31st place to tied for 19th. The 73 was Childress’ best of the four rounds, giving him a tournament total of 297 (75-74-75-73).

A total of 153 of the top amateur golfers in the state began the tournament on Thursday, including last year’s champion — Nick Lyerly, who became the youngest ever to win the N.C. Amateur. He had a score of 280 at Governor’s Club in Chapel Hill.

Justin Tereshko, of Greensboro, the third-round leader, shot a 1-over 73 on Sunday to win the championship with a total score of 283. He finished three strokes ahead of three players tied for second place at 286 — Kevin O’Connell of Cary, Jake McGlone of Charlotte and Lansdon Robbins of Davidson. Josh Nichols of Kernersville stood alone in fifth place at 287.

Childress concluded a strong performance in the tournament on Sunday with four birdies, nine pars and five bogeys. He had just one double bogey in four rounds, that one coming on the ninth hole during Saturday’s play.

Childress played 36 holes on Saturday, in the morning in Davidson and then in the afternoon, qualified for next weekend’s Rowan Masters by firing a 67 at Warrior Golf Club in China Grove.

As luck would have it, Childress had the first tee time on Sunday, going off No. 10 at River Run at 8 a.m.

“It was good … I still left some out there by today (Sunday), but it was definitely the toughest day, from a course set-up standpoint (76.2 rating). I don’t think there was a score under 70.

“We played the course all the way back (tees) for the first time all week on Sunday and they tucked the pins some and took birdies out of play on several holes,” continued Childress. “You had to use good course management and settle for pars.”

“All in all, I’ve been hitting it well, but I was more patient today,” added Childress. “I debated going for the green on No. 18 but I laid up, made a really good two-putt and that gave me momentum going on to the front. So, I was pretty happy with the 35 on the front. Under par on any nine on that course is pretty good.”

Childress had nine birdies and 46 pars during the four rounds and played the par-5s at 1-under par and the par-3s even.

Edwards had an eagle, six birdies and 48 pars during the tournament. He played the par-5s at 3-under par but the par-3s at 5-over.

NOTES: The N.C. Amateur Championship began in 1961 and is the state championship for men ages 13 and over. … Robbins is Childress’ teammate at Cannon School and both finished in the top 19. … Childress will be the No. 3 seed at the Rowan Masters when play begins on Friday at the Warrior. … He is also scheduled to play in the N.C. Junior Amateur at Colonial Country Club in Thomasville, beginning on June 27.