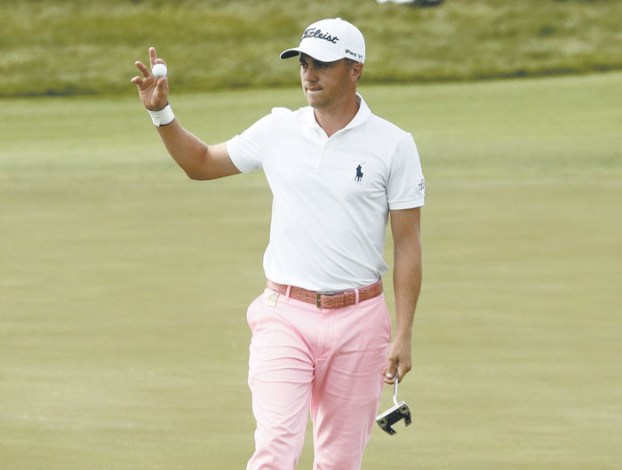 Justin Thomas reacts after his birdie on the 17th hole during the third round of the U.S. Open golf tournament Saturday, June 17, 2017, at Erin Hills in Erin, Wis. (AP Photo/A Charlie Riedel)

Thomas shoots 63, trails Harman by one in US Open

ERIN, Wis. (AP) — Justin Thomas managed to stand out in a U.S. Open where par is going out of style.

All it took was a 9-under 63, the lowest round to par in a major long known as the toughest test in golf. Thomas capped off his record day on the 667-yard 18th hole at Erin Hills with the prettiest 3-wood he ever hit, stopping 8 feet away on a green where some players struggled to land a wedge.

He made the eagle to get his name in the record book Saturday.

The lead, however, belonged to Brian Harman.

Harman closed with two birdies and three tough pars for a 5-under 67 that gave him a one-shot lead at 12-under 204.

Erin Hills again lacked enough wind to be the stern test the U.S. Open wants, and it showed. There were 18 rounds in the 60s on Saturday. Going into the final round, 42 players were still under par.

“Usually when you shoot even in a U.S. Open and you’re one off the lead, you’re not six down afterward,” J.B. Holmes said.

In the 116 previous U.S. Opens, only six players had ever reached 10-under par or better, never in the same tournament. By the end of a wild and wide-open Saturday, five players were double digits under par.

Brooks Koepka made three birdies over his last seven holes for a 68 and joined Thomas one shot out of the lead.

Also at 11 under was Tommy Fleetwood, who was poised to take the lead until his pitch came up short, his next shot went 60 feet down a slope on the back of the 18th green and he turned potential birdie into bogey and settled for a 68.

Rickie Fowler, on the verge of being left behind, rallied with three straight birdies and shot 68. He was 10 under, only two shots behind.

Thomas finished in style, and it had nothing to do with his hot pink pants. He had 310 yards to the hole when he hit 3-wood that could have led to big trouble if he went too far long or left.  “Oh gosh, Jimmy, be good,” he said to caddie Jimmy Johnson when the ball was in the air, and it was close to perfect.

Thomas poured in the eagle to become the 29th player with a 63 in a major championship.

“The finish was awesome. I’d love to have another one of those,” Thomas said.

He might need one at this rate. About all that save Erin Hills from another onslaught was a forecast for the strongest wind of the week. Regardless of the weather, it didn’t take long for the 24-year-old Thomas to understand the significance of his record round.

“That means I’m a part of history,” he said. “It means I have a lot better chance to win the tournament than I did when the day started. I felt like I’ve been playing pretty well all week, and didn’t have quite the numbers to show for it. Obviously, today I definitely had something to show for it.”

Thomas, a major away from joining the young elite in golf, only added to a year of low numbers. He made an eagle on his final hole at the Sony Open in January to shoot 59, and he went on to break the PGA Tour’s 72-hole scoring record.

The U.S. Open didn’t seem to faze him, and he delivered a variety of big shots that led to his sensational finish.

He rolled in an 18-foot birdie putt on No. 5 from the edge of the green that broke so severely that he stood with his toes facing the hole and rapped the ball toward his left foot. It took a hard turn to the right and rolled in. In the hay left of the 12th fairway, he gouged it out with a 9-iron and watched it roll to 10 feet.

And with the tees moved up on the 15th hole to make it reachable, Thomas hit a 3-wood that rolled off the back slope of the green to 6 feet. He two-putted for birdie, and he rolled in a 25-foot birdie putt on the 17th.

“It doesn’t matter how long, how whatever the course is,” Thomas said about the longest course in major championship history. “When you give us soft greens, good greens and not much wind, you know there are going to be some good scores. I was just happy that I was the one that was able to take advantage of it today.”

But the work is not done.

Of the five other players who shot a 63 in the third round at a major, none went on to win. Most of them had to come from far back going into the weekend, and it was difficult to put together two good rounds.

Then again, none of the top 16 on the leaderboard has ever won a major.

BRIAN HARMAN LOOKS FOR MAJOR BREAKTHROUGH AT US OPEN

ERIN, Wis. (AP) — Brian Harman stood on the podium with hands on hips, giving answers in the kind of matter-of-fact voice expected from someone used to the spotlight of a major championship.

Harman might be the surprise leader after three rounds at the U.S. Open, but there was nothing ordinary about his game.

The left-hander shot a 67 to reach 12 under and take a one-shot lead over Justin Thomas, Brooks Koepka and Tommy Fleetwood.

“Yeah, first cut made, too (at the U.S. Open),” Harman said. “So we’re breaking down all kinds of barriers.”

The 30-year-old Harman has five top-10 finishes and two victories since joining the tour in 2012, most recently at the Wells Fargo Championship in May. Harman made a 30-foot birdie putt on the final hole to hold off Dustin Johnson and Pat Perez by a stroke.

But the third-round leader at the U.S. Open?

Harman is playing in just his eighth major, and it’s only the third time he has made the cut.

When asked, Harman said that he plays with a proverbial chip on his shoulder. He showed spunk after holding off Johnson at Wells Fargo, a victory that secured him a spot at Erin Hills.

“I think since my dad dropped me off at football practice and told me to not be disappointed if I didn’t get to play at all,” Harman said, drawing laughs. He is listed at 5-foot-7, 150 pounds.

“I played a lot,” a smiling Harman said.

Harman had one bogey Saturday, at the par-4 third hole, to go with six birdies. He said he has a plan in the works for Sunday.

In between, he was spending a routine night in with the family.

“I’m going to enjoy my time tonight with my little girl and my wife. We’ll probably watch some TV and hang out,” Harman said.

“But I’m confident that I am prepared for whatever happens,” he added, “whether something bad happens or something good happens — I’ll just rely on that confidence.”

From staff reports Qualifying rounds for the upcoming Rowan Masters were played at Warrior Golf Club on Saturday. The top... read more