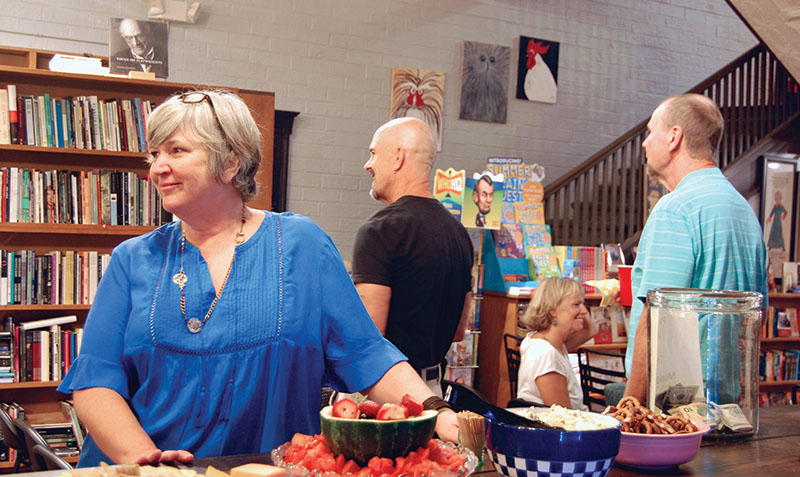 SALISBURY – Even as the rain poured down outside, approximately 20 book-lovers huddled near the back of South Main Book Company Tuesday night.

They had come to celebrate the three-story bookstore — located at 110 South Main St. — and its first year in business by sharing food, music and fellowship.

She said, before the event started Tuesday, that her decision to purchase the store last year had felt natural.

“I had worked here for a year, and I owned a bookstore down in Georgia and I had sold that and had a couple of other businesses in between,” she said. “I just am a terrible employee, frankly, with all of my control issues, so I like to do the thing. I like a big project.”

Since the store opened, both it and Beeker have attracted quite a few fans.

Grant Peeples — the singer-songwriter who was invited to perform at the anniversary party — met Beeker at a Southern booksellers’ conference in Savannah, Georgia.

“We actually sat down at a table and had lunch together and I told her what I did. And she said, ‘If you’re ever coming through, let me know.’ And that’s how I got here,” Peeples said.

Another of Beeker’s friends, Sue McHugh, said, during a break in Tuesday night’s musical performance, that having a three-story bookstore in a town of Salisbury’s size is a “treasure.”

Beeker said that the best part of running the store so far has been her customers, whether they be friends or strangers.

“I mean, it was crazy, at Christmas I worked seven days a week for three months and it was awesome,” Beeker said. “Those first-time people, when they walk in, I can hear it in their voices and there’s a big sigh, you know. They love it. So what a good gig, you know, I have.”