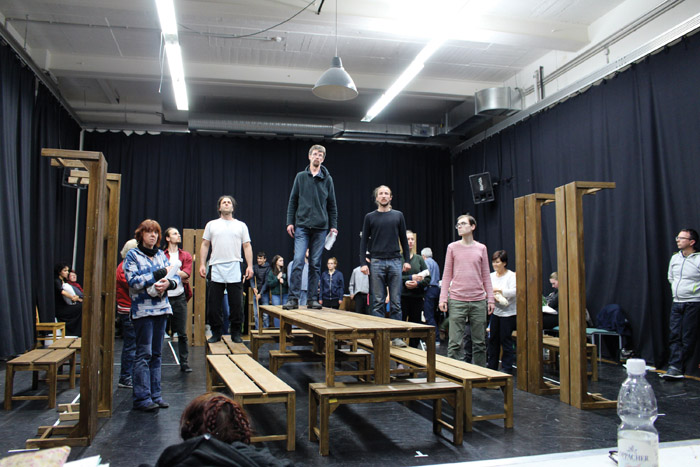 ‘In God’s Own Country’ in rehearsal in Germany

Salutations from the Fatherland. Some time ago, as a few of you may recall, there was an article titled, “Aspiring local actor starts internship in Germany.” Well, ladies and gents, it just so happens that I am that aspiring local actor. Since February I have been the advance guard and liaison for an upcoming collaboration between our very own Piedmont Players Theatre and the Landesbühnen Sachsen outside of Dresden, Germany.

This project coincides with and commemorates the 500 anniversary of the Protestant Reformation. It is a new play that explores the relationship between Old World religion and the birth of the American nation.

Specifically, this play takes an intimate look at the historical figure Heinrich Melchior Mühlenberg (Henry Muhlenberg) and his role in the establishment of the Lutheran church here in God’s own country. That’s not just my patriotism shining through after so many months away from home; it’s actually the title of the play.

“In God’s Own Country” will be coming to the Meroney Theatre in October, with music performed by St. John’s Lutheran Church Choir.

Piedmont Players and the Landesbühne have both put in substantial hard work. Acting on behalf of Piedmont Players, I have spent the past four months in rehearsals — serving as an actor, an assistant director and learning how this play fits together in order to later stage this production on American soil.

For eight hours a day, nearly every day, I find myself scurrying about the massive complex of the Landesbühnen Sachsen to work with professional actors, a wonderful community company, a top-notch technical staff and the elaborate inner-workings of a state-run professional theatre — all in a language I still don’t speak. The challenges are daunting and change almost daily. I can’t imagine a learning experience of any more depth and breadth.

This production is immense in scope and scale. Not only that, the play itself is built around the spirit of community. With that in mind, starting in the late summer and continuing into the performances in October, Piedmont Players will be turning to the community to fill roles, build sets, act as our running crew and do all the seemingly impossible things it takes to put up a show.

This will be a unique and wonderful opportunity to work with professional, international actors on a production that has only been done once before. Tell your friends, your family and even strangers on the street that there’s work to be done, and we need all hands on deck to really make this piece shine.

On June 11, “In God’s Own Country” started its German tour, which also begins the final leg of my time in Germany. From now until my departure on July 15 there will be a vast amount of work as we take this play from town to town to spread the genuine goodness that is theatre.

In the spirit of the travel-logs of great Americans abroad, the Post will have brief columns written by yours truly about the experience of traveling with a production through the eastern side of Germany.