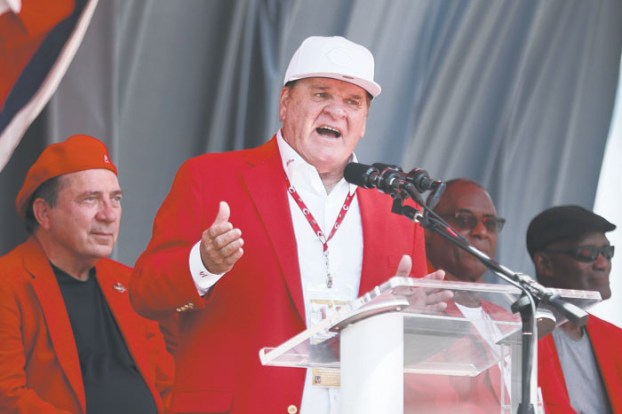 Former Cincinnati Reds player Pete Rose speaks during a ceremony to dedicate of a statue of his likeness outside Great American Ballpark prior to a baseball game between the Cincinnati Reds and the Los Angeles Dodgers, Saturday, June 17, 2017, in Cincinnati. (AP Photo/John Minchillo)

CINCINNATI (AP) — Pete Rose tugged on the edge of the tarp and slowly unveiled a bigger-than-life sculpture of one of his headfirst slides, revealing it from the airborne cleats to the ground-scraping elbows. The Reds’ banished hits king was finally in bronze.

On a sizzling afternoon, thousands of fans packed the entrance to Great American Ball Park for the latest tribute to their favorite baseball son. The Cincinnati native became the eighth Reds star honored with a sculpture outside the ballpark.

“It’s just an honor to be on the same block with these guys,” said Rose, who is banned from Cooperstown because he bet on baseball. “This has to be the ultimate goal for any player of his or her sport.”

With Major League Baseball’s permission, the Reds have been catching up on honoring their most famous — and most controversial — player in the past few years. Last June, they inducted him into the team’s Hall of Fame and retired his No. 14 in front of capacity crowds.

With the Reds still in a rebuilding phase on the field, the weekend honoring Rose with a sculpture became their biggest promotion.

They drew 36,613 fans for their game Friday night against the Dodgers that kicked off the weekend festivities, their largest crowd since opening day. The Reds lost 3-1, extending their losing streak to seven games.

It was 90 degrees on Saturday — several fans fainted in the tightly packed crowd — for the unveiling before the second game of the series. The game drew the Reds’ first capacity crowd since opening day.

The 76-year-old hits leader is banned from baseball’s Hall of Fame. Commissioner Rob Manfred has denied Rose’s latest petition for reinstatement, but hasn’t ruled out making him eligible for Cooperstown someday.

Hall of Famers Johnny Bench, Tony Perez and Joe Morgan were among those attending the festivities on Saturday. Morgan missed last year’s gathering because of long-standing health issues. Morgan walked with the help of two metal canes on Saturday.

Bench, Morgan and Perez already had sculptures outside the ballpark.

“A very grand moment, and Pete makes it perfect to top it off,” Bench said, later adding, “It’s impossible with the four of us to ever break us up.”

During a media availability, Rose addressed the strained relationship he once had with Bench, who was inducted into Cooperstown in 1989. Rose noted that baseball’s investigation of his gambling consumed that summer and overshadowed Bench’s big moment. Rose said he would have been upset, too.

“Believe me, I didn’t ask for that investigation,” said Rose, who denied for years that he had bet on baseball before finally acknowledging that he had.

Rose said the two of them have a good relationship. Bench agreed, teasing him about their failed partnerships in a bowling alley and a car dealership.

Rose also took issue with suggestions that the Reds spend too much time honoring the Big Red Machine that won World Series titles in 1975-76. Rose said that honoring those teams and players also honors the franchise.

“If that don’t make any sense, you can go to hell,” Rose said.

Rose wore an all-white Reds cap and his Reds Hall of Fame jacket for the sculpture unveiling and an on-field ceremony before the second game of the series against the Dodgers. Rose thought it appropriate that he was depicted sliding headfirst, something he said he started doing when he was 9 years old.

“I think you’d have to agree that I was kind of known for being aggressive, and part of being aggressive is sliding headfirst,” Rose said, adding, “And you always get your picture in the paper.”

Rose also will be inducted into the Philadelphia Phillies’ Wall of Fame in an on-field ceremony on Aug. 12 prior to the club’s game against the New York Mets. Rose helped the Phillies to one of their two world championships during his five seasons in Philadelphia from 1979-83. He was selected through fan voting and is the 39th inductee into the club’s Wall of Fame.

ATLANTA (AP) — Brandon Phillips is swinging a big bat at home in his first season with the Atlanta Braves.... read more