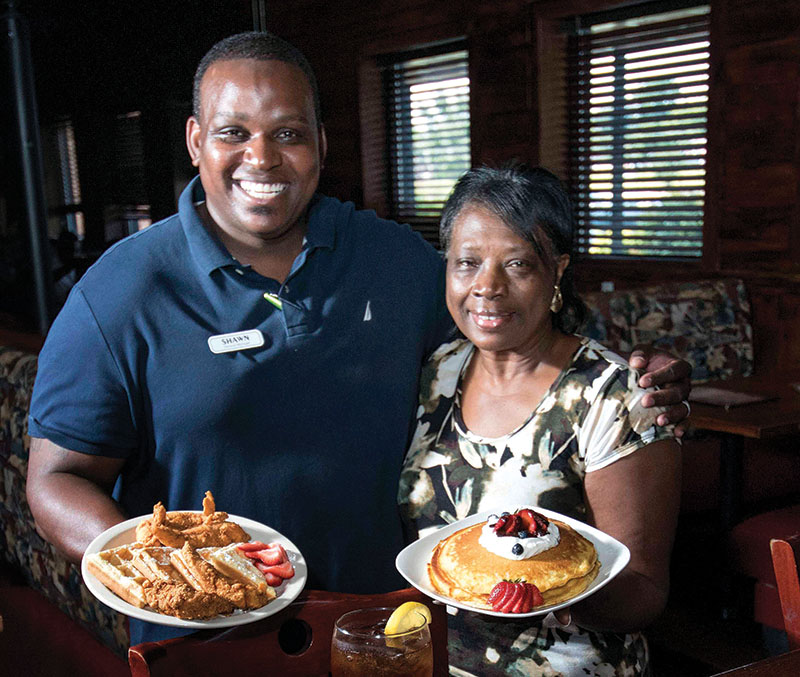 JON C. LAKEY / SALISBURY POST Shawn Blackwell and Themla Luckey pose with several plates of favorites at the Thelma's restaurant at West End Plaza. Thelma Luckey, owner of two restaurants bearing her name, is in the works of opening a third and yet distinctive eatery. Eight years ago Thelma opend the 300 seat restaurant in the former Salisbury Mall now West End Plaza. Last year Thelma opened a smaller restaurant in Mooresville. Next month, Thelma expects to open on Fisher Street in the space that was recently housed Mike and Paula's Eatery. Thursday, June 15, 2017, in Salisbury, N.C.

With two successful Thelma’s Down Home Cooking restaurants already running – one on Jake Alexander Boulevard in Salisbury and one on East Plaza Drive in Mooresville – Luckey said she had enough on her plate.

But then, she said, an opportunity fell into her lap.

“And so, the person who owned this location gave me a phone call and wanted me to look at his place and see if I was interested in coming downtown,” Luckey said Thursday. “So I thought about it and I thought, ‘Well, this is my opportunity to take this next step.’”

That person was Mike Preslar, former owner of Mike and Paula’s Eatery. Luckey said that he had always been a fan of hers, even when Thelma’s was just a booth in the Salisbury Mall food court in 2009.

The former Mike and Paula’s Eatery – located at 105 East Fisher St. – is currently being renovated to fit Luckey’s taste.

“It’s taken us a longer time. I could have come in the way they had it, but I just wanted to put a little final touch to it, I wanted to make it different from theirs and I want to make it my style,” Luckey said.

Once the renovations are complete, Luckey and one of Thelma’s general managers, Shawn Blackwell, said that it’s going to be a different experience from that of the other two Thelma’s locations.

“The idea of it is we want to transform the restaurant,” Blackwell said. “So, from 7 a.m. until 3, it’s going to be really casual. From 5 until 10, the attire that the waitresses wear changes, we bring out white tablecloths. It’s going to be a different experience because we want to do a higher-end version of what we’re already doing here.”

Another difference Blackwell mentioned is that the downtown location will be serving breakfast, a meal not yet on the menu at the other two Thelma’s locations.

The new downtown location will also be partnering with Skinny Wheels Bike Shop to deliver country cooking right to the doors of downtown businesses.

“We’re going to be the only restaurant downtown that’s actually doing delivery,” Blackwell said. “So it will be Thelma’s Delivery, Powered by Skinny Wheels.”

Blackwell and Luckey expect to open the new location on July 1 at 7 a.m.

Jason Rollins is also a manager of Thelma’s and has been actively involved in the opening of its third location.