Juneteenth proves to be day of history, conversation 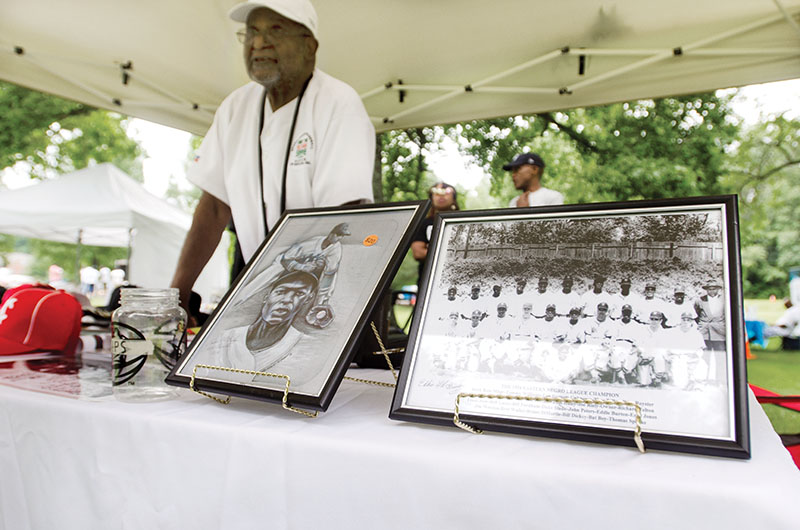 Burton still looks as though he could play second base and outfield for the Harrisburg (Pa.) Giants of the Eastern Negro League, and back in the 1950s, that’s what Burton was doing.

Burton played for the Giants in the Negro League — they were the 1954 champs — and otherwise barnstormed with the likes of Satchel Paige through the coal regions of Pennsylvania.

A resident of Charlotte today, Burton was selling his own baseball story and Negro League merchandise in general at Saturday’s Juneteenth celebration at Kelsey-Scott Park.

It was a day for history, conversation, music, dance and games.

Several community groups, such as Spoken Angels and Salisbury Indivisible, to name a few, were on hand to meet people. Democracy North Carolina was registering people to vote, and the Thelma Smith Foundation South Branch was giving away used clothes and shoes to anyone in need.

Plenty of food and refreshments were offered, and somehow organizers kept the threat of rain showers at bay, affording the chance for songs, dance and a musical performance from Divided by Four.

The word “Juneteenth” reflects a combination of “June” with the date “June 19th.” It marks June 19, 1865, when U.S. Maj. Gen. Gordon Granger, commanding 1,800 federal troops arriving in Texas, ordered that “all slaves are free” in Texas and that there would be an “absolute equality of personal rights and rights of property between former masters and slaves.”

Granger’s announcement finally marked the end of slavery, even though it came more than two years after President Lincoln signed the Emancipation Proclamation, almost five months after Congress passed the 13th Amendment and more than two months after Gen. Robert E. Lee surrendered his Confederate army at Appomattox Court House.

During the Civil War, white planters had moved large numbers of their slaves to Texas, hoping to keep them in bondage and away from the U.S. Army. Even after Lee surrendered, Confederate Texans tried to sustain the rebel cause.

Anthony Smith, in reciting some of the Juneteenth history, said Texas still had 250,000 slaves at war’s end, and it took Granger’s arrival with federal troops to do away with this last vestige of slavery in the country.

Today, 45 states hold some kind of Juneteenth celebration. Before he reviewed some of the Juneteenth history, Smith said it was important to ask two questions: Do you feel free? Is justice even possible in this community?

Salisbury Mayor Karen Alexander and East Spencer Mayor Barbara Mallett were on hand for Juneteenth. Mallett reviewed the close to $6 million of grant projects in the pipeline for her town.

Mallett reminded the Juneteenth crowd that East Spencer, which has a population of 1,566 people, is the only African-American town governed by African Americans in Rowan County.

But back to Burton, the old ballplayer. He said he was an average hitter, a speedster and someone who played good defense. In the barnstorming days, when the baseball teams arrived, “the whole town shut down” and went to the ballpark, Burton said.

By they way, what did the “G.G.” stand for in Burton’s name?

He answered “God’s Gift.” That was, Burton said, until he married a girl named Gail. Then he was “Gail’s Gift.”