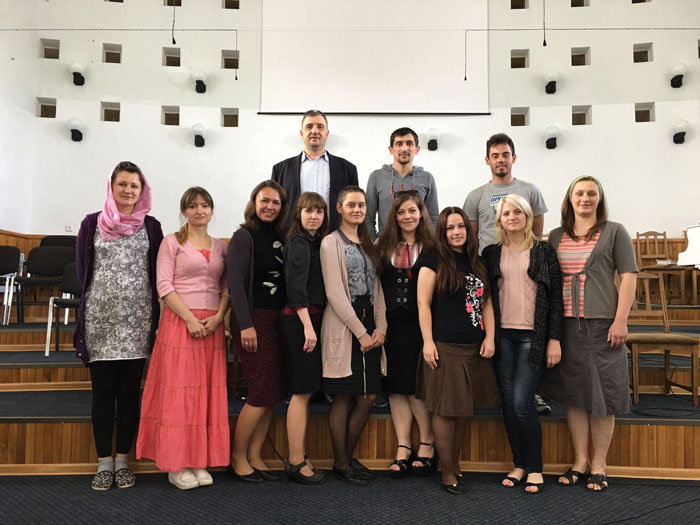 Some of students at Kiev Regional Bible College

My sixth trip to the Ukraine began on May 18 when I left Salisbury and drove to Park n’ Go which is located not too far from Charlotte’s Douglas Airport. After an uneventful trip to Munich, I connected on a flight to Boryspil Airport in Kiev, which was about 12 hours of actual flight time from Charlotte to Kiev.

As on my other trips, Vitaly Schulga was waiting for me and after a pleasant ride of 40 minutes, we arrived at the College where I was taken to my room and told that supper would be ready in five minutes. I always say that Ukrainians do everything quickly — walking, talking, eating and yes, driving!

The meals were again something to experience, usually the portion on the plate which was given to me was about three times more than I usually eat. I did not want to offend the cooks, and most meals were irresistible, after developing a taste for them, such as compote, buckwheat soup, borscht, and pierogis. Not wishing to gain 20 pounds, I was diligent in my exercise routine of three hours daily, which could easily be done after teaching for four hours.

Arriving late on Saturday, I was asked to speak at the Sunday morning worship service in the adjacent Church of the Gospel. Fortunately, I had anticipated such an event and I was prepared.

I had four interpreters throughout the week at Kiev Regional Bible College: Katya, two named Oksanna, and Leana. Very few speak English in the area since historically, the Ukraine was cut off from the west. Russian and Ukrainian are the two main languages spoken and written, but young people emphasize that they only wish to speak Ukrainian, which is very similar to Russian. There were a few times when one of the interpreters had no idea what I was attempting to convey, but after attempting to explain in another way, there was no problem.

Ascension Day is strongly emphasized in the Ukraine. On Thursday, May 25, I spoke on a relevant passage from the Bible pertaining to Christ’s departure 40 days after His resurrection. The church services at the Church of the Gospel, which is Ukrainian Baptist, are always meaningful with friendly people and lively singing both from the choir and the attendees.

Meeting for four hours daily, the class was on the topic of Christian discipleship. We made sure to take a tea time break each day. Ukrainians do not drink much coffee, so I made certain to take some coffee packs with me.

One of the students, Vova, asked for prayer that he would be brave in his upcoming deployment to the eastern border to defend the country from Russia. I did not realize before then that there is now an actual war going on and not just a standoff.

The Ukrainians are a peaceful people; however, they have always been subject to the political and economic whims of surrounding countries, which historically have been Germany and Russia. The great Mother Land Memorial on the Dniper River is a massive structure erected in memory of those who lost their lives in World War II. Since 1991, Ukraine has been separated from Russia, but in recent times they have seen Crimea taken over by their oppressive neighbor, and they live in constant fear that the fighting on the Eastern border will escalate and that eventually Russian will attempt to take over the entire country.

The students were attentive and diligent in their work. Most of them work in various positions in their local churches, about a third of the students plan on attending seminary in order to become pastors. Surprisingly, several told me that they had heard of Charlotte, NC because they knew of someone from the area who had relocated there. They genuinely are appreciative of Americans and they have such a wonderful manner in making one feel at home among them even though there are language challenges. I speak German and a few of them know something about this language. But we did do a lot of sign language!

Commencement was an exciting event at 10 a.m. on Saturday, May 27. There were several speakers including myself who challenged the graduates to be strong in ministry and to take their calling seriously. Each of the graduates was presented with a beautiful diploma and a medallion.

One of the highlights of the trip was going to the Sports Arena in the center of Kiev on Saturday afternoon, May 27 to hear an 80-voice choir and 60-piece orchestra, which was one of the best — if not the best — orchestral/choir concerts I have attended. 78,000 were present as the purpose was to pray to the Lord for intervention in the war with Russia and also to celebrate Martin Luther’s posting of the Ninety-Five Theses in Wittenberg, Germany 500 years ago on October 31 of this year. The assistant to the president of Ukraine spoke as well as representatives of many Protestant groups, the Eastern Orthodox Church and Catholic Church, and a Messianic Jewish minister. A representative of the Ukrainian Bible Society gave a message of encouragement to the large crowd. It was truly a dramatic, uplifting and unforgettable service.

Before departing early Sunday, May 28, my students gave me a class picture as well as Ukrainian chocolates. I am grateful for my Ukrainian friends and pray that they will remain strong in their faith and vigilant in their daily lives.