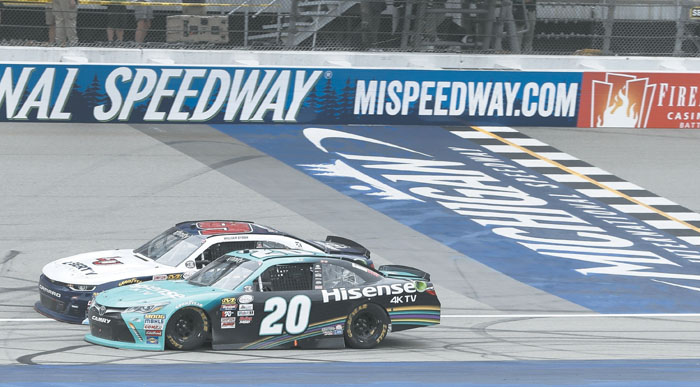 The ending was just as compelling.

Denny Hamlin inched ahead of William Byron on the final turn and nosed out the rookie at the finish line, winning Saturday in the closest NASCAR Xfinity race at Michigan International Speedway since the advent of electronic scoring in the series.

“We went so low down the back straightaway that there was dust and stuff flying off the tires,” Hamlin said.

It was Hamlin’s 16th career Xfinity victory and first in three starts this year, but the 19-year-old Byron made him earn it. Byron led after a restart with two laps remaining, but Hamlin pressured him the rest of the way , and the Cup Series veteran eventually prevailed by 0.012 seconds in his No. 20 Toyota.

The two cars crossed the finish line next to each other, with Hamlin barely ahead on the inside.

“It was a lot of fun,” Byron said. “He just had enough air down there to get to the side of us, and it was just a race to the line after that.”

Elliott Sadler was also in the mix during the final lap and finished third in the 125-lap, 250-mile race. He took over the series points lead from Justin Allgaier.

Busch and Keselowski were 1-2 after qualifying, giving this Xfinity race a couple of big names at the front. Seconds after the start, Busch drifted slightly to the right, and Keselowski made contact from behind on the outside.

“I don’t think he knew I was there,” Keselowski said. “I lifted the best I could, I guess I just didn’t do a good enough job lifting. I was already pulling up alongside of him.”

Keselowski finished fourth and Busch was fifth. Keselowski and Sadler were in first place after the first and second stages, at 30 laps and 60.

Hamlin was ahead by about three seconds before a late caution for debris, and the restart with nine laps remaining kicked off a wild finish. Byron came away with the lead, only for another caution to come when Matt Tifft went spinning.

Byron held on gamely after the last restart, but the 36-year-old Hamlin was too tough.

“Super glad to have the experienced guy in the seat,” said Chris Gabehart, Hamlin’s crew chief. “William Byron, with years, will gain that, but a guy like Denny Hamlin is able to think through every second of that at 190 miles an hour and know exactly where he needs to be at each second, and that’s why we’re here today.

“We had a fast car, and think we were going to win it either way, but when it came down to experience at the end, I’ll take him.”

Hamlin will try to add another win for Joe Gibbs Racing when he competes in Sunday’s Cup race. Byron, meanwhile, will have to keep trying for his first Xfinity win. His best previous finish was fourth, and this effort earned him quite a bit of respect.

“Let’s see: I was 19, I think I was working at Subway making sandwiches. That or working at my dad’s trailer shop,” Hamlin said. “I can’t relate, honestly. To be at this level at the age that he is, it’s a huge advantage for him for the next 20 years, 25 years. He’s going to be starting his curve a lot earlier. … I’m sure by the time he’s 24, 25, he’ll be contending for Cup championships.”