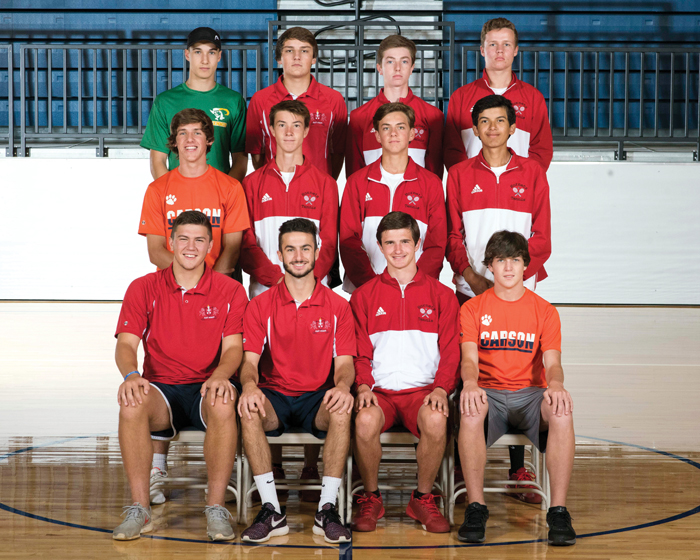 SALISBURY — Spend a few minutes with Robert Gray and you’ll be drawn to his easy-going, Sunday-morning-in-your-pajamas nature — but don’t be fooled.

The recent East Rowan graduate can play that role in his sleep.

“Easy-going, but not quiet,” he said last month, just a few days after being named Rowan County’s boys tennis Player of the Year. “I’m a pretty open guy and I love to mess around. I don’t like being quiet.”

Gray had a loud impact on the courts this past spring. Although East finished with a pedestrian 7-6 overall record (4-5 in the South Piedmont Conference), he wasn’t taking a backseat to anyone — and his numbers elucidated as much. He won 11 of his 13 matches at first singles, advanced within a victory of a 3A state tournament berth and sported a 9-3 mark in doubles play.

Winning the POY? That was dessert for a job well done.

“I actually found out about it on Twitter,” he said with a boyish smile. “People were telling me that (Post sports writer) Mike London had tweeted something about me. One of my friends (Wesley Porter) told me to check it out.”

When he did, Gray was appropriately surprised. “I was shocked, really happy,” he recalled. “I thought it would be one of the Salisbury guys because their record was a lot better than ours. They had a much more successful season than we did.”

Perhaps, but voters recognized Gray for blossoming two years after suffering a torn right ACL injury and one year after logging a 14-1 record as East’s third-singles player.

“Third …singles. That’s where I started out this year,” he said. “I only had to make my way up two seeds, so it only took two matches.”

East had graduated six of its top seven players from its 2016 squad, leaving Gray a clear path to the top. He won his first five matches this spring, 10 of his first 11 and was named to the all-SPC team. He captured 23 of 27 sets before his season ended with a loss to Marvin Ridge’s John Hatalla in the second round of the 3A Midwest regionals.

“If I’d won that match, I would have gone to states,” Gray said. “It was disappointing, but I couldn’t do anything about it. That’s how the draw went and he deserved it. I would have had to play the best match of my life to beat him.”

Gray accepted the loss with dignity, something his teammates readily acknowledged.

“He’s such a tough competitor,” said East’s Sawyer Russell, Gray’s expected roommate when both enroll at Western Carolina in August. “He’s fun-loving, never in a bad mood unless he starts to mess up on the tennis court. He overthinks sometimes, but always seems to come out on top.”

Tre Dry, a rising senior at East, offered more enlightenment. “This year, he had tennis elbow but played right through it,” he said. “And some of his matches were long. He’s that tough.”

It shouldn’t surprise anyone that Gray also played left back for the Mustangs’ soccer team and wrestled as a 145-pounder for the first time last winter.

“Wrestling season was not easy,” he quickly indicated. “I’m surprised I lived through it. Between practice and everything else, it was a lot harder than I thought it would be. But still, I loved it.”

Gray said he’ll pursue a degree in one of the science fields at Western Carolina, but tennis may become secondary to school work.

“I was going to try to walk on, but found out they don’t even have a tennis team,” he said with a hint of disappointment. “I may try to form a club team or just find one in the community. Either way, I’m going to just enjoy my first year and see how I like it.”

He’ll bring the same relaxed demeanor that has distinguished him both on and off the tennis court.

“It’s an individual sport. That’s what I love about it,” Gray said. “All I have to worry about is me winning, nobody else. It’s me in control. I’m the one who decides the outcome.”

It’s precisely how he prevailed in the recent Salisbury Rotary Spring Tennis Tournament — and the Post’s Player of the Year competition.