World’s top three golfers miss cut at the US Open 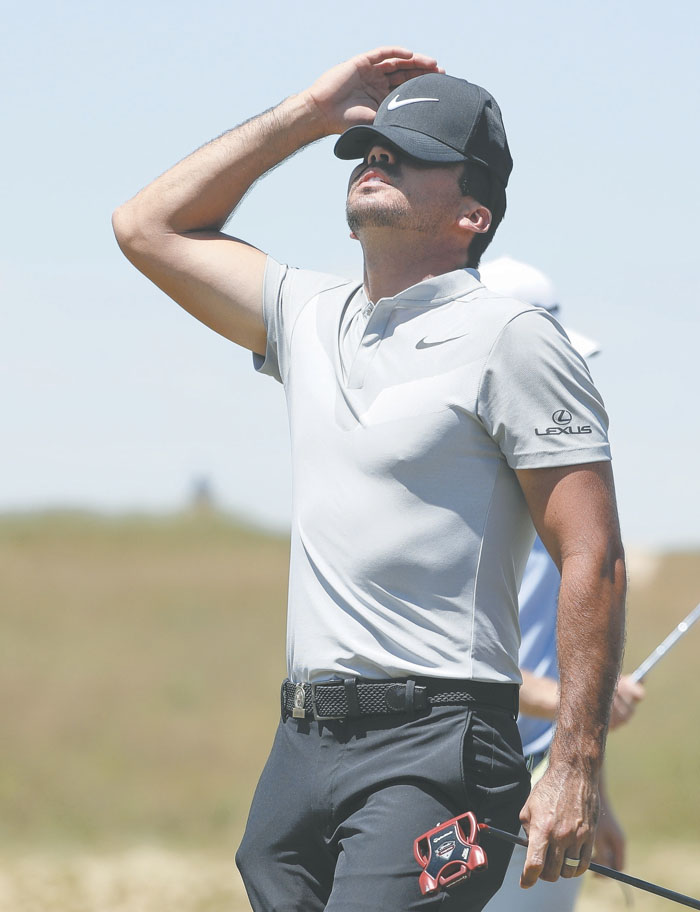 Jason Day, of Australia, reacts on the ninth hole during the second round of the U.S. Open golf tournament Friday, June 16, 2017, at Erin Hills in Erin, Wis. (AP Photo/Chris Carlson)

ERIN, Wis. (AP) — An 11-year-old golf course shaped from Wisconsin pastureland was sure to bring something different to the U.S. Open.

This might have been more than anyone was expecting.

The four players tied for the lead — Paul Casey, Brooks Koepka, Brian Harman and Tommy Fleetwood — created the largest 36-hole logjam in 43 years at the U.S. Open. None has ever won a major, and neither have the next 14 players behind them.

On the longest course ever for a major, the cut was the lowest at the U.S. Open since 1990.

And for all the birdies and blunders at Erin Hills, the most compelling image Friday came from the parking lot, where one star after another left town after missing the cut.

It was the first time since the world ranking began in 1986 that the top three players missed the cut in any major.

Eight of the top 12 players in the world won’t be around for the weekend at Erin Hills, leaving a tournament as open as the land on which it was built.

Casey chopped his way to a triple bogey, only to respond with five straight birdies that carried him to a 1-under 71 and make him the first to post at 7-under 137. He set the target early under warm sunshine, and even as the wind tapered in the afternoon, no one could catch him.

Koepka had the lead until he turned a birdie chance into a bogey on the par-5 first hole after making the turn. He didn’t make a birdie the rest of the way and had to settle for a 70. They were joined by Harman and Fleetwood, who each had a 70.

Right behind was a trio of players that included Rickie Fowler, who went 28 holes before making his first bogey and then went three holes without making a par. Fowler shot a 73 and was still very much in the hunt at a second straight major.

The four-way tie was the most after two rounds in a U.S. Open since Winged Foot in 1974, back when the names were more familiar for a major — Raymond Floyd, Arnold Palmer, Gary Player and Hale Irwin, who went on to win his first major.

The last six majors have been won by first-timers, and that cycle has a good chance to continue. The top 18 players on the leaderboard going into the weekend have combined for zero majors. Only a half-dozen of them have even experienced Sunday contention in golf’s biggest events.

“Tomorrow will be a very cool experience,” Fleetwood said. “It’s still Saturday — 36 holes is a very long time in a U.S. Open. Anything can happen.”

Just about everything already has at Erin Hills.

A commercial blimp crashed to the ground and caught fire just outside the course Thursday, about the time the county health department was analyzing samples that confirmed evidence of the E. coli bacteria in water at a hydration station near the 12th hole. The USGA is providing complimentary bottled water the rest of the week. There have been no reports yet of anyone getting sick.

And then Friday, a 94-year-old man at the tournament for the first time stopped breathing while in a grandstand on the sixth hole and died of what Washington County officials said appeared to be natural causes.

Johnson was hitting it so well that he appeared to be safe even when he was on the cut line. But then he three-putted from long range on the 13th and the 14th, and lost all hope when he missed the green on the 17th while going after the flag. He shot 73 and missed the cut by three.

Day never had a chance, following his career-worst 79 in a U.S. Open with a 75. McIlroy came to life when it was far too late. He made four birdies over the last six holes to salvage a 71, but he still missed the cut for the second straight year.

Fowler has the best chance, even though he lost so much ground over the final two hours. He went from pouring putts into the center of the cup to burning the edges, and his 39 on the back nine cost him the lead, though not his chances of breaking through for that first major.

“We’re in a good spot,” Fowler said. “Looking forward to the next two days.”

Casey discovered how little it takes to make a big number in the U.S. Open — and at this U.S. Open, how a recovery is never too far away.

Casey laid up in the rough, took two chops to get out of more rough behind the 14th green, and staggered away with a triple-bogey 8 that might have ruined his day at Erin Hills. Moments later, he began a run of five straight birdies that put him right where he wanted to be going into the weekend.

“Not every day you enjoy a round of golf with an 8 on the card, but I’m a pretty happy man,” Casey said. “Yeah, it was a bit of a roller coaster. I guess it’s rare you get through a U.S. Open or any major without some kind of a hiccup.”