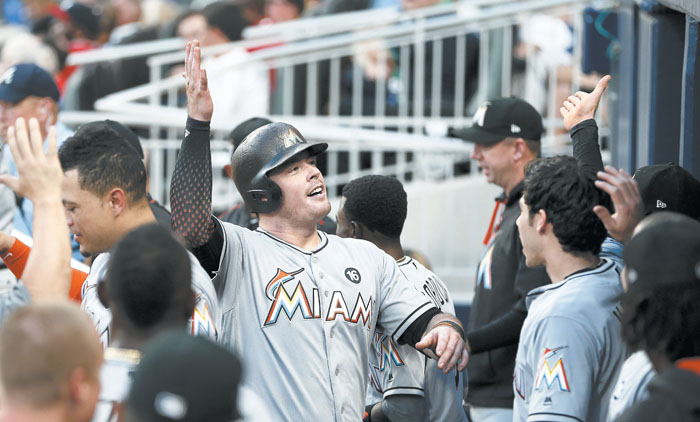 Miami Marlins first baseman Justin Bour, center, celebrates in the dugout after hitting a solo home run in the fourth inning of a baseball game against the Atlanta Braves, Friday, June 16, 2017, in Atlanta. (AP Photo/John Bazemore)

He vividly remembers the rough stretch last month when Miami lost 13 of 15.

“If you saw us a month ago, it wasn’t pretty,” Gordon said. “Now the difference is we’re just playing hard and playing hard for each other.”

Gordon went 3 for 5 and Justin Bour homered in his first game back from the disabled list as the Marlins moved into second place in the NL East, 10 games behind Washington. Miami has won 13 of 18.

Straily (5-4) was coming off his second-shortest outing of the season, but he kept the Braves guessing most of the night, allowing just four hits and striking out eight in 6 1/3 innings.

Bour, reinstated from the 10-day disabled list before the game after missing nine games with a left ankle contusion, picked up where he left off. Since April 30, he is hitting .368 with 14 homers and 32 RBIs.

Newcomb got no support from his offense.

After scoring 29 runs in winning two of three at Washington this week, the Braves were punchless at the plate. They had one runner in scoring position — Ender Inciarte in the first — and missed a chance to tie it in the fifth when Dansby Swanson’s long fly ball sailed just outside the left field foul pole.

Yelich had an RBI double and added a two-run single in the ninth. Bour’s 17th homer made it 2-0 in the fourth. Miami led 3-0 in the sixth on a double play grounder.

The Braves have lost eight of 11 at home and have scored just nine runs in their last six games at SunTrust Park.

Gordon stole two bases to break a tie with Washington’s Trea Turner and move into second place in the majors with 23 steals. Cincinnati’s Billy Hamilton has 28.

Braves: LF Matt Kemp is listed as day to day with a sore left hamstring and hopes to avoid the 10-day DL for the second time. Snitker said the team will wait a couple of days before reassessing Kemp’s condition. Danny Santana took his spot in the field. … Snitker added that RHP Bartolo Colon, on the DL with a strained left oblique, won’t make a rehab appearance and is likely to start Wednesday against San Francisco.

Marlins: LHP Jeff Locke (0-2) has a 5.44 ERA and two wins in eight career starts against Atlanta.

World’s top three golfers miss cut at the US…