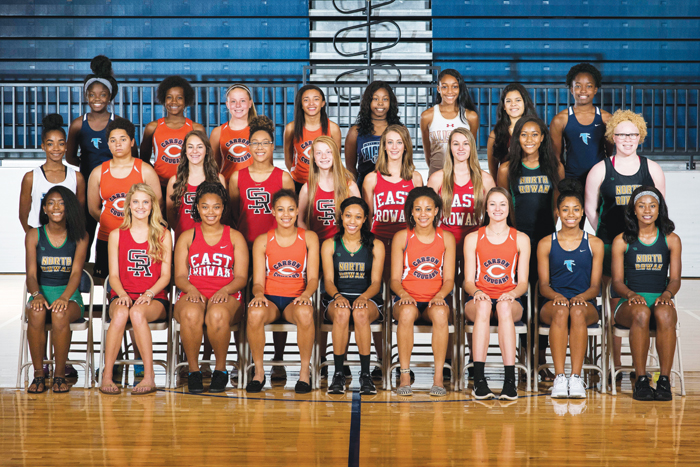 SALISBURY — North Rowan’s Payton Russell is excited about being Rowan County’s track athlete of the year for the third straight year, but may be more excited about her future at N.C. A&T State University.

“I am definitely excited to have graduated, but I am going to miss high school,” said Russell. “I’m going to miss my teammates, my coaches, and everyone that’s been so helpful to me these past four years.”

At N.C. A&T, Russell will be not only continuing her education, but her track and field career.

“I just really loved the coaches and I loved the team,” said Russell. “I feel like we really connected, and so it made me really chose them at the end of the day.”

Another factor for Russell when it came to choosing a college was N.C. A&T’s engineering program. She’s also a top-notch student, selected as an All-Rowan County scholar from North Rowan in the Salisbury Post’s recent graduation section.

“I like their engineering program because I want to be an engineer and their program is top of the line, so that was the big factor for me education-wise,” Russell added.

Russell has wasted no time setting goals for her future with the Aggies. Her biggest goal is to qualify and go to NCAA nationals. She also wants to be a part of a relay team that is very successful.

“Another factor for me was that they have a really good track team, and I know I can improve there,” she said.

“I think the hardest thing will be me just adapting to college life, just because I’m like an only child,” continued Russell. “I will have to be able to connect with other people, sharing a room, being able to be like somewhat of an adult, not depending on my parents as much,” continued Russell.

Russell first realized she wanted to run collegiately during her freshman year at North Rowan.

“Coming up from middle school, I thought I was going to be a basketball player, but after freshman year, I realized basketball is not for me and I should stick to track.”

“I think it went pretty well for me,” said Russell. “I think I could have improved a little more in my outdoor season, but I was very happy with my indoor season.”

Out of all of her races, Russell says that her title in the 400 meter race during her sophomore year at the state meet was her best one.

“I had PR (personal record) and that was my first state championship,” added Russell. “And, I also set the meet record.

Things have not always been smooth sailing for Russell. Her biggest challenge has been battling a hamstring injury.

Russell said that she has also struggled with confidence, but with the support of her family, coaches and teammates constantly reminding her of her abilities, it started to process in her head.

Russell learned about track and field in the second grade when her teacher realized she was faster than her classmates.

“I was just running around and playing and I was just beating all the boys and stuff and my teacher, she recommended that I start running track, like as a sport, not just for fun,” she remembers.

When Russell first started running, it was a linear progression. She was one of the youngest girls on her team, and while she was not the fastest at first, she soon became the fastest.

During the school year, Russell attended two practices a day during the week. Her first practice was right after school at North Rowan, and her second practice was with her AAU team, the Salisbury Speedsters.

Now, Russell turns the page from a dominant high school track athlete to a Division I recruit. For those who have watched her run, her future successes will not surprise anyone.

Rebecca Parker is a journalism student at Georgia Southern University. A West Rowan graduate, Parker was the 2014 Rowan County girls track athlete of the year and shared the honor in 2013.

Prep Softball: Falcons are co-players of the year