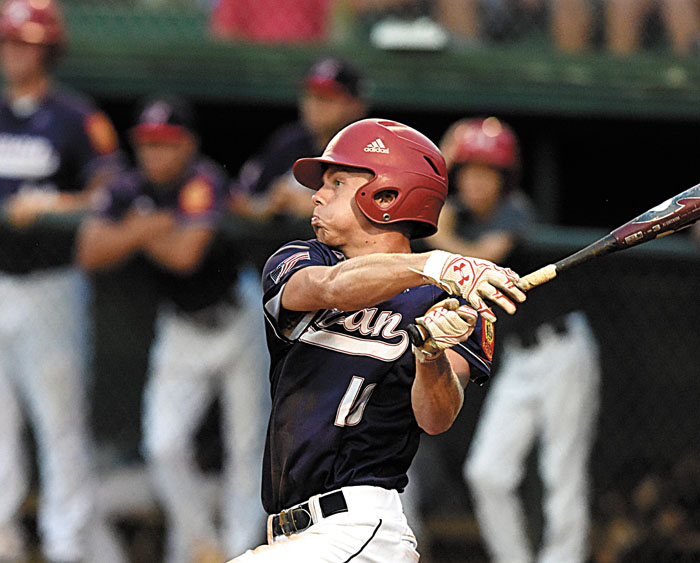 Wayne Hinshaw/for the Salisbury Post ... Rowan’s John Owen, shown hitting during an earlier game this season at Newman Park. Rowan won on Saturday against Florence (S.C.), 2-1, to improve to 14-0.

SUMTER, S.C. — The Rowan County American Legion team earned its strongest win of the season on Saturday afternoon, holding on for a 2-1 victory against Florence, S.C., in the marquee game in the North Carolina-South Carolina Challenge.

Both teams are defending state champions. Both teams entered the game unbeaten this season.

Olen Stamper pitched six shutout innings for Rowan, while Pearce Wilhelm worked himself in and out of trouble for a high-pressure save to close the seven-inning contest. Wilhelm nailed down the final out with the bases loaded.

Rowan managed eight hits, including RBI singles by John Owen in the third and Chandler Blackwelder in the seventh. Both run-scoring hits came with two men out. Blackwelder and Henderson Lentz had two hits each.

Rowan (14-0) went undefeated in the Challenge for the first time. Rowan has participated in the event four times.

Florence (15-1) has been scoring tons of runs and may be one of the best teams in the South. Florence mauled Rowan in the Challenge last season, scoring 17 runs, although Rowan avenged that setback when the teams squared off in a rematch in the Southeast Regional.

Rowan had two singles in the first inning, but Florence’s 6-foot-4 right-hander Blake Robinson, who came in with an ERA of 0.64, defused the threat with a pickoff.

Brandon Walton opened the second inning with a booming double to left-center. He moved to third base with one out, but he was stranded there.

Stamper walked two batters in the bottom of the second, but catcher Trevor Atwood picked off a straying baserunner to help keep the game scoreless.

Rowan went on top, 1-0, in the third. No. 9 batter Will Brown punched a single to right and everyone was safe on Blackwelder’s bunt toward first base. Lentz moved up both runners with a sacrifice. With two out, Owen’s high chopper resulted in an infield hit, and Brown crossed the plate with the game’s first run.

Stamper would keep it 1-0 for a long time. He got more help from Atwood in the fourth when the  backstop erased a leadoff single with a strong throw to shortstop Griffin Myers to thwart a steal attempt.

Stamper did his grittiest work in the fifth after an error, a bunt single and a sacrifice put Florence runners at second and third with one out. Stamper, a rising senior at West Rowan, got an infield popup, and then an inning-ending strikeout of No. 3 hitter Lex Tuten, a North Greenville signee.

In the Rowan seventh, Chandler Lippard was hit by a pitch leading off the inning, and pinch-runner Brycen Holhouser stole second base on a close play. Myers’ sacrifice bunt advanced Holshouser to third. Pinch-hitter Brett Graham hit a fly ball to shallow left for the second out, but Blackwelder singled to right against reliever Joshua Price to plate Holshouser for a 2-0 lead. Rowan went on to fill the bases, but Price escaped further damage by striking out Owen.

Wilhelm relieved Stamper to begin the bottom of the seventh and got a quick strikeout. But he plunked No. 9 batter Jon Carter with a pitch and walked leadoff man Zay Paul. Wilhelm got a ground ball for a fielder’s choice and the second out, but Tuten’s sharp single to left made it 2-1. A wild pitch moved two baserunners into scoring position, and the tension mounted, as Wilhelm pitched around lefty cleanup hitter Will Hardee with a walk that filled the bases.

A popup to first baseman Walton ended the game, and Rowan fans had cause to celebrate.

Boxscore is in Scoreboard.