Edwards and Childress fail to move up at NC Amateur 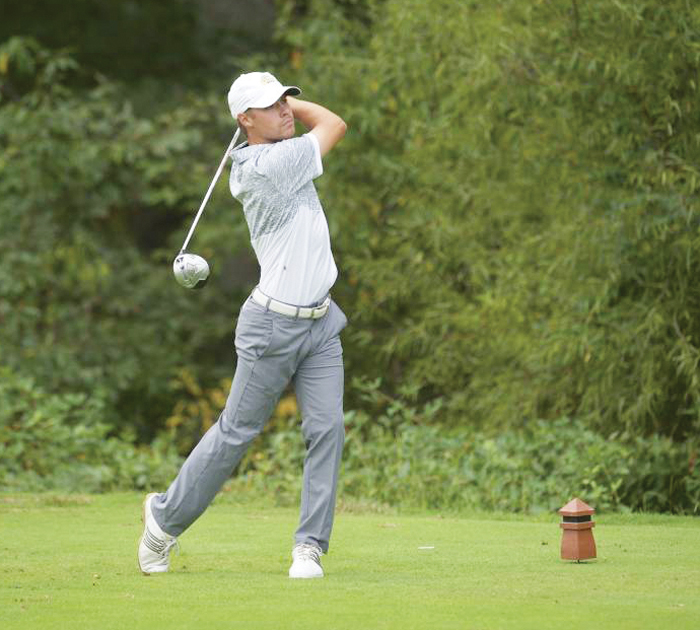 GMU file photo Eric Edwards, of Salisbury, is 25th after three rounds of the N.C. Amateur, being held in Davidson.

Eric Edwards and Michael Childress, both of Salisbury, were in the top 30 as Saturday’s “moving day” at the 57th North Carolina Amateur began at Davidson’s River Run Country Club.

Both golfers shot 3-over par 75 during the third round to remain pretty much where they started the day.

Edwards, a senior at George Mason University, is tied for 25th going into today’s final round, 6-over par for the tournament and 12 strokes behind leader Justin Tereshko, who carded a 68 yesterday.

Childress, a senior at Cannon School in Concord, is tied for 31st, 8-over par for the event.

Lyerly became the youngest ever to win the N.C. Amateur, last year at Governor’s Club in Chapel Hill. His four-round score was 8-under par 280.

Edwards entered Saturday’s third round in a tie for 20th, still within striking distance of at least the top 10, if not more. But he didn’t have the start he needed, bogeying the first hole.

Sixteen holes later, Edwards suffered his only double bogey in three rounds, turning a possible 1-over par 73 into the score of 75.

“I got off to a bad start,” said Edwards. “I hit a bad drive on the first hole and ended up making bogey and the second hole, you kind of have to take advantage of, but I just didn’t.”

Edwards was referring to the 527-yard par-5 second hole at River Run, where he chipped in for an eagle on Friday. He settled for a par there yesterday.

“The two par 5s on the front side are very scorable and I just couldn’t get anything going on those two holes,” added Edwards. “I kind of struggled on after that, missed the green on No. 7 and couldn’t get up and down. I just didn’t hit the ball close enough to make a lot of putts … just one of those days.”

“The three-putt on 17 that cost me a double — I definitely didn’t need that.

“I made a very long putt for the birdie on No. 5 for birdie and I thought that I might get things going but No. 6 is the other par 5 that is very scorable and I had a bad drive and had to lay up,” continued Edwards. “I had a good chance at birdie but just didn’t convert and that was kind of the story of the day. It’s just tough to get things going when you’re not making anything.”

Meanwhile, the 17-year-old Childress had a strong third round going at 1-under par — until a bogey on the par-3 8th hole and a double bogey on No. 9, a par-4.

On the back nine, Childress played solid golf, eight pars and just one bogey. He said later that he missed several short putts that would have made a big difference in his score and standing.

Childress finished with a 75 after the morning round and then headed to China Grove for the second part of his busy day.

In the afternoon, Childress fired a 67 during qualifying for the Rowan Masters at Warrior Golf Club (see page 2B).

“It was a long day,” Childress said last night. “River Run is playing extremely difficult, of course, for the N.C. Amateur, so it was almost relaxing go play the Warrior and be able to really go after some pins.

“River Run’s greens are firm and fast and the rough makes staying in the fairway a huge premium,” continued Childress. “But I feel good about where I am and hope to make a good move tomorrow (Sunday).”

Tereshko, of Greensboro, takes a three-round score of 210 into today’s play, and a three-stroke lead over Lansdon Robbins, of Davidson.  Robbins is actually a teammate of Childress at Cannon School.

Three other Rowan County golfers were in the N.C. Amateur, which began Thursday. Logan Shuping, Davis Richards and Kevin Lentz were all below the cutline after Friday’s second round.

After 36 holes, the field is cut to the low 60 scores and ties for the final two rounds.

Edwards, who qualified for the United States Amateur last summer, will attempt to do so again this summer at Carolina Trace Country Club in Sanford.

He is also looking forward to his senior golf year at George Mason before hopefully taking the next step — professional golf.

“Turning pro has always been the goal, but I will use this year to see how ready I will be to do that,” said Edwards. “If the opportunity is there, why not? I have devoted a large amount of my life towards the game of golf, so I owe it to myself to give it a shot. But I’ve got to get my game up to a higher level and I know that.”

Edwards, a Dean’s List student at GMU who is on schedule to graduate next May, is living in Salisbury this summer and working with his swing coach, Brian Lee, the professional at the Warrior.

“Brian and I started working together seriously last summer and I’ve noticed a dramatic improvement,” added Edwards. “He’s an awesome guy and I’m grateful for the opportunity to work with him and to be able to play at the Warrior as well. He does a lot for junior golf in the area and he did a lot for me as I was coming along, too.”