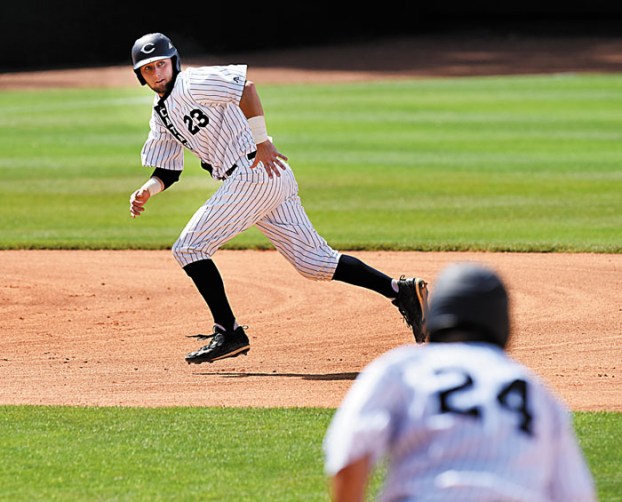 Wayne Hinshaw/for the Salisbury Post ... Zac Almond (23), shown running the bases during a Catawba game this spring at Newman Park, was selected by the Arizona Diamondbacks on Wednesday in the MLB Draft. Almond, a junior catcher, left for Arizona almost immediately. JON C. LAKEY / SALISBURY POST
Catawba catcher Zac Almond, shown during a game against UNC Pembroke at Newman Park on March 1. Almond was drafted by the Arizona Diamondbacks during the recent MLB Draft.

Almond, a big, howitzer-armed catcher whose defense is at least as good as his offense, had completed a spectacular junior season for the Indians with 17 homers and 61 RBIs in 53 games. A second team All-Southeast Region selection, he had reasons to believe he would be drafted relatively early by the Colorado Rockies.

The Rockies had shown the most intense interest in the days preceding the draft, but the calls Almond was fielding on Wednesday, as the draft progressed into the 20-something rounds, were coming from the Kansas City Royals and Arizona Diamondbacks.

Basically, both organizations wanted to know the same thing.

“What was the bottom dollar that I would take?” Almond said. “Would I still sign so late in the draft? Both teams were in communication with me, on and off, all day. About the 30th round, the Diamondbacks called back and asked if I’d sign for a certain bonus amount, plus paying for school, and I told them that, yes, most likely I would take that.”

In a scene right out of a movie, Almond’s mother, Stacy, arrived home from work at the same time that her son was selected by the Diamondbacks, and she was able to share that moment with him.

He was Arizona’s 35th-round pick. There were 1,041 players picked ahead of him.  That provides some fuel for the 21-year-old prospect to prove he was underrated. The bottom line is he has a chance to play professional baseball. Almond flew to Arizona on Thursday morning for a physical and to sign his first contract.

A cracked bone in his right hand that Almond suffered late in Catawba’s season probably sent him spiraling down some teams’ draft boards. He believes the injury and uncertainty about the timetable for his  recovery hurt his stock.

“Some scouts wanted to know why I wasn’t playing anywhere this summer,” Almond said. “I injured the hand when I was hit by a pitch in an intrasquad game before we played USC Aiken (on May 6), and it affected me some in our five games in the regional.”

That explains why Almond went 2-for-18 in the regional, reducing his final batting average from .387 to .364.

The good news is the hand has healed, and it shouldn’t have any impact on Almond’s hitting or throwing as he makes his pro debut with a Diamondbacks farm club in Arizona, Montana or Oregon. He’s hoping for Montana or Oregon because it’s going to be steaming hot in Arizona.

Even with his regional mini-slump, Almond (6-foot-3, 210 pounds) finished in the top 25 in Division II in homers and RBIs. He also smacked 18 doubles and enjoyed a 20-game hitting streak.

“He didn’t just hit for good numbers, he got big hits at crucial times,” Catawba coach Jim Gantt said. “He’s got two strong tools — power and a big-league arm. He shut down running games to the point that our opponents didn’t even try to run on us. He’s a good athlete.  He runs well. We put him in the outfield to rest him some, and he was a very good outfielder.”

Almond is from Richfield, a rural Stanly County town of 600 or so, not far past Pfeiffer University on Highway 52. He was introduced to baseball by the time he was 5. He played against Albemarle’s Bryan Blanton when they were youngsters, and then became Blanton’s travel-ball teammate in fourth or fifth grade. Almond and Blanton would become college teammates at Catawba and would be drafted on the same day by MLB, with Blanton going to the New York Yankees on the 21st round.

Almond’s favorite player always was Yankees shortstop Derek Jeter, but Almond’s size and strength gradually moved him behind the plate.

He was a terror as a senior at North Stanly High, batting .443 with eight homers and 33 RBIs and making the All-State team.

Gantt saw Almond play for the first time when he was swatting balls out of the park for the Stanly County American Legion team, but Gantt was realistic enough to know he didn’t have a chance to recruit him for Division II Catawba. Almond’s size and arm labeled him as a certain Division I player. He signed with UNC Greensboro.

“Almond’s arm was so good that I wondered why they didn’t put him on the mound,” Gantt said. “But then I saw him hit — and I understood why he was playing a position.”

Almond saw limited duty for UNC Greensboro as a freshman in 2015 — 5-for-25 in 16 games — and Gantt was thrilled to add him as a transfer.

As a Catawba sophomore in 2016, Almond rotated in the outfield and behind the plate with All-American Will Albertson, who is now catching in the San Francisco Giants farm system. In 181 at-bats, Almond belted 13 homers. His batting average was a modest .271, but he was clutch. He produced 40 RBIs with just 49 hits.

Almond alternated torrid and frigid spells as a sophomore, but after a strong summer in the wood bat Coastal Plain League, he came through with a consistent junior season that elevated him to being one of the best players in the region. Almond arguably was the second-best offensive player in the South Atlantic Conference. He had nearly as great a season as All-America teammate Luke Setzer.

“Zac made a run at a whole lot of accolades down the stretch,” Gantt said. “Now it’s going to be fun to see just how good he gets with baseball being his job for eight hours a day. He’s got the ability and the work ethic to excel as a pro.”

For Almond, two years at Catawba were life-changing.

“I owe Coach Gantt a lot,because he showed a lot of belief in me that I could play the game,” Almond said. “My two years at Catawba were the two best years of my life. Catawba helped me tremendously, and there’s nothing I wouldn’t do for that school or for any of my coaches or teammates.”

Catawba has had at least one player drafted in each of the past six seasons and nine of the past 10 seasons. Two of those picks, Jerry Sands and Jordan Jankowski, have played in the majors. Reliever Craig Brooks, a seventh-round 2015 draft pick by the Chicago Cubs, is now in Double-A.

Edwards and Childress fail to move up at NC Amateur

By Dennis Davidson dennis.davidson@salisburypost.com Eric Edwards and Michael Childress, both of Salisbury, were in the top 30 as Saturday’s “moving... read more