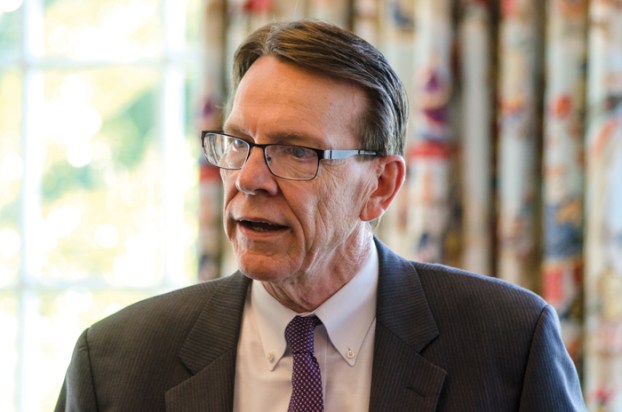 After 12 years as president of the Wayne Economic Development Council in Wooster, Ohio, Rod Crider has joined the ranks of RowanWORKS.

And although he’s been on the job for only eight days, he says that North Carolina is already starting to feel like home.

“So let me just say how glad I am to be here,” he said in a speech Thursday night at the Country Club of Salisbury. “I saw, as I investigated your community and talked with my colleagues around the state of North Carolina, that you have tremendous potential here.”

That potential, he said, is based on a number of things: the county’s leadership, location and resources being just a few.

“I was particularly impressed by the leadership of this community and the things that have been done over the past particularly two to three years to position yourselves for economic growth,” Crider said. “As well as you have some things here that I was running out of in Ohio, which is sites and workforce.”

Those factors – as well as Crider’s optimism for the community – are giving business owners such as Alisha Byrd of Byrd Staffing hope for the future.

“I really believe that he’s here to move the train in the right direction, and so we’re looking forward to seeing exactly what he has to offer and bring in more jobs to Salisbury,” Byrd said Thursday. “We are very excited to have him and ready to support him in any and every effort that we can.”

For Byrd, whose work is primarily based on finding jobs for people with criminal records, economic development means attracting companies that might be open-minded enough to hire her clients.

“A couple of them have been in the Concord area, so here we haven’t been given an opportunity,” Byrd said. “But with the skill set that Rod has, we can turn those type of things around.”

Byrd also said that Crider seems like the type of person who would allow local business owners to knock on his door whenever they have questions or concerns.

RowanWORKS is at 204 East Innes St.