Prep Softball: Falcons are co-players of the year 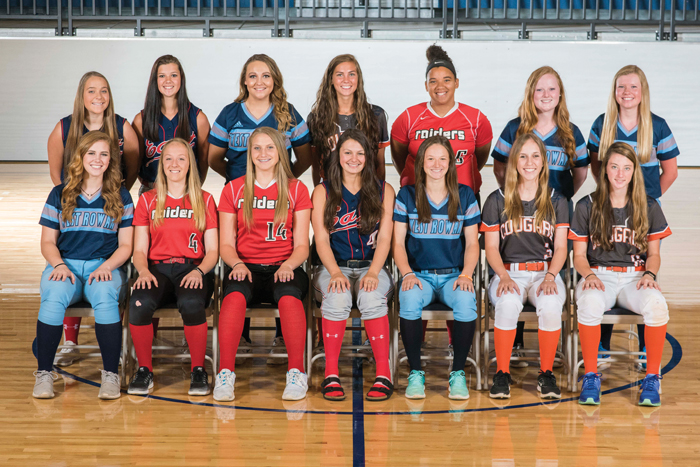 SALISBURY — The rest of the county closed the gap some on West Rowan softball in 2017, with South Rowan splitting with the Falcons and Carson avenging two lopsided, regular-season losses to West with an extra-inning victory in the South Piedmont Conference Tournament.

Still, the Falcons turned in the county’s best season, going 13-7 overall and 13-5 for fourth place in the SPC, a league which had three very stout teams in Hickory Ridge, Cox Mill and Central Cabarrus.

Carson (15-12) actually won more games than West but went 9-9 in the league for fifth place.

“It wasn’t a great season, not by the high standard we’ve set,” West coach Jimmy Greene said. “But it was a pretty good season with a very young team.”

There wasn’t a clear-cut Rowan County Player of the Year of this time. There was no one who dominated as a two-way player as Peyton Greene did for the Falcons in 2016 or pounded the ball over the fence as frequently as West shortstop Hunter Gibbons did in 2014 and 2015.

Coach Greene lobbied for co-players of the year in West’s sophomore shortstop Mary Sobataka and junior catcher Parker Greene and made a persuasive argument. Besides playing the two most critical defensive positions (other than pitcher), they put up enormous offensive numbers in a competitive league.

West averaged nearly eight runs per game for the season and averaged 7.7 runs in its seven games against Carson, East and South, so the Falcons were swinging the bats.

West played only 20 games — Carson played 27, while South played 25 — but stats posted on MaxPreps indicate Greene scored a county-leading 30 runs scored while batting .508. Greene and Sobataka, who hit .452, tied for the county lead with 28 RBIs. Both hit with considerable power. Greene led the SPC in slugging percentage and had eight doubles, three triples and three homers. Sobataka had five doubles, a triple and four home runs.

“They’re two of the most talented girls in our county, region and state,” Coach Greene said. “They were our two girls on all-conference and they should make all-district and All-State when those teams come out.”

Parker Greene has surpassed 100 career hits and Coach Greene, her father, said she’s the first to reach that milestone as a junior at West in the last decade. Gibbons and last season’s Rowan County Athlete of the Year, Taylor Martin, did it as seniors.

“Parker can hit the ball in the gaps, but she also has the speed to beat out an infield hit even when she mis-hits the ball,” Coach Greene said. “When she gets on, she’s an aggressive baserunner and stole 13 bases. She was a stud behind the plate, controlling our defense. Her presence is as strong behind the plate as it is standing beside it to hit.”

Playing for a parent/coach can be one of the more challenging endeavors in sports, but Parker has handled things calmly.

“You’re always going to have that love/hate relationship when your dad is coaching you,” Parker said. “But I appreciate him pushing me.”

Parker wasn’t thrilled with West’s season, which included first-round exits in the SPC tournament and playoffs, but she understands that it was a rebuilding year.

“We had to replace some great players like my sister, Peyton, and Taylor Martin, but a lot of our youngsters came a long way,” Parker said. “We’ve got a chance to be really good next season.”

“Parker has been self-motivated and mature since she was a freshman,” Coach Greene said. “The only negative with her is she can be too hard on herself. She holds herself to a high standard.”

Parker has the potential to be a good college softball player but isn’t sure about her future. She may focus on academics, studying either biology or animal science.

“I’m open to playing softball in college,” she said. “But I’ve also got a real passion for FFA.”

Even after two good basketball seasons and two outstanding softball seasons, Sobataka remains a bit of a tongue-twister.

Asked for his opinion on the county’s best player, one opposing head coach said, ‘West Rowan’s shortstop. Mary something.'”

“Mary Something” is good enough that she’s committed to Coastal Carolina University as a sophomore.

Beyond the offensive stats, which included a pair of games with six RBIs, she was a whirlwind on defense, stabbing line drives and scooping difficult grounders. She’s a versatile player, a third baseman/outfielder on her travel ball team, but she’s a fixture at shortstop for the Falcons.

“She was as good as anyone in our conference defensively, greatly improved from her freshman year,” Coach Greene said. “Great hands and great speed and her footwork is fantastic. Our defense won a lot of games for us, and in a lot of games Mary made special plays.”

Like Parker Greene, Mary grew up with an older sister to learn from  and follow. Mary’s sister, Alison, just finished playing four years of college basketball at Columbia College (S.C.).

“She’s one of the reasons I have the drive to play sports, as well as the love for it,” Mary said. “I’m competitive, and I always want to be the best I can be.”

Coach Greene said Sobataka has been a joy to coach, win or lose.

“There are a lot of standout athletes,” he said. “But Mary has that standout attitude to go along with it. No one has ever coached a better kid. She’ll do anything she can to help her team win and make her team better.”

“Even with all the new girls, we knew what we had to do and we still went out and had some success,” she said. “We swept Central Cabarrus, and that was a pretty big deal. They had a great team.”

Katie Jewell led Carson with 18 RBIs. Rylie Stewart was a strong, two-way player, going 10-7 with 84 strikeouts in the circle and  batting .368 with 14 RBIs.

South freshman Whitley Arnott is a player to watch. She led the county with 102 strikeouts. Slugger Mataya Reynolds batted .406 with four homers and 18 RBIs.